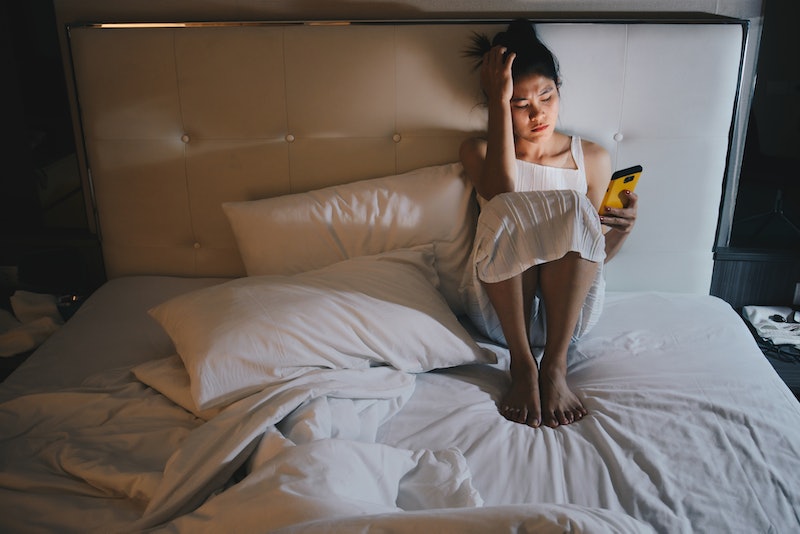 Don't you just hate those mornings when you wake up and feel anything but well-rested? Unfortunately, your nighttime texting habits may be to blame — researchers at Rutgers University have found conclusive evidence that you shouldn't text in the dark. Don't worry; your BFF will live to see another day if she doesn't get that last message about your hypothetical Shrek-themed funeral planning. Bottom line? When you hit the sack tonight, you're going to want to put your smartphone on silent (easier said than done!). Here's why.

In a study published in the Journal of Child Neurology, Rutgers' researchers found that American teens who turned off their cell phones less than 30 minutes after lights out performed far better at school than those who burned the midnight oil texting after lights out. It's the first study of its kind to actually link nighttime texting habits with academic performance and, ultimately, sleep health. "We need to be aware that teenagers are using electronic devices excessively and have a unique physiology. They tend to go to sleep late and get up late. When we go against that natural rhythm, students become less efficient," explains Xue Ming, study author and professor of neuroscience and neurology at Rutgers New Jersey Medical School.

But, you may be wondering, what does this have to do with me? For many of you reading this, your teen years (like mine) are long behind you. The relevance to you, my friend, is that the same principals apply to the rest of us. Ming's research may be the first of its kind to link nighttime texting to the sleep health of American teens, but it isn't the first to suggest a correlation between poor sleep patterns and the effect of electronics in general. Late last year, a study out of Brigham and Women's Hospital in Boston supported conclusions that screen time at night could be extremely disruptive to sleep and, subsequently, detrimental to our overall health. Ming's own experience backs these findings. "During the last few years, I have noticed an increased use of smartphones by my patients with sleep problems," says Ming. "I wanted to isolate how messaging alone — especially after the lights are out — contributes to sleep-related problems and academic performance."

While your days of academia may be over, your days in an office are most likely still aplenty. And just as nighttime texting can cause poor performance for a teen in high school, it can similarly wreak havoc on your performance at work. Because the blue light emitted by smartphones and other electronic devices can delay melatonin release, they make it more difficult to fall asleep and stay asleep. This can lead to your Circadian rhythm can get all out of whack, at which point you basically stagger through the following day like one of the fashionably undead from "Thriller."

To put a stop to this potentially bad behavior, here are a few ideas for winding down at night which don't involve the harsh glow of a blue screen:

Curling up with a good book gives your brain a chance to shut off all of the thoughts flying around and simply focus on another world. Not only is this a relaxing activity, but it may also be one that puts you on the path to success. Many of the world's greatest minds — think Bill Gates or AOL's CEO Tim Armstrong — cop to reading at bedtime.

What in the world is that, you say? In short, it's a simple way to prepare your body for sleep, according to Catherine Darley, ND, director of the Institute of Naturopathic Sleep Medicine in Seattle. Give it a shot tonight by curling your toes tightly for a count of seven, relaxing, and then repeating through each muscle group all the way to your neck. After which, nighty-night!

There's an abundance of evidence supporting the theory that meditation alleviates insomnia. The science behind it? Meditation decreases your wired brain's excessive beta brainwaves and increases the far more beneficial alpha, theta, and delta brainwaves — also known as "sleep brainwaves" — so you can nama-stay asleep.

More like this
15 Years Of The iPhone, In Pictures
By Emma Carey
How To Decide Between Using White, Pink, & Brown Noise
By Carolyn Steber
How to Delete (or Pause) Your Hinge Account
By Emma Carey
How To Protect Your Digital Privacy If You Need An Abortion Post-Roe
By Kaitlyn Wylde
Get Even More From Bustle — Sign Up For The Newsletter