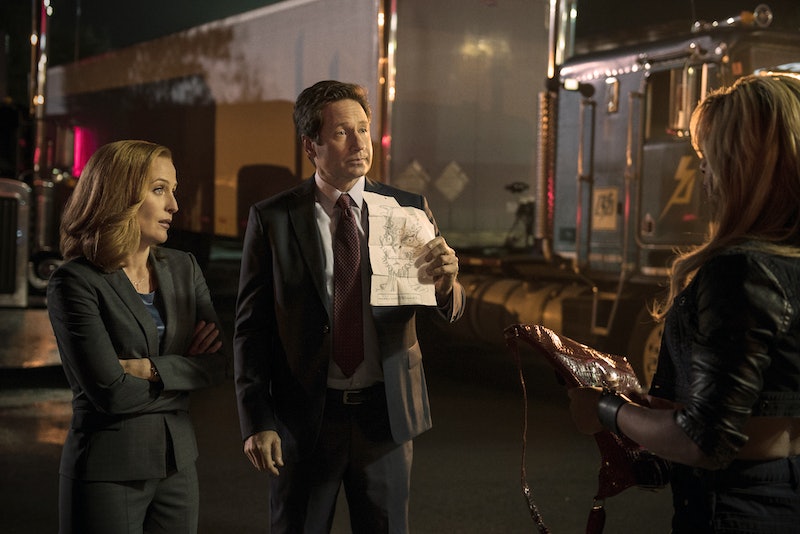 There are no words to express how much I've missed the "monster of the week" standalone episodes, so I quite literally jumped for joy when Scully told Mulder realized that their newest case involved a monster on the Feb. 1 X-Files episode "Mulder and Scully Meet the Were-monster." When the episode begins, Mulder is busy moping and throwing pencils at Scully's "I Want To Believe" poster and she's way more enthused about pursuing the aforementioned monster than her partner. The pair is having a seriously disconcerting Freaky Friday moment and I'm against it. Luckily, the were-monster turns out to be the best thing that's happened to Mulder in a long time — and he's a godsend for fans as well, because this is arguably the revival's strongest episode yet.

Mulder and Scully spend the episode chasing a "man-sized lizard with human teeth" and one glimpse of it turns Mulder back to his old self again. Except, now that it's 2016, he has a handy camera app and the Internet at his fingertips. He engages in a good, old-fashioned rant about this monster (who's "not just your everyday, run of-the-mill monster") and refutes Scully's points before she can even make them. He's enthused and brimming with theories and X-Files fans everywhere rejoiced — because, like Scully, this is how we like our Mulder.

The monster, whose name is Guy, turns out to be completely harmless and he's just as confused about his shapeshifting ways as the agents. Rhys Darby gives a hilarious performance and shares a bonding moment with Mulder, because they have way more in common than you'd expect. As Guy tells Mulder in the episode's final scene, he's gone through a rough patch and he's glad to have met the agent. Mulder feels the same way — he even utters the words "I want to believe" and it's music to my ears.

Since so many of its overarching themes and plotlines are decidedly dark, it's easy to forget that The X-Files can be a hilarious show. In honor of the revival's strongest episode yet, let's re-live the funniest moments of "Mulder and Scully Meet the Were-monster."

1. Mulder Attempting To Use His New Camera App

Mulder is now the owner of a smartphone and he installed a new camera app — the trouble is, he's just "not sure if it's working right." He's super proud of himself when he gets a video of the monster, but when he shows it to Scully it turns out to simply be footage of Mulder screaming. "You've got the lens pointing the wrong way," she helpfully points out. His answer? "It's a new app!"

2. "Mulder, The Internet Is Not Good For You"

Mulder also uses his smartphone to Google scientific facts to back up his ideas — and I'm gonna have to agree with Scully on this point, because Mulder and the Internet are a bad (but hilarious) combination.

3. The Fact That Scully's Having So Much Fun

Knowing The X-Files, it'll be short-lived — but it's nice to see Scully happy and joking around again. Plus, this scene is a reminder that the FBI unit is as important to Scully as it is to Mulder, and she seems far more inspired by the work than she did in her brief scenes at the hospital in "My Struggle."

4. Guy's Response To His Alarm Clock

Guy really does not enjoy being a human being — and he's especially chagrined by his alarm clock. He gets slightly violent with it and asserts: "You're not waking me up again tomorrow, do you understand?" The were-monster is all of us in this scene, because he knows the struggle is real.

Scully prefers Mulder when he's "batcrap crazy" and words can't express how happy I am to see him acting like his old self.

"You know it's not safe to approach a dangerous suspect without backup," Mulder reminds Scully before asking her which way the were-monster went and then running off to do the exact same thing. Despite their trusty smartphones, these two spend most of the episode unable to locate each other and I'm gonna have to say that's mainly Mulder's fault.

Because he still wants to believe, obvi.

As Guy points out to Mulder, he quickly realized that the only way to be happy as a human is to spend all your time in the company of non-humans. Later, Scully adopts a puppy who reminds her of Queequeg, the pomeranian she owned before he was eaten by an alligator (because the level of Scully's bad luck in this series truly knows no bounds). She tells Mulder that she recently read a study showing that dogs hold grudges against people who hurt their owners. "I miss having a dog to love and someone to hold my grudges for me," she explains. Awww. Fingers crossed that Scully's new dog fares better than poor Queequeg.

Welcome back, Mulder. You've been deeply missed, and we owe a debt of gratitude to Guy for helping Mulder snap out of his skeptical phase.