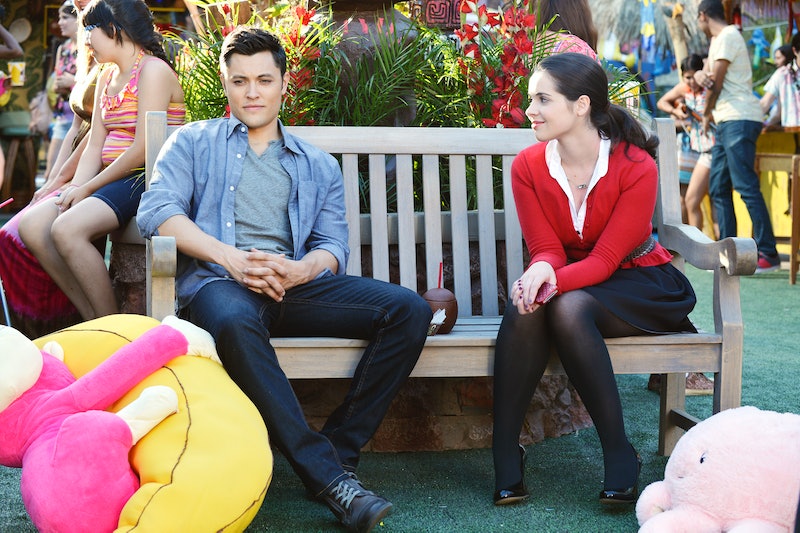 Sleepy Hollow, that show about supernatural ‘shipping, ended its freshman run last week. In addition to just being bummed that it was over, I also found myself lost and confused — what would I recap next? A quick Gchat with my editor this morning offered two options: Teen Wolf and Switched at Birth.

Five minutes in and it’s shockingly apparent to me that I am not the guy to be recapping Switched at Birth. The same could probably be said of me and Teen Wolf… or any ABC Family/CW-type show, for that matter. But it’s SaB that I picked and SaB I am tasked with writing about. Life is a series of decisions you have to just own and contend with.

Now there’s an inherent challenge trying to understand what’s going on on a show for which you’ve seen zero previous episodes, so I’ll cut myself some slack there. Notes of mine like “how many deaf kids GO to this school?” aren’t insensitive, then, but genuinely curious. I’m just trying to figure this shit out! It’s like dropping into an improv class four weeks in, after everyone’s already defined their “role” in the group, and trying to understand just what you’re getting into. You can’t win.

But, one hour more versed in the world of Switched at Birth, I’ve learned a few things that I didn’t know before. Practical things. Silly things. But things I’d like to share with you now, if it’s alright with you.

1. Turns out there are still some funny deaf jokes!

Please understand I don’t mean making fun of deaf kids jokes, as I am neither a monster nor a pre-teen boy (nor both). No, what I mean are jokes focused on what it’s like to be deaf, and to go to school somewhere that’s got, like, 12 deaf kids. I was taken aback by the completely signed opening scene, which lead me to believe this was a Very Special Episode. Turns out it wasn’t, and deafness is just a natural part of this world (as it is, you know, the real world). So it took some getting used to.

But then you get used to it, and can mirthfully enjoy a principal calling out a student who is very clearly beginning to sign something like “go screw yourself” with her hands. “Don’t you even think about finishing that sentence!” Classic.

Just like P. Diddy, D.W. Moffett has a mean face. It’s not his fault! Some people are born that way, and with no reflection on their soul or value as people. But you remember the guy playing J.D. McCoy’s abusive dad on Friday Night Lights… and you just shudder. Anyway he’s BACK on SaB as a former baseball player trying to connect with his biological daughter, and doing so as meanly as possible. Somehow it’s worse with sign language thrown in the mix? A D.W. Moffett death glare is one thing; a Moffett death-sign just amps up the terror. Bottom line: I am glad he’s not my fictional dad.

3. You’ll never have a winning lacrosse season with your brother as the coach

Granted, it remains to be seen just how the rest of this season plays out. This unnamed squad from this unnamed school could very easily go on to take regionals, and then state, in a stunning display of athletic prowess. But judging on the quality of their practice field (what looks like the local park) and the experience of their coach (the star player’s older brother, who just graduated and got married, among other stuff going on in his life) I don’t see victory in the cards. Sorry girls!

To say that I learned more from this episode of Switched at Birth would probably be a stretch, so let's quit while we're ahead. Maybe we'll be back with more heartfelt lessons next week? Don't wait up, but do check in.

More like this
'Heartstopper’s Joe Locke Wants To Be Disney’s First Gay Prince
By Sam Ramsden
Selena Gomez Is “So Excited” To Host ‘SNL’ For The First Time — What To Know
By Stephanie Topacio Long
What’s New On Netflix: A Victoria Justice Rom-Com & The Return Of David Letterman
By Arya Roshanian
Selena Gomez’s ‘SNL’ Hosting Debut Had Twitter Gushing Over ‘Barney’ & Wigs
By Stephanie Topacio Long
Get Even More From Bustle — Sign Up For The Newsletter