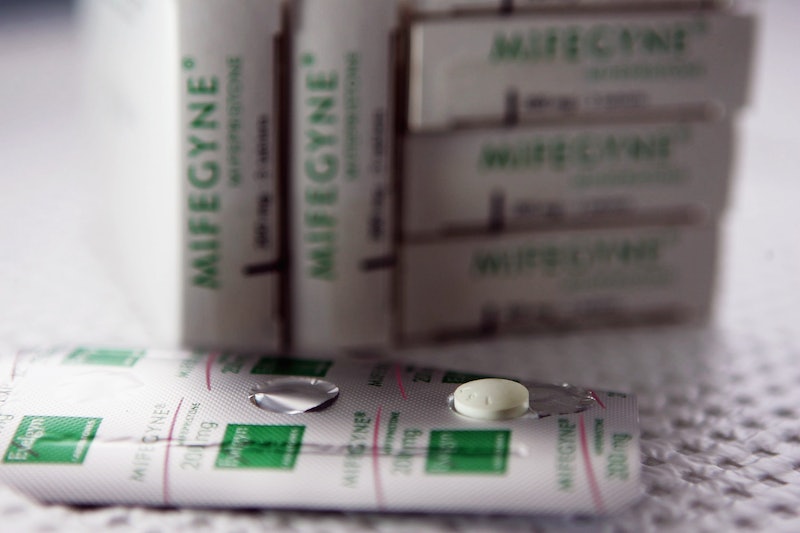 Earlier this week, women living in several Latin American countries were advised against becoming pregnant for at least two years following an outbreak of the Zika virus, a disease transmitted through mosquito bites. Although Zika itself is a mild disease that doesn't typically require hospitalization, reports from the recent outbreak in Brazil and its neighboring nations have led health officials to believe that the virus may cause birth defects in infants, according to the Centers for Disease Control and Prevention. In an effort to curtail a health crisis, the governments of Brazil, Colombia, and El Salvador urged women to put pregnancy on hold as a precaution. Yet these countries also criminalize abortion and limit access to birth control, leaving women with very few options about how to avoid pregnancy and what to do when facing an unintended pregnancy.

That's where Women on Web is stepping in. In a statement issued Saturday, the Dutch reproductive health organization announced it will begin providing free medical abortions (i.e. pill-induced abortions) to pregnant Latin American women infected with the Zika virus.

"Women can do the online consultation and when they send the laboratory result indication the Zika infection, packages containing medical abortion pills will be sent for free," the organization said in a statement.

The organization explained in the statement:

Reproductive rights activists in Brazil are petitioning the government to loosen the country's current abortion laws, which outlaw the procedure in all cases except rape, medical emergency, or a severe fetal abnormality. While health officials believe the Zika virus is responsible for the birth defect microcephaly, which causes infants to have abnormally small brains, the disease has not yet been approved by the Brazilian government as a reason for women to have a legal abortion.

Women living in the Zika-affected countries of Colombia, El Salvador, Bolivia, Chile, Guadeloupe, Paraguay, Venezuela, Argentina, Surinam, Guatemala, Honduras, Panama, Haiti, and the Dominican Republic will be able to receive free shipments of the abortion pill. The shipment will take between one and five weeks, and so Women on Web is urging pregnant women infected with Zika to contact the organization as soon as they receive their diagnosis. The abortion pill is only effective up until the ninth week of pregnancy.

Women on Web, formerly known as Women on Waves, has been aiding pregnant women seeking safe abortions in otherwise hostile climates since 1999. The organization provides pregnant women with medical consultations via the Internet, and then sends them the abortion pill, ensuring that their at-home abortion will be safe and effective (oftentimes, women who purchase the abortion pill over the Internet receive counterfeit and potentially harmful pills). Last summer, Women on Web also piloted a new drone program, providing women in Poland, where abortion is illegal in most cases, with the abortion pill by flying drones over the border from Germany, where abortion is legal.

More like this
For These Abortion Clinic Volunteers, Going TikTok Viral Is A Risk Worth Taking
By Audra Heinrichs
How To Fight For Reproductive Rights, Based On How Much Time You Have
By Courtney Young
The Most Powerful Photos From The Weekend’s Abortion Rights Protests
By Melanie Mignucci
Why You're Seeing Green Bandanas At Abortion Rights Protests
By Lexi Inks
Get Even More From Bustle — Sign Up For The Newsletter