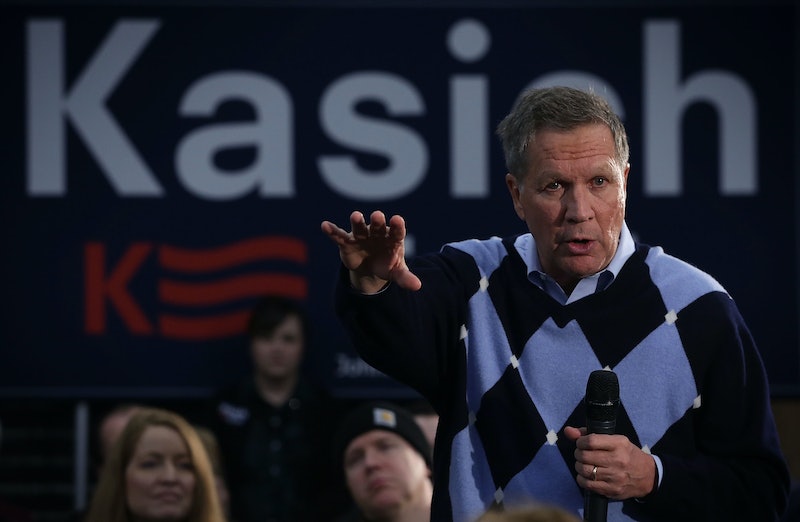 In a surprise announcement, The New York Times has endorsed John Kasich for the 2016 Republican primary nomination, calling the Ohio governor the "only plausible choice" for the Republican party. While acknowledging that Kasich is "no moderate," The Times editorial board claimed that he's the Republican party's most likely candidate to both win over mainstream Republican voters and lead the party away from its growing extremism on issues such as immigration, religion, and foreign policy. The newspaper bypassed current Republican front-runner Donald Trump and Tea Party favorite Sen. Ted Cruz (R-Texas) to endorse Kasich, a dark horse candidate whose campaign promises economic prosperity, job creation, and, unlike most Republicans, a safety net for low-income Americans.

"[A]s a veteran of partisan fights and bipartisan deals during nearly two decades in the House, [Kasich] has been capable of compromise and believes in the ability of government to improve lives," The Times editorial board wrote in an editorial published Saturday. "He favors a path to citizenship for undocumented immigrants, and he speaks of government’s duty to protect the poor, the mentally ill and others 'in the shadows.'"

The editorial board also applauded Kasich for his commitment to affordable health care for low-income citizens. While his GOP colleagues in Congress continue to rail against President Obama's Affordable Care Act, The Times noted that Kasich "did an end-run around Ohio’s Republican Legislature to secure a $13 billion Medicaid expansion to cover more people in his state."

Of course, it's not like Kasich also doesn't pander to the more religious social conservatives. The Ohio governor is not only staunchly against abortion rights, but also affordable reproductive health care for women and men. His campaign plank boasts:

When John Kasich became governor, the Ohio Department of Health stopped awarding new state dollars to Planned Parenthood. Also, Kasich signed legislation kicking it to the back of the line for the federal government’s family planning grants the Health Department administers.

Kasich is also an opponent of same-sex marriage. However, following the June 2015 Supreme Court decision Obergefell v. Hodges, which legalized same-sex marriage in every U.S. state, Kasich said the ruling was now the "law of the land" and promised to uphold it. Unlike his social conservative contenders, Kasich does not focus on overturning the decision and outlawing same-sex marriage.

Kasich's endorsement from The New York Times is surprising due to his dark-horse status — Kasich is polling at just 2 percent in Iowa, according to Public Policy Polling. Yet the endorsement is not so shocking when you consider the GOP's leading candidates are still Trump, Cruz, and fellow Tea Party favorite Sen. Marco Rubio. Trump is currently polling at 31 percent in Iowa, with Cruz coming in at 23 percent.

While Trump has made the string of presidential debates entertaining, the GOP political circus is becoming less and less humorous as November looms nearer and a Trump presidency is on the horizon.

"Mr. Trump invents his positions as he goes along," the editorial board wrote. "His supporters say they don’t care. What they may not know is how deliberately he is currying their favor."