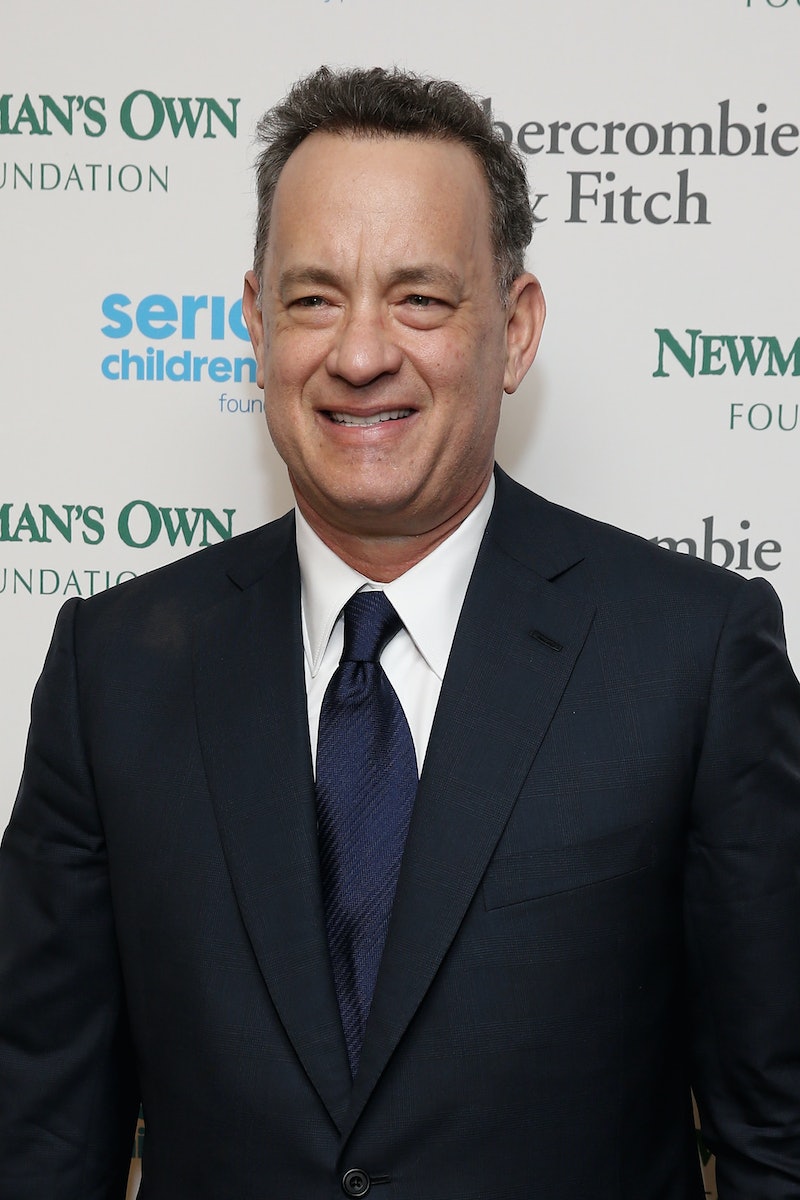 Americans have spoken: According to a new nationwide poll, it seems the actor most Americans love the most is Tom Hanks. This should not come as a surprise to anyone, of course, since Hanks won this exact same honor in 2002, 2004, 2005 and 2013 — but hey, it's exciting to know Mr. Hanks has still got it.

This most prestigious of awards comes from The Harris Poll, who surveyed 2,252 American adults about their favorite film actor. According to PEOPLE, Johnny Depp was runner-up, and Denzel Washington (who had no major releases this year) fell from the number one spot to third place this year. John Wayne and Harrison Ford rounded out the top five. (Also, Meryl Streep fell out of the top 10 this year, which makes me questions the validity of this survey, but I digress).

In 2015, Hanks starred in Bridge of Spies and Carly Rae Jepson's "I Really Like You" music video. But his success last year is only a sliver of his absolutely amazing and long-running career. And as The Harris Poll has confirmed — he truly is America's favorite actor.

In celebration of Tom Hanks reign as America's beloved actor, here are the best quotes from Tom Hanks filmography:

"My momma always said, "Life was like a box of chocolates. You never know what you're gonna get." — Forrest Gump, Forrest Gump

An oldie but a goodie. This quote will arguably remain as Hanks' most famous movie quote forever.

"These are the simple rules. No barking, no growling, you will not lift your leg to anything in this house. This is not your room." — Det. Scott Turner, Turner & Hooch

Don't worry Tom Hanks. I also have extremely detailed conversations with my dog, too.

"All my life I've been waiting for someone, and when I find her, she's... she's a fish." — Allen Bauer, Splash

Is this movie where the phrase "catfish" came from?

Stream A League of Their Own here.

What I say every time I see my credit card bill.

"I know what I have to do now. I gotta keep breathing. Because tomorrow the sun will rise. Who knows what the tide could bring?" — Chuck Noland, Cast Away

Tom Hanks is the only man I will watch be stranded on a island with a beach ball as his only companion for two hours.

"I guess sometimes the past just catches up with you, whether you want it to or not." — Paul Edgecomb, The Green Mile

This quote is equally poignant and haunting.

"Adorable. Dammit, why can't you look terrible? I've been out walking the streets trying to convince myself I wasn't in love with you, and I come back here and you're barefoot and you're adorable." — David Bradley, Every Time We Say Goodbye

It's like Hanks isn't a real person. Why is he so adorable? I just cannot deal.

"It was a million tiny little things that — when you added them all up — they meant we were supposed to be together, and I knew it. I knew it the very first time I touched her. It was like coming home, only to no home I'd ever known. I was just taking her hand to help her out of a car, and I knew. It was like magic." — Sam Baldwin, Sleepless in SeatTle

And this is why I am in love with Tom Hanks.

This might be the greatest passive-aggressive version of eff you I've ever seen on screen. Well done Tom Hanks.

Hanks will forever be the greatest cowboy in cinematic history.

There you have it, just some of Tom Hanks's greatest film quotes because let's be honest — Hanks is the best, and there are too many amazing films to pick from. You go, Tom Hanks.