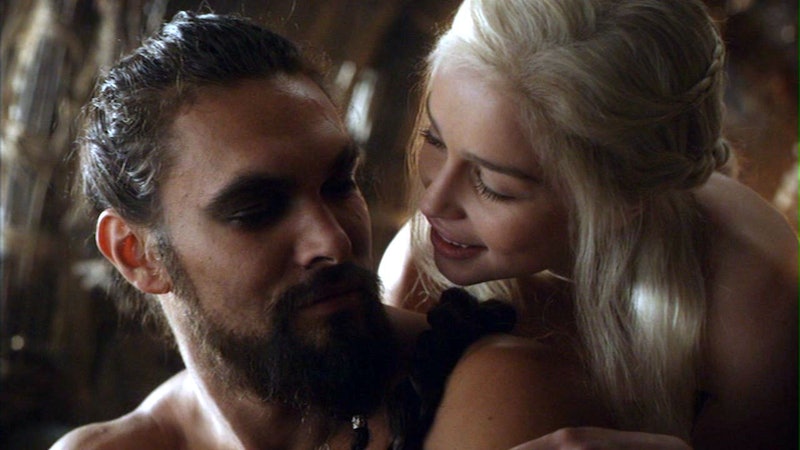 Spoiler alert: in the first season of Game of Thrones, Khal Drogo dies. The reason Khal Drogo has to die is that he and Daenerys have too functional and cute of a relationship, which is the kind of thing that Game of Thrones really tries to shut down in order to espouse its message that, in real life, happiness and love are fleeting distractions before you're impaled by your brother-in-law or whatever.

For those who might not remember Drogo from all those impalings ago, he was the Dothraki warlord whom Daenerys marries at the bidding of her similarly short-lived evil brother Viserys. Their marriage starts off pretty rocky, since Khal Drogo is mostly into raping and pillaging and Dany is not about that life. However, they eventually build a relationship around mutual respect and understanding. It was as sweet as any of the relationships on Game of Thrones, which is why it had to end.

Here's how Drogo's death went down: Once Dany earns the respect of her husband and the Dothraki, she becomes pregnant. Drogo sustains a wound that festers and leaves him slowly dying. Dany bargains with a witch to save him, who, unbeknownst to Dany, takes the life from her unborn child for Drogo, and leaves Drogo in a vegetative state. Dany smothers Drogo to prevent him from living a shameful half-life, and in the process, loses both her child and her husband.

While much of Dany's subsequent power comes from these tragedies, I kind of wish she and Drogo had continued as a GoT power couple — you have to admit, a lot would be different. Here's what GoT would be like if Khal Drogo had survived:

Dany Might Not Have Become The Mother Of Dragons

The inciting incident for the birth of Khaleesi's dragons was the funeral pyre for Drogo. While the eggs were hers and the dragons are the Targaryen legacy, it seemed that this low created the opportunity for their birth. She might not have needed their power if she had continued as Drogo's wife.

If Drogo had not been wounded, the Khaleesi would not have had to bargain with the vengeful Mirri Maz Duur to save her husband's life. The son, who was prophesized as a great man, would have been the Targaryen heir to the Iron Throne. While this would have saved Dany from a horrible loss, it also would have meant that he — not she — would have been vying for the throne.

Daenarys Might Not Have Needed To Build Her Troops

While some of the Dothraki stayed with their Khaleesi when Drogo died, many also abandoned her, leaving her in want of an army. Many of the events of the seasons involved her building her forces with freed slaves, a kind gesture that might not have been necessary if she'd had the full force of the Dothraki behind her.

Like quite a few of the men Daenerys meets, Daario Naharis is in love with her. I do not imagine that Drogo would have been cool with their flirtatious and eventually sexual relationship, which seems to been the main reason for Daario's loyalty to her.

While her motivations are occasionally dubious, many of Dany's gestures are built on her moral commitments to human life and freedom. While Drogo and Dany had a briefly cute relationship, I don't imagine him being as anti-slavery as she was. This would have been, at the very least, a source of marital strife.

I think that even one happy couple that lasted for more than a season might have changed the tone of the series to something a little more sentimental. On the other hand, I wonder if Drogo and Dany's love would have been able to survive their seemingly different opinions of raw meat and murder.

Would Dany's fate have been better if the love of her life had remained alive? I'm not so sure. From what I've seen, she only really needs three powerful allies — and unlike Drogo, they all breath fire.

More like this
The 'PLL: Original Sin' Creators Say A’s Identity Will Be “Very Clear” By The Season Finale
By Alyssa Lapid
'The Sandman’s Ending Is A Departure From Neil Gaiman’s Comic Book Series
By Kadin Burnett
A TikTok Conspiracy Theory Is Doing The Rounds About Stranger Things Season 1
By El Hunt
Gwendoline Christie’s Partner Is Part Of Royal Family History
By Parry Ernsberger and Sophie McEvoy
Get Even More From Bustle — Sign Up For The Newsletter