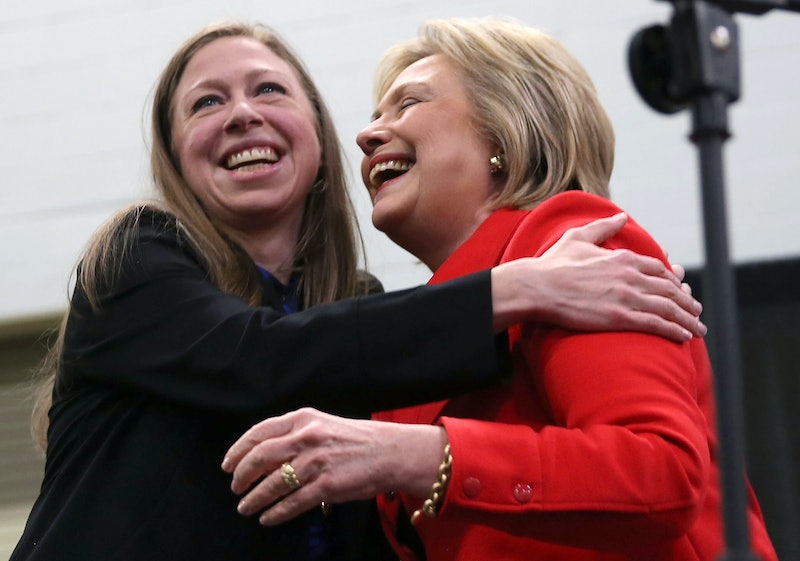 On Saturday, with the ever-important Iowa caucuses looming on the horizon, the Hillary Clinton campaign clearly decided to pull out, well, at least some of the stops: Chelsea Clinton took over Hillary's Instagram account, in what's just one more reminder of her mounting involvement in her mom's presidential run. You can see for yourself!

So far, the Chelsea Instagram cameo has consisted of four photos ― one announcing the takeover that shows her embracing Hillary (you're probably doing alright when you're pulling down 18,000+ likes), one showing Chelsea stopping by the DJ booth at the I'll Make Me A World In Iowa festival (she's apparently not so confident in her own DJing abilities), one showing her getting ready to take the stage to do a little campaigning, and one showing her posing with a young girl who attended the event.

All in all, it's a pretty modest foray into the world of political campaign Instagramming, but you can't necessarily fault that ― with the first voting day of the 2016 race just days away, it's hardly the time to be taking big, bold risks. After all, it's sometimes perilously easy to flub a social media campaign, as the Clinton camp should know by now. But it's entirely possible that you'll see more from Chelsea as the weekend moves along.

It's not as though Chelsea's increasingly prominent position in the Clinton campaign has been all smooth sailing so far, however. While something like an Instagram takeover is simple and fun enough, she did stir up some major controversy and criticism for her characterization of Bernie Sanders' views on health care.

Specifically, speaking at an event in New Hampshire earlier this month, she claimed that Sanders "wants to dismantle Obamacare, dismantle the CHIP program, dismantle Medicare, and dismantle private insurance." In reality, only that last part would be accurate ― Sanders is explicitly in favor of a single-payer health care program. Medicare for all, as he describes it.

But it's probably not so surprising that a close relative of any candidate might say something wrong, impolitic or exaggerated in their defense. Nor is it surprising that right now, with the caucuses meeting just in less than 48 hours, it's no time for trip-ups, slip-ups or indecision. It's not as though Chelsea's the only person still getting acclimated to the full 2016 campaign experience, either ― it took a while for Bill to up his involvement, too, but he's been hitting the trail in Iowa in recent days.