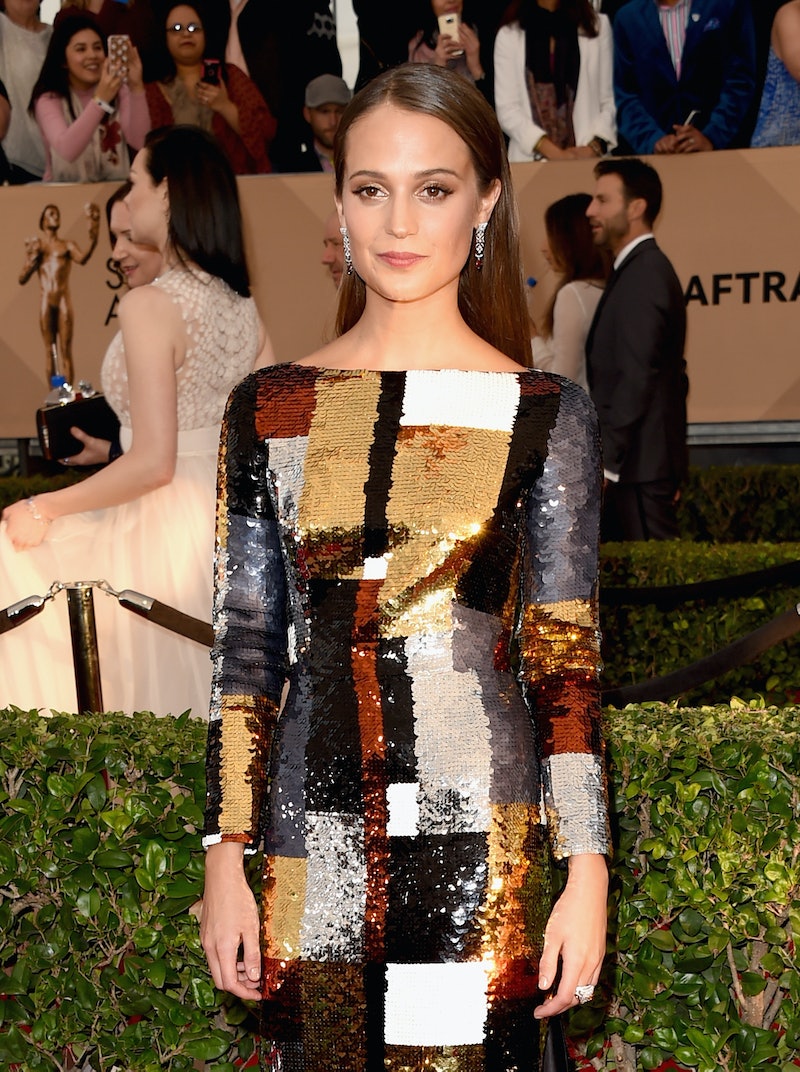 Not only is she a Screen Actors Guild Award winner, but she's on the best dressed list as well. Alicia Vikander wore Louis Vuitton to the SAG Awards and it's not the first time she's stepped out wearing the designer. She looked fabulous in the all sequined gown, which was a complete standout for more than one reason.

As soon as she hit the Screen Actors Guild Awards red carpet, she was shining bright. Vikander's sparkling gown was a true stand-out. With a combination of white, black, gold, and brown colorblocked squares, the Louis Vuitton dress was more like a work of art. The form-fitting gown was covered in a geometric pattern from head to toe.

The sparkly gown looked fabulous under the bright stage lights as she walked up to accept the award for Outstanding Performance by a Female Actor in a Supporting Role for The Danish Girl. If there's anyone who can rock a long-sleeved, thigh-high slitted gown, it's definitely Vikander. This isn't the first time that she's rocked the designer, either. Not only did she wear Louis Vuitton to the 2015 Golden Globes, but she starred in the Louis Vuitton ad campaign earlier this year as well.

Just look at how fabulous she looks in her SAG Awards gown.

Come on! It doesn't get better than this print.

Then she turns to the side and there's a surprise slit that you never saw coming from the front.

Vikander's slicked back hair was a great look to pair with a sleek gown.

She kept her makeup subtle, which left all eyes on the gown, and the earrings were the perfect finishing touch.

It doesn't get much more gorgeous than this!

More like this
10 Show-Stopping Manicures From The 2022 BET Awards
By Paris Giles
Hailey Bieber's "Glazed Donut" Nails Are So Minimalist Chic
By Danielle Sinay
35 Ideas For 4th Of July Nails That Go Beyond Red, White, & Blue
By Audrey Noble
Rihanna’s Makeup Artist Isamaya Ffrench Is Launching Her Own Makeup Line
By Tomi Otekunrin
Get Even More From Bustle — Sign Up For The Newsletter