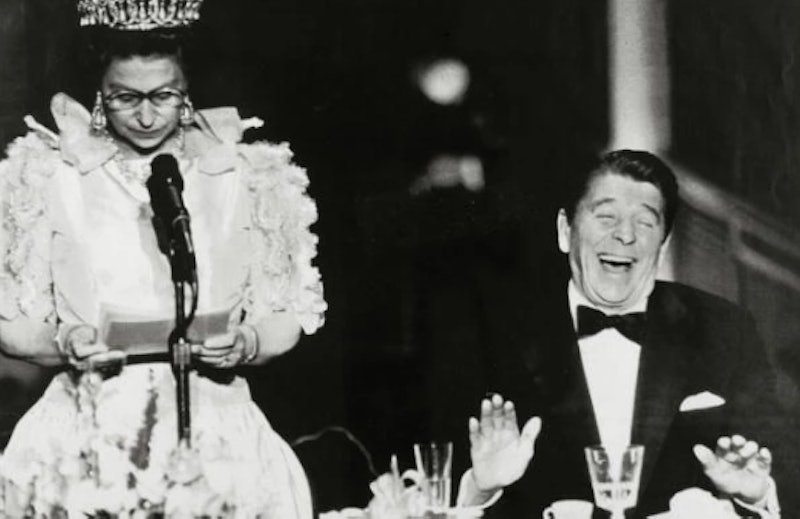 To be electable, political candidates have to kiss babies, eat a lot of pulled pork sandwiches, and relate at least to some degree with their fellow man. Occasionally, though, presidents take the realness too far. They are, after all, supposed to be presidential. In these photos, taken throughout history, the presidents look a little bit like your dad hanging trying to hang out with your roommates from college — and it isn't pretty. Presidents shouldn't try to be cool.

Given the decades — or even more than a century — of difference between some of these former commanders-in-chief (they stretch from Theodore Roosevelt to Barack Obama), their similar penchants for the awkward smile, creepy gesture, or totally inappropriate behavior is surprising. Rather than retire to the halls of the West Wing and work like madmen, they continue to put themselves out there for public scrutiny with activities as potentially embarrassing as golf and visiting treasured national monuments.

So let this be a warning to the 2016 presidential candidates: Don't do these things when a camera may be nearby: bending over, riding anything, or making hand gestures. If you have young children — or better yet, teenagers — then consult them for further instructions, as the goal post for cool changes constantly. If you embarrass them now, then when the photo surfaces in 20 years, America will be embarrassed for you all over again.

This man was no Paul Ryan or Martin O'Malley. But he was both a president and Chief Justice of the Supreme Court (obviously, not at the same time). He's the only person to have ever held those two positions.

Winner of the Nobel Peace Prize, and evidently also an avid golfer. Since this was taken in 1916, between strokes, Wilson would have been working hard to keep the United States out of World War I. He also was up for reelection that year.

The originator of the fist bump? Harding, photographed here in 1922, was only in office for two years before he died. He didn't waste anytime gaining popularity with photos like this one, but after his death, news of scandals broke — everything from affairs to oil rights — that show he was ahead of his time in more ways than one.

Totally not okay. Photographed on his way to the West in 1933 — four years after he served as president — Coolidge was very un-PC.

All the cool kids were probably doing it. Back before the anti-smoking campaigns, Hoover poured from a jug in the forest and smoked a cigar in 1935. Good thing prohibition had ended in 1933 (albeit under his successor).

Deuces! Well, he probably meant "peace," but still ... the gesture doesn't seem quite right for the president credited with ending the Great Depression and leading U.S. efforts in World War II. Photographed here in 1939, FDR was at his Hyde Park, New York estate.

He won four terms, so he gets two photos. FDR was riding in his car with his dog, a Scottish terrier named Mr. Falla, shown here in 1941.

Perhaps this one is more uncomfortable for the media than for Truman (who actually won the election, despite the headline).

I don't think Theodore Roosevelt had this in mind when he said, "Speak softly, and carry a big stick." Nonetheless, Eisenhower is photographed here with his golf club in the 1950s.

Sure, maybe it's just the angle, but this doesn't look good. JFK (and his brother Bobby on the left) are seen here at a party following the fundraiser where Marilyn Monroe famously sang "Happy Birthday, Mr. President."

Still JFK's vice president here in 1961 at the Governor's Conference, LBJ wore a very unfortunate shirt. I would even recommend Hawaiian before that.

No better way to announce your resignation than by giving the thumbs-up. This is actually from that announcement in 1974, following the Watergate scandal.

Taken while he was still vice president, Ford showed the paparazzi how it's done while on vacation with his wife Betty in Hawaii in 1973.

Here, Carter visits the Liberty Bell the day before the Pennsylvania primary. Imagine the outrage if Twitter had existed. It says "Don't touch!"

Not many people get to laugh at Queen Elizabeth's jokes, and Reagan couldn't control himself. The photo was taken in 1983, in San Francisco.

This is unfairly long after Bush Sr.'s time in office. But there's a good lesson here for everyone: Always apply your sunscreen before going outside. This photo is from an Astros game last year.

Somebody might need to tell former German Chancellor Helmut Kohl that we don't stand this close in the United States. This shot was grabbed after Clinton presented him with the Medal of Freedom in 1999.

A softy for war, overspending, and evidently Easter, Bush connected with the Easter Bunny in 2008.

During the 2012 election, Obama was picked up by a pizza shop owner in Fort Pierce, Florida. I'm sure the president was honored, but I hope he got a free slice or two out of the deal.

So, Hillary — I mean — 2016 winner, whoever you may be: Be careful, because America's watching, and has a slightly cruel sense of humor.