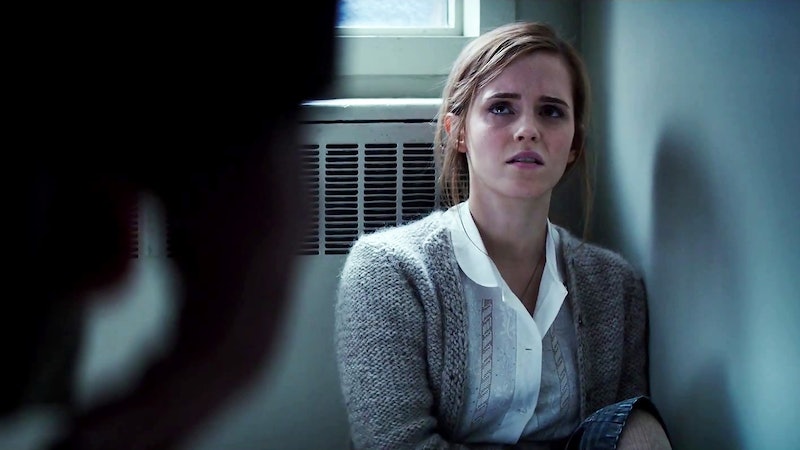 The psychological horror film Regression began filming on leading actor Emma Watson's 24th birthday. The star, who made a name for herself growing up on camera in the Harry Potter series, plays a 17-year-old sexual abuse victim in the film, opposite Ethan Hawke's haunted detective. (Aren't they all?) Watson tweeted that day that starting production was "a very cool birthday present." Unfortunately, it came a few years too late. Actors are regularly cast against their actual age — shout out to the cast of Grease Live! — but accepting adolescent roles is a dangerous strategy for a former child star. Emma Watson and her Harry Potter castmates must have keenly felt the pressure to show their range and maturity after graduating from Hogwarts. And Watson in particular has shown incredible poise and wisdom as a real-life activist and philanthropist. The themes of Regression are adult ones, but I'm disappointed to see Emma Watson regressing herself to play another teen role.

It's not that teen roles can't be challenging and draw out some incredible performances, of course, but Emma Watson has already played a range of fascinating teens. I loved her as the elegant and disillusioned Sam in the coming-of-age drama The Perks Of Being A Wallflower. She explored the morality-challenged excess of the adolescent 1% in Sofia Coppola's Bling Ring. And Hermione Granger is one of Young Adult literature's most influential teen characters, a book nerd with a deep well of inner bravery and a fierce concept of loyalty.

Angela Gray, Watson's character in Regression, enters the narrative as a victim. Her father confesses to sexually abusing his daughter throughout much of her life, though he can only remember the actual acts during regression therapy. A twisty, turn-y, paranoia-laden investigation spirals out from there, leading Hawke's Det. Bruce Kenner to a local branch of Satanists. In the interview below, Watson says the appeal of the character was in grounding Angela's "extreme and intense experiences" for the audience. "It took a certain amount of research and also just figuring out how I was going to make this girl feel real and relatable," Watson explains.

Regression comes out in US theaters on Feb. 5 (it was originally scheduled for an August 2015 release), and so far, reviews have been mixed; one Variety piece bemoaned Watson's "relatively undistinguished first dip into adult genre filmmaking." Since wrapping the blockbuster series, the actor's Harry Potter co-star Daniel Radcliffe has moved on to adult roles in comedies like What If and genre romps like Victor Frankenstein, while Rupert Grint went punk in CBGB's and is in production with Macbeth adaptation Enemy Of Man. Now 25, Watson has proven her own personal maturity off-screen, with her "He For She" campaign, which encourages men to self-identify as feminists, and by serving as a UN Women Goodwill Ambassador. But it's time that her on-screen identity, too, reflects her own personal growth. I can't wait to see her in a genuinely adult role some day soon.