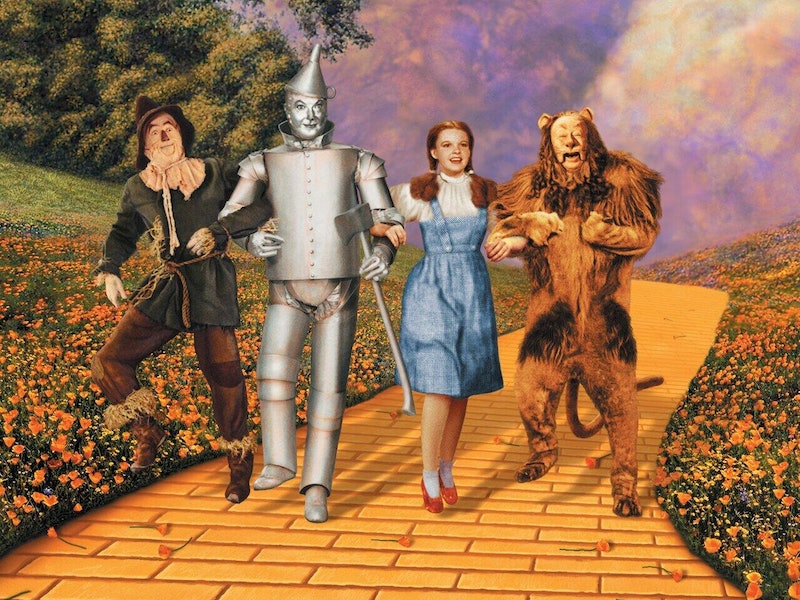 This year’s Oscars ceremony will not only be celebrating the (debatable) best of filmmaking in 2013, but also the 75th anniversary of The Wizard of Oz. Oscars producers Craig Zadan and Neil Meron said in a statement, "We are delighted to celebrate the birthday of one of the most beloved movies of all time at this year’s Oscars,” and so are we! Awards shows can be daunting and exhaustive at times, and we are swooning at the thought of a piece of the night dedicated to Dorothy, Toto and Co.

The Wizard of Oz continues to stand the test of time and woo new generations by its dazzling story and great big heart. It’s nearly impossible to not fall in love with this movie each and every time you watch it. And that is a great testament to the writing, artistry of its filmmaking, and the unforgettable performances of its stars. It’s part of our cultural lexicon and will most certainly stay there for a long, long time.

But The Wizard of Oz isn’t just a movie we watched when we were kids. It’s a film that remains relevant because it is a movie that remains utterly relatable.

At its core, it’s a story about feeling lost when your expectations do not meet reality— a perfect story for the millennial generation. The ill-fated, damned by the media, but altogether creative, innovative, and entrepreneurial generation, who despite the zeitgeisty headlines and demands to fit into convenient boxes, continues to follow the yellow brick road. Storms and witches and flying monkeys be damned. Sorry Girls, Dorothy gets it so right. It's a little something like this:

And you decide to go into “The Real World” which at first feels like this:

And then it feels like this! New apartment! City Life!

But then you remember you’re in the “Real World” now and you have a path to get back to.

So you follow your yellow brick road with your brains, heart, and courage and you just know you’ll land your dream job.

But then student loans start kicking in.

And you don’t have health insurance.

Things are looking pretty awful. But you keep going, wearily. Because you’ve just applied for coverage under the Affordable Care Act and go into loan forbearance. You’d rather be in more debt than be uninsured.

You finally land an interview for a job that will be the stepping stone for your dream career and life. Heck, you even LAND a full-time job.

But then you realize after a few months that you’re not doing what you thought you wanted. You still can’t afford to pay off all of that debt (and feel drowned in it). You’re still single (and love/hate it all at once). Your friends are all getting married and moving out to the suburbs. You feel like you missed a step somewhere along the yellow brick road. You feel lost and angry. You did “everything right” and still aren’t progressing, or so you think.

It’s okay, take a moment and look around you. Look at the adventure, albeit a messy one, that you’re on. Look at your wonderful friends. Appreciate that you’re trying to do this on your own and building a life for yourself even if it’s not the one you expected.

Because one day you’ll wake up and realize that you’re still you. You can’t plan every single brick on your path. And yours might be yellow, while your best friend’s is green, and your sister’s is orange. But you’re still you, and your path is yours and yours alone. Sometimes life feels like a storm, and it’ll throw you way, way off course. But, really, you’re okay. Just keep at it, and you should dream big so long as you keep your brain, heart, and courage about you. And it is totally okay to move back in with your parents for a little while.