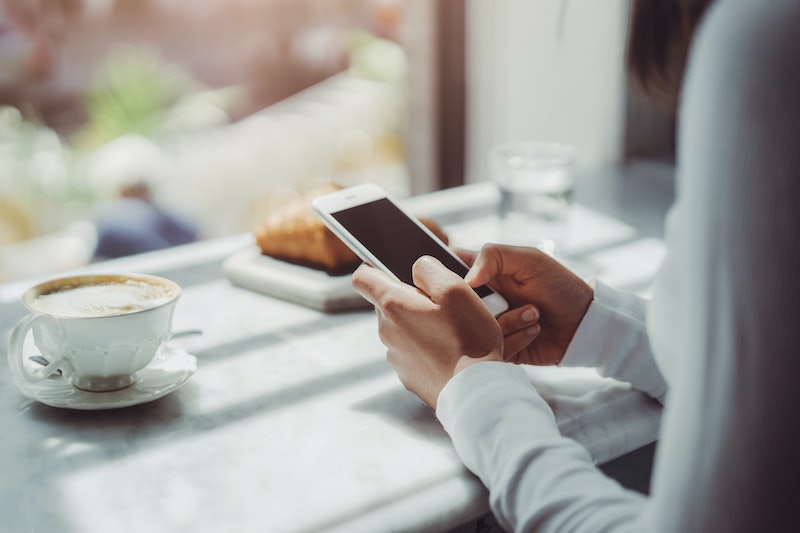 Developed by Pink Kiwi Co., Lovelines lets its users experience a romantic Choose Your Own Adventure story in real time via text message. You start by picking your poison: Jack, the family man; Marco, the PhD professor; Robby, the bank robber who also got away with your heart; or Brad, the business man (whom I suspect might function as a Christian Grey stand-in). Then, you commence a text conversation with this fictional fellow. Unlike texting with a real guy, you’ll never have to wait for your Romeo’s response; also unlike texting with a real guy, you won’t have to worry about getting emotionally invested in the story.

Sound familiar? Say, a bit like a little movie by Spike Jones called Her? Yeah, I thought so, too. Confession: I haven’t actually seen the film yet, but I’m fascinated by the premise. Will machines ever be able to replace human interaction?

Well…not if Lovelines is the machine in question.

In the name of research, I downloaded the free app and gave it a test run (what kind of blogger would I be if I didn’t?). Jack and Marco are the two characters that are immediately available; users can unlock Robby and Brad by spending a few “diamonds,” the in-app currency. You start off with 10; more are available for purchase, but I don’t spend real money on apps unless I absolutely have to, so I forwent the 10-for-99-cents deal in the app’s store and tapped on Marco. Here’s how it went:

Apparently Marco and I have recently finished up a meeting about my dissertation. “I thought that meeting went very well,” he texts me. “You presented your ideas concisely and authoritatively.”

Go me! I’m given two choices for my response; I opt for the modest one — academics don’t usually like smartasses. “Thanks for saying so, Professor Genovesi,” I text back.

“Call me Marco,” he tells me. Well then. He continues, “We’ll be working together quite closely for the next several months.”

I guess if the point of this whole thing is to have a virtual romance, maybe I should start getting a little flirty. I tell him: “I’m looking forward to it. Hope my company won’t burden you too much.”

The words “Marco is typing” come up on the screen. After a moment, this message appears: “A woman like you — so vital and full of blood and life and intelligence — it will be a pleasure. In more ways than one, I hope.”

Marco apparently has to run for a bit; the app helpfully informs me he’ll be back in a few hours. I use one of my diamonds to skip ahead (because apparently we can time travel now); later that “night,” my erstwhile professor texts me again. “I was thinking of your paper, Psychology of Desire,” he says. Of course that’s what I’m writing about. It wouldn’t be a romance story if it wasn’t, would it? “I wonder if we could spice it up a bit.” He goes on to tell me that he thinks I lack passion. “How can you write about desire when you seem so distant from the subject?”

Aha. I see where this is going. Ignoring the fact that no decent scientist would say something like that, I ask him, “What makes you think I’m not a passionate woman?”

“Behind all the intelligent writing, yes, it seems that the author has not struggled with desire herself. The paper is dry.”

Um, excuse me, Professor Hot Pants? “There’s nothing dry about me, Marco,” I text.

…You can probably imagine exactly what NC17-rated area the text exchanged ended up going from there. A few naughty, naughty texts later and Marco had to take off for the day; I opted not to spend three diamonds jumping forward to tomorrow, because there’s only so much cheesy sex writing I can take at any given time.

The verdict? Perhaps unsurprisingly, it’s not nearly as complex as Her is; it’s pretty much just an interactive version of a good ol’ fashioned bodice ripper. Personally, I don’t find the exchanges to be overwhelmingly sexy; that might just be because I’ve never actually known anyone who texts like that in real life, so there’s no illusion of reality or anything for me. I do, however, think it would make a hilarious drinking game. So come on, guys. Party at my house. You bring the tequila; I’ll supply the robot lover. Aaaaaaand… DRINK!