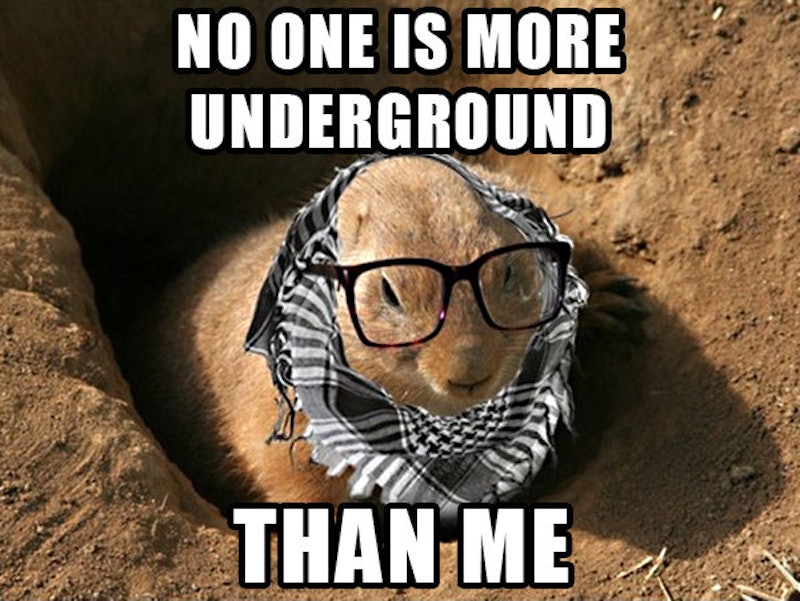 Today is Groundhog Day, and there's really no better way to celebrate than by perusing these ridiculous Groundhog Day memes. If you're anything like me, the entire concept of Groundhog Day seems slightly bizarre and totally hilarious to you. Let's face it — that chubby, fluffy, adorable little rodent has absolutely no idea what he's doing.

Groundhog Day is traditionally celebrated on Feb. 2 each year, as a sort of ceremonious prediction of the upcoming weather. Why February? Male groundhogs typically come out of hibernation briefly this month in order to find a mate, and then head back into the ground until March. As the legend holds, if a groundhog comes out of its hole and sees its shadow, there will be six more weeks of winter. But, if there's no shadow, we can all look forward to an early spring. (Apparently Phil didn't see his shadow today, by the way.)

The tradition began way back in 1887 in Punxsutawney, Pennsylvania, when a newspaper editor belonging to a group of groundhog hunters (yes, apparently that's a real thing) declared that Punxsutawney was home to the only weather-predicting groundhog — lovingly named Phil. Of course, there has been a long line of groundhogs named Punxsutawney Phils ever since, and other cities have even come up with endearing names for their own forecasting groundhogs — like Birmingham Bill and Staten Island Chuck.

Without a doubt, this whole tradition is pretty much rooted in ridiculousness. So, there's no better way to honor the day than with a few hilarious Groundhog Day memes that celebrate all of that bizarreness — and remind you how cute these chunky little rodents actually are.

Groundhogs are already unbearably adorable. A hipster groundhog? It's almost too much.

Me too, Michael Scott. Me too.

Phil may have predicted an early spring today. But, I mean, I think we'd all applaud this guy if he didn't.

This meme only says what we're all thinking.

Yes, Ryan Gosling, I do.

Let's face it — this little rodent has no idea what he's doing.