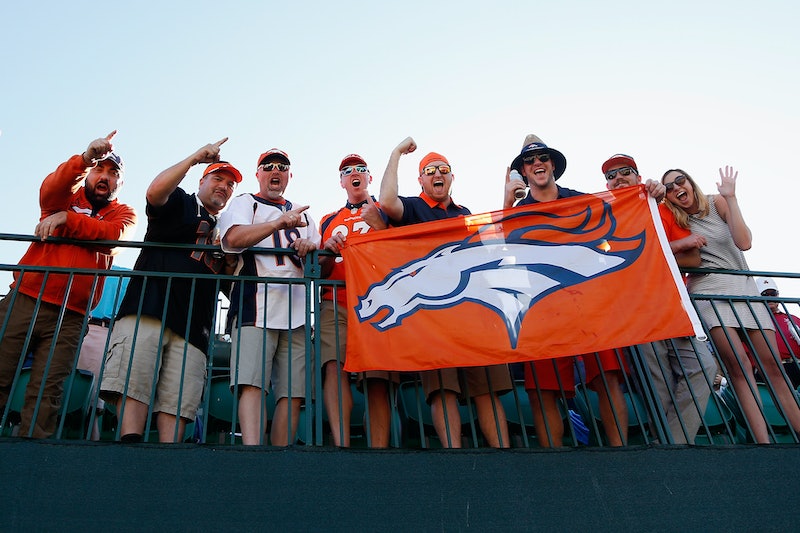 Hoping to clinch his second NFL championship on Sunday, Peyton Manning is leading the Denver Broncos to his fourth Super Bowl in his impressive (to put it mildly) 18 seasons in the league. Manning is a legend in the NFL. Not only has he been named league MVP a record five times, he has had the most career touchdown passes and holds the single season touchdown record. Yet despite his awe-inspiring career, Peyton Manning isn't the reason the Broncos are going to the Super Bowl.

This year was one of only two seasons in Manning's lengthy career in which he did not play in all 16 regular season games. In 2011, Manning's last year with the Indianapolis Colts, the quarterback had to sit out the season due to a neck injury that required spinal fusion surgery. This season, Manning helped the Broncos secure an 8-2 start, but was once again plagued with an injury. He suffered from plantar fasciitis, an inflammation of the ligament that eventually resulted in a tear in the tissue in his left foot, in Week 11.

Although Manning helped the Broncos get a solid foundation for their winning season, quarterback Brock Osweiler stepped up to help get the Broncos to the big game. Osweiler got the chance he needed to shine while Manning was out with his injury.

Osweiler proved himself to be not only a reliable player, but a creative and decisive one, as well. The 25-year-old Arizona State graduate joined the team at the same time Manning was picked up, so he hadn't gotten much experience on the field. But Osweiler really showed off his stuff while Manning was out. In one game against the Pittsburgh Steelers, he threw three touchdown passes and scored a rushing touchdown, all in the first half. Sure, that game Osweiler played so well in ended up being a tough loss for the Broncos, but he showed his potential.

The Broncos suffered two significant losses under Osweiler's leadership against the Steelers and the Oakland Raiders that can't be ignored. Luckily, the Denver Broncos defense helped keep the team on steady ground, even when Manning was off the field. The Broncos defense is currently ranked number one in the league, which commentators believe is the key to their success at Sunday's Super Bowl. "If the Broncos can get a few early sacks and force an interception or two by getting Cam Newton out of his comfort zone, the Broncos could steal the Super Bowl," said ESPN senior writer John Clayton. But while most analysts agree that the Carolina Panthers are the favored team to beat, any belief in a Broncos victory seems to rest in the defensive line.

It's no surprise the Broncos are having Manning start the Super Bowl. Of course, putting the more experienced player in the Super Bowl is the best strategy. However, Osweiler more than proved himself this season as a strong, creative quarterback with great potential. And next season might be his chance to become a star — Manning has hinted that Super Bowl 50 may be his "last rodeo". There's no official confirmation that the 39-year-old quarterback is planning to retire after the end of this season, but a Super Bowl win would be a nice cherry on top of a stellar career. Even if Manning isn't really responsible for getting the Broncos to the Super Bowl, he's sure to give 110 percent on Sunday night, fighting for what may be his last chance before the new kid takes over.