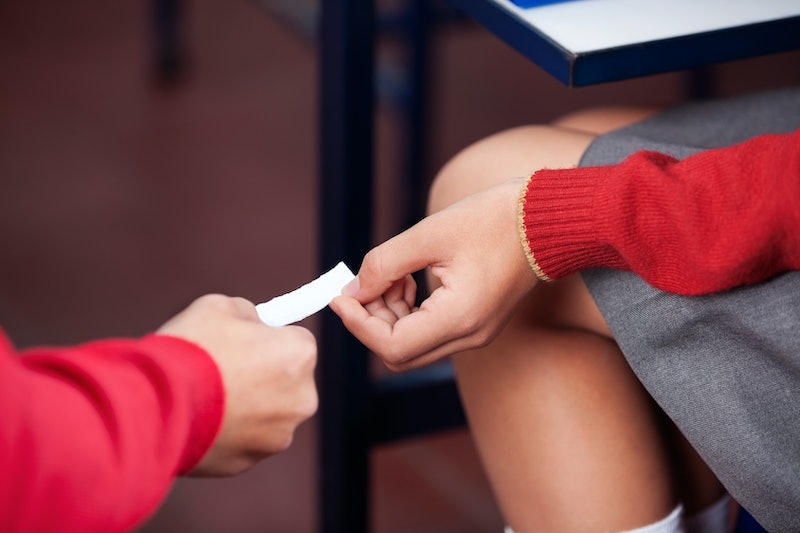 Back in my day, we had to walk a mile in three feet of snow just to — only kidding. Life in the '90s wasn't a total hardship. In fact, it was pretty darn great. But, much like the ol' tales of trudging through snow our parents are wont to tell about their school age years, life in the '90s could be considered primitive by modern kids for one major reason: we passed notes. We didn't text. Or Snapchat, or email, or any other technologically advanced message of communicating during class. In fact, the myriad kinds of paper notes passed in the '90s is testament to our fondness for this lost art (and, erm, also to our poor classroom etiquette).

The thing was, you didn't pass just any note (written in Gelly Roll, of course) in the '90s. The entire process was elevated to an art form.When our teachers backs were turned, we capitalized on the time to elaborately fold our notes into teeny tiny squares of origami gossip. Then there was the complicated matter of finding accomplices willing to aid and abet your detention-worthy endeavor. But if ever you established a solid system for note passing, your teacher was none the wiser... and, well, neither were you in the long run, I suppose. It sure was fun, though.

As they say, those were the good old days. In memory of all the minutes spent folding, passing, and accumulating paper cuts, join me in reminiscing about the types of notes you got in the '90s.

Nowadays kids stage masterful proposes just to ask someone one, but in the '90s, notes were the preferred method of scoring a prom date (or someone to make out with underneath the bleachers at home games). Nothing compared to the high that came from being handed a note you weren't expecting from your crush. It almost — almost — made that Arnold Schwarzenegger's "pump you up" P.E. workout bearable.

Girls of the '90s had things to do and people to see. How else were we going to coordinate our after-school and weekend extracurriculars with our BFFs if not via notes discreetly slipped to each other while the the history teacher talked about the First Battle of Bull Run? Pre-planning ensembles for the Fiona Apple concert took time, after all.

I distinctly remember getting a note from one of my closest girlfriends one morning before the bell had even rung to signal the start of first period — and I remember it so distinctly because it was deep, yo. As in body image issues and family drama and all manner of things that were so brave to chronicle on college-ruled paper, and for which all the responding words in the world simply didn't seem adequate enough. Hey, the '90s couldn't be all fun and games!

Sometimes note were decidedly un-heavy, and how fun were those? These were the notes you passed simply for the sake of passing them. They were a way to while away the time between Mrs. Gallo's Calculus class and the glorious moment the bell would ring and set you free from your gilded cage (also known as the classroom). Popular topics were classmates' sartorial decisions — what was she thinking with those JNCOs? — to what you were going to have for dinner that night — helloooo, Hamburger Helper!

Juicy gossip could not possibly wait half an hour to discuss in front of your army green lockers between periods. If you heard an inkling of something spectacularly dramatic, you were compelled — nay, obligated — to scrawl that sacred knowledge down on a piece of paper, stick it in a notebook, and pass it to your bestie. The fact that Jonathan and Audrey just broke up or that a hot new exchange student was seen roaming the halls wasn't the kind of news you could sit on all day long.

In full disclosure, what I'm about to say is in no way condoning cheating. Cheating is a very bad, no good, awful thing to do. Having said that (and sorry, Mrs. Millie!), sometimes tiny morsels of information may have mysteriously traveled from your seat to a friend's during Latin pop quizzes. Weird, I know.

7. The Ones That Are Still Sentimental

You know they type — the ones that still live on buried in your closet somewhere, tucked into a beat up jewelry box or stowed safely in an attic bin. It wasn't always what was said in these special (and often super covert) notes. Rather, it was the way you felt when you read them ... and the way you still do. Whether it's a note from an old flame or a silly exchange between the friend who, to this day, knows all your secrets and loves you anyway, some notes were meant for saving.

More like this
The 'Kenan & Kel' Reunion On 'SNL' Took A Dramatic Turn, Thanks To Keke Palmer
By Brad Witter
The First Trailer For 'That '90s Show' Includes So Many Nods To The Original Series
By Jack Irvin, Alyssa Lapid and Grace Wehniainen
These Are The 3 Most Mellow Zodiac Signs
By Kristine Fellizar
Heinz Just Relaunched A Bean-Tastic '90s Fave
By Sam Ramsden
Get Even More From Bustle — Sign Up For The Newsletter