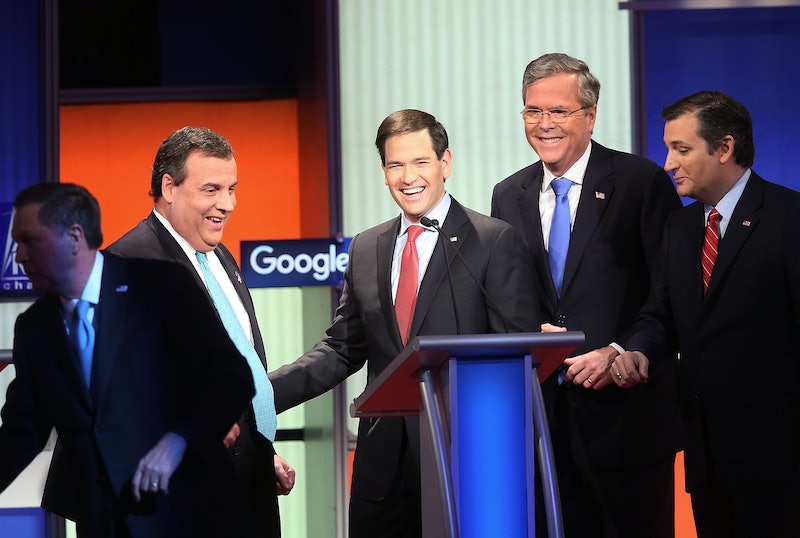 The Republicans are headed back to the stage on Saturday, and while the field has thinned considerably, there are still plenty of reasons to watch ABC for the eighth GOP debate. Just days before the New Hampshire primary the candidates will be in Manchester at Saint Anselm College's New Hampshire Institute of Politics to discuss the big issues — like whether skipping a debate should count against you. Tune in to your local ABC channel at 8 p.m. ET to catch the fun.

Trump will likely be back. He said that skipping the last debate before the Iowa Caucuses could have been a strike against him in the minds of some voters. Plus, with ABC News' Martha Raddatz, David Muir, and local ABC-affiliate WMUR's Josh McElveen moderating, he doesn't have to worry about Megyn Kelly asking questions about women — although these moderators could very easily make him look bad by asking completely fair questions (i.e., "Are you afraid of Megyn Kelly?"). For now, though, the ABC News team can rest easy.

Who else will be on stage is yet to be determined. ABC has said the top three finishers from Iowa and the six candidates who poll the highest in New Hampshire as well as nationwide will be included. There will be no undercard debate for anyone who's not included on the main stage. Only two candidates from the last undercard debate remain in the race, former HP CEO Carly Fiorina and former Virginia Governor Jim Gilmore. Rick Santorum and Mike Huckabee dropped out this week after the Iowa caucuses.

With ABC News' rules, everyone except Fiorina and Gilmore are included. Even Ben Carson, who is currently polling eighth in New Hampshire, does better nationally, coming in fourth place, as he did in Iowa. Gilmore has remained silent on the issue (maybe because his game plan to win includes underwhelming us in every way).

Fiorina, on the other hand, has demanded that the GOP and ABC News revisit the requirements to make space for her on the stage. She wrote a letter to the Republican National Committee on Wednesday:

Our debate process is broken. Networks are making up these debate rules as they go along — not to be able to fit candidates on the stage — but arbitrarily to decide which candidates make for the best TV in their opinion. ... There are only eight candidates left. It's time for the RNC to demand that media executives step aside and let voters hear from all of us.

There are actually nine candidates, including Gilmore. Whether Fiorina has her way or not, it should make for an interesting night of television with Trump back on stage.