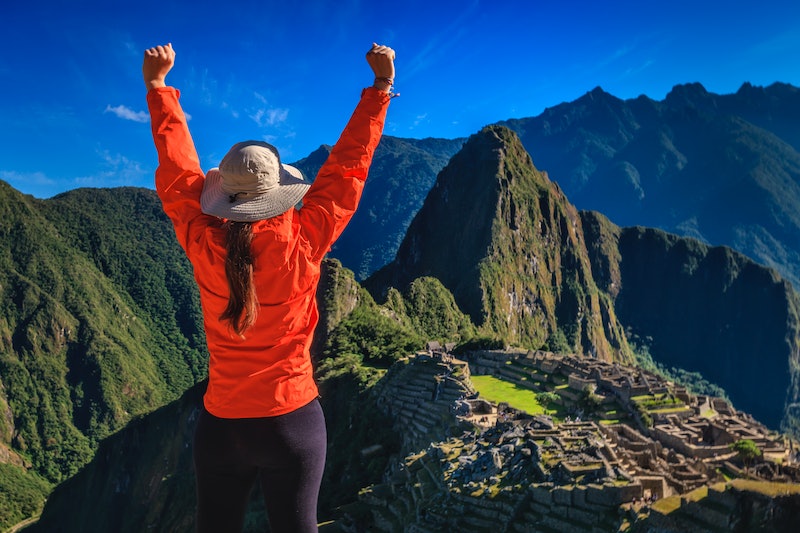 We tend to think of happiness as being a result of either internal factors of satisfaction and contentment, or the result of our external circumstances (like how pleased we are with our job or how fulfilling our relationships are). However, according to a new report out of the UK, there might be another factor at play with regards to our level of happiness: Our age. Unfortunately, though, the study found that the age at which we're happiest isn't until fairly late in life: Those in the 65 to 69 age range reported the highest levels of happiness out of any other age group. Are we doomed to be miserable until we're seniors? Well, maybe not... but still.

The Office for National Statistics in the UK surveyed 300,000 adults between the years of 2012 and 2015, asking them to report their levels of happiness, anxiety, and satisfaction on a 10-point scale. Then, they compared the demographic results to the reported rankings to see if any patterns emerged. Overall, our happiness in life isn't stagnant nor is it ever steadily increasing; rather, it tends to follow a U-shaped pattern. We start out life very happy, then things dip towards middle age, and finally, we climb back up during our older years. In fact, for those in the 16 to 19 age group, happiness level was just slightly below that of those in the 65 to 69 age group. After age 19, people's happiness drops off severely and keeps heading downward until it hits rock bottom at around age 45. It then skyrockets after age 59, with the largest jump in happiness levels happening between the ages of 59 and 65.

Why exactly does our happiness work this way? Researchers aren't really sure. They think that this could possible be due to socio-economic circumstances, since youth typically are supported financially by their parents and also have more freedom and leisure time than their adult counterparts. The same could be true for those aged 65, since most are nearing retirement and getting back into having more leisure time. For those with the lowest levels of reported happiness in the 45 to 49 age group, the researchers speculate that they "may struggle to balance work and family commitments." Sounds about right: The Bureau of Labor Statistics found that adults ages 75 and over spent more time participating in leisure activities than those in any other age group, while 44 year olds spent the least amount of time partaking in leisure. People in the 65 to 74 age range spent the second most amount of time partaking in leisure, which fits in right with the peak of happiness.

The connection that this report found between levels of happiness and leisure time are very intriguing, as perhaps having more time to partake in enjoyable activities is a key to being happy. Other research seems to confirm their findings, as another British study published last year reported laughter and leisure time being the two largest factors that could influence happiness. Another study from the University of Pittsburgh found that having leisure time was heavily connected to health and happiness; indeed, time away from work allowed for greater brain and bodily functioning.

So, if you're looking to boost your own level of happiness, perhaps consider trying to get rid of some work, school, or family obligations in pursuit of some more free time to pursue your hobbies and interests. Retirees don't have to be the only ones enjoying a little bit of leisure!