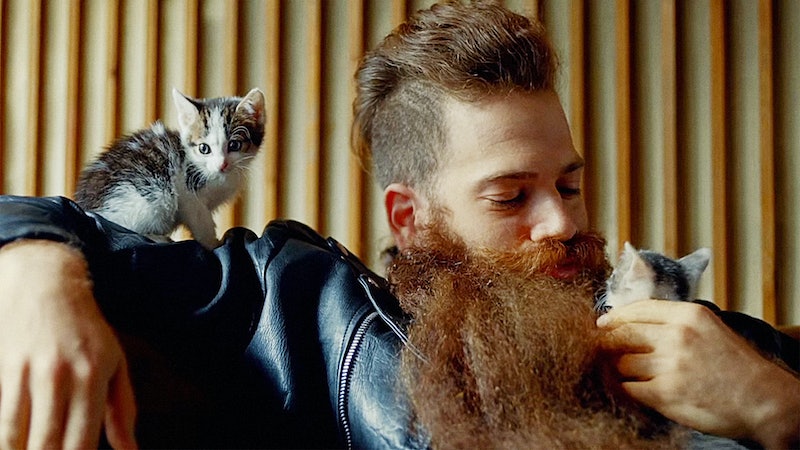 Axe has never really tried to hide what they're all about. The men's grooming brand wants to help men smell good, which will, in turn, help them get with all the ladies. It's not a bad branding strategy for a deodorant or a body spray, but they've completely changed up their advertisement game lately. For example, Axe's Super Bowl 50 commercial is about male empowerment, with the idea being that Axe will not make you better — it will just help you be a better you.

The 30-second spot is part of the brand's new "Find Your Magic" campaign, which launched earlier this month to positive reviews from both men and women. The campaign is all-inclusive, featuring men of all different shapes, sizes, colors, and mindsets. In the longer cut of the commercial, we see a man in a cowboy hat strutting his stuff, while another man in a wheelchair is getting down on the dancefloor with his date. There's a man who is seen Voguing in high heels, while two other men seem to make a connection over corresponding record covers. AdWeek called this new Axe ad an example of the company's "enlightened views" that show a more "grown-up take on masculinity." With this commercial, Axe shatters male stereotypes by showing that today's masculinity isn't so much about being tough and rigid, but about being one with one's emotions, sexuality, and individuality.

Axe seems to be taking a page from Dove's body conscious "Campaign For Real Beauty," which launched in 2004 and featured real women with real curves to show that beautiful doesn't just mean thin. These new Axe ads also stress body empowerment, what with the commercial starting with a husky male voice-over saying, "C'mon, a six pack?" as if it's just so last year. Later, the voice-over confidently explains, "Who needs the looks when you've got the books?" There is absolutely no body-shaming for looking a certain way with this new ad movement Axe has created. There are no comparisons; it's just about celebrating your nose, your moves, your cuddling prowess, your protest skills — basically, whatever makes you, you.

It's a good message, since men, like women, struggle with body image issues. The Atlantic reported that, in a 2014 study of adolescent boys, published in the January issue of JAMA Pediatrics, "nearly 18 percent of boys are highly concerned about their weight and physique." Unlike females, these males don't always want to lose it, but look to gain weight to increase muscle mass. It was also found that male eating disorders were on the rise with the National Eating Disorder Association (NEDA) reporting that "10 million men will suffer from a clinically significant eating disorder at some time in their life, including anorexia nervosa, bulimia nervosa, binge eating disorder." The majority of those who suffer were males ages 14, 17 and 20 years old.

NEDA also found that binge eating, purging, laxative abuse and fasting for weight loss are nearly as common among males as they are among females. Findings from a 2014 study, according to NEDA, suggest that males with eating disorders have a higher mortality rate than females suffering with eating disorders. “You want people to be concerned enough about their weight to make healthy decisions,” Dr. Alison Field, an associate professor of pediatrics at Boston Children’s Hospital, told The Atlantic, “but not so concerned that they’re willing to take whatever means it takes — healthy or unhealthy — to achieve their desired physique.”

While Axe is focused on improving body image issues among young men, this doesn't mean that the commercial has totally given up on the idea that sex sells. This ad still makes it clear that a good touch (plus a little Axe) will go a long way in the bedroom. But it's a shot of a woman in rumpled sheets looking like she's having the best sex of her life that sends this message. Your touch makes her explode, because you're the kind of the guy who knows what a consenting woman wants in bed. The sex used to sell Axe in this ad is enlightened, subtle and female-friendly — a definite step in the right direction. This new Axe ad shows that they're appealing to men who are more GQ than Playboy.

Just look at Axe's Instagram account, where each shot is perfectly filtered and composed to show men who are look very different, but have one important thing in common: they are well-groomed guys who spend a little extra time in front of the mirror because they know a little style goes a long way. These are men who are of this moment, and look at women as their counterparts, not something to be dominated. This ad campaign empowers men by showing us men who are open to change. Men who see that these changes don't exclude for some perceived physical inadequancy; they allow them to be the kind of men they want to be. These Axe products don't make the man, but these kind of enlightened very 2016 men in this new commercial use Axe. That's all Axe needs you to know, and it's a campaign that works beautifully.