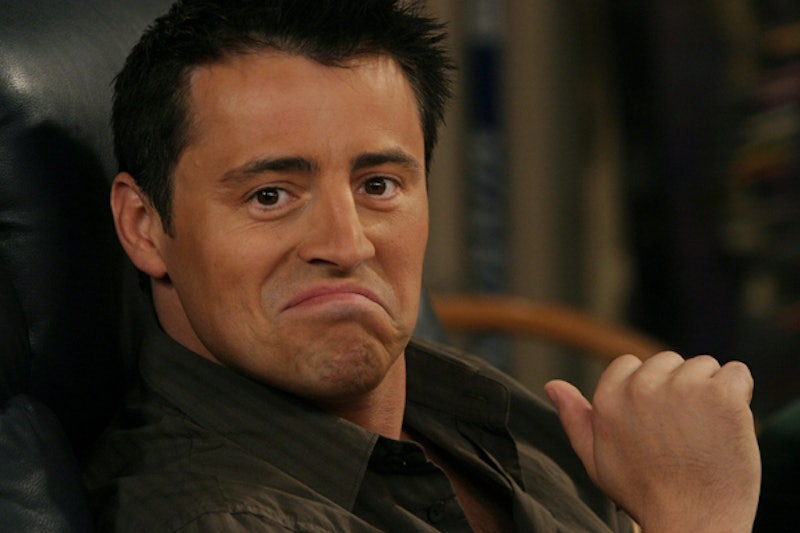 Could you imagine Friends' Joey Tribbiani co-hosting the car-filled BBC show Top Gear? Well, whether you could or couldn't, you don't need to imagine it any longer. The actor behind the hilarious Friends character, Matt LeBlanc, will be joining Top Gear as the first American co-host to appear on the stunt-filled, adrenaline-based British show. Co-hosting alongside him will be Chris Evans — a popular British presenter and producer — and together they will rule the road with what Evans describes as what will be nothing more than them, "Acting out our craziest car notions on screen." He even went so far as to compliment the actor in saying, "Matt’s a lifelong fellow petrolhead, and I’m thrilled he’s joining Top Gear."

However, no one seems to be more excited than Matt LeBlanc himself. The actor released a statement regarding his new gig that says, "As a car nut and a massive fan of Top Gear, I’m honoured and excited to be a part of this iconic show’s new chapter. What a thrill.” But, with all of this talk about cars, I'm still curious about one other opinion... What would Joey himself think of the new role? Yes, I'm well aware of the fact that Matt LeBlanc plays Joey, but he's not actually Joey; still, it's hard to imagine a world where Joey would let this news about himself (in a weird way) go ignored. Do you remember that time when Joey got excited about people just thinking he owned a Porsche in the fifth episode of Season 6, "The One With Joey's Porsche?" Exactly.

So, here are all the ways that I believe Joey would react if he found out he (or Matt LeBlanc, I guess) was going to be co-hosting Top Gear.

When He First Hears The News

Full access to cool cars? Yeah, I'm pretty sure Joey would be pretty pumped about that. To the rest of the Friends crew, prepare your ears for getting completely talked off.

When He Realizes He Actually Needs To Get Behind The Wheel

Being that Joey lives in New York City, he doesn't have much experience driving himself. So, as exciting as getting behind the wheel for some crazy rides might be, it could also put a looming feeling of terror in the back of his mind.

When He Comes Across A Sick New Car

Yes, Joey, you get to drive that. It's within your reach. Let the happy dancing commence.

When He's Taking In The Car Facts

Joey has always put the utmost respect and effort into the things he cares about. I'm expecting loads of research about cars and tons of test drives so that he can prepare himself for the big role. This is definitely not a joking matter. It's his new lifestyle.

What better way to dominate as a ladies man than to be surrounded by a bunch of cool cars, right? Something tells me that Joey's game is about to get even stronger.

When He Gets That First Paycheck From The Gig

Seriously, what else would Joey spend his money on? Let's be real here.

When He Finally Sees Himself On TV

It may not necessarily be acting, and it may be British television, but I think it'll be more than enough to please the struggling New York actor. Say goodbye to those bad commercials, Joey. Just say goodbye.

Matt LeBlanc starts his job as a Top Gear co-host on the BBC starting May 8, 2016. And I'm sure somewhere, somehow, Joey will be tuned in.