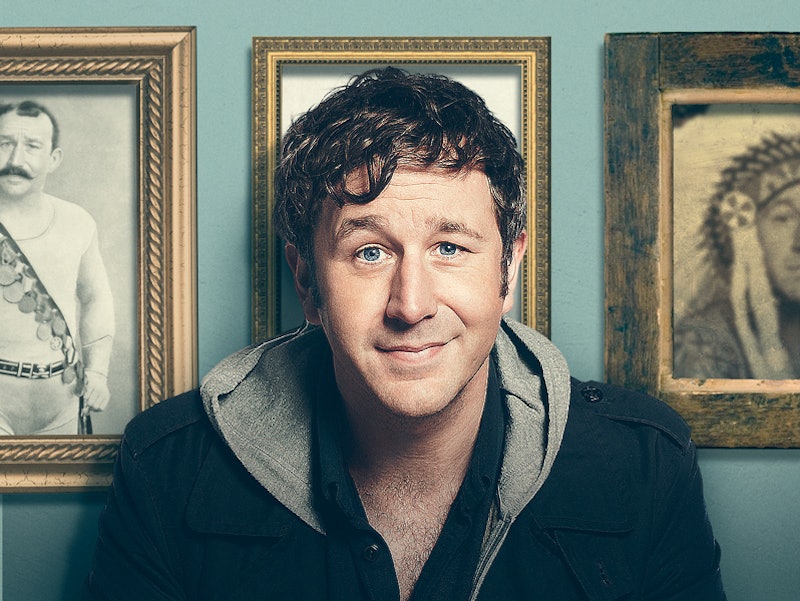 If you watch HBO, there's a damn good chance you have a huge crush on Chris O'Dowd by now, and I don't just mean from repeated viewings of Bridesmaids and Girls. While the 33-year-old actor's turn as a lovable Irish cop in the brilliant, hit comedy might be where you can exactly trace the origins of your O'Dowd crush (he was a total chump on Girls, but he's still too handsome to let that get in the way), Family Tree is the thing that should root in firmly in your heart.

On the low-rated, but completely charming and hilarious HBO series — which had its Season 1 finale on Sunday night — O'Dowd plays Tom Chadwick, a gangly, adorable chap tracing his ancestor's footsteps, one outrageous Christoper Guest character at a time. No, O'Dowd's brokenhearted, genuinely nice guy Tom on Family Tree isn't much of a departure from his brokenhearted, genuinely nice guy Rhodes in Bridesmaids, but that doesn't make him any less crush-worthy, especially on the television landscape.

Compared to our other favorite television comedy crush, Tom reigns supreme right now. Don't get us wrong, we still love New Girl's Nick (played by the equally adorable and talented Jake Johnson), but Tom has some serious ambition, even if it's just finding out the roots of his goofy family. Plus, Tom just seems more attainable to the average gal (he's the thinking woman's sex symbol) and O'Dowd can make accidentally swallowing a fly seem endearing. Now that is hot.

Better yet, during last night's season finale, Tom not only assisted his crazy sister in getting her beloved puppet Monkey back in her arms (well, back on her hand, really), but he finally succumbed to his feelings for Ally (Amy Seimetz), a lovely gal he met during his travels to the States. HBO, please bring back this gem of a show back to not only let us know the fate of Ally and Tom, and to see who else pops up in the goofy Chadwick clan, but really because we can't imagine having any less Chris O'Dowd in our lives.

More like this
Here’s Where Caitlin Atwater Is After HBO Max’s ‘The Staircase’
By Brad Witter and Lindsay Denninger
IRL ‘Staircase’ Characters Todd & Clay Peterson Still Think Their Dad Is Innocent
By Gretchen Smail and Rebecca Patton
Elizabeth Olsen's Chris Evans Friendship Update Was Accidentally Hilarious
By Grace Wehniainen
The Time Traveler’s Wife Book Has A Heartbreaking Ending
By K.W. Colyard
Get Even More From Bustle — Sign Up For The Newsletter