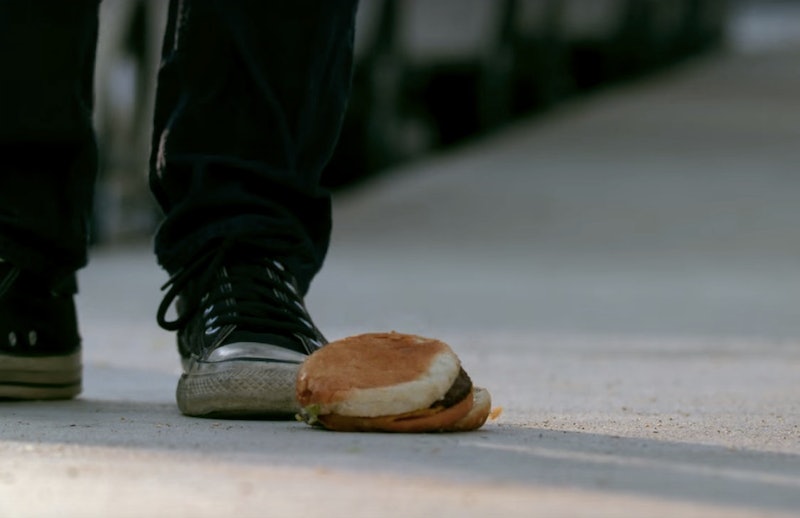 We've probably all dropped food on the ground and justified picking it up and eating it anyway with the "five-second rule." But is the five-second rule real? How scientifically sound is the idea? Are we totally just making it up? Well, good news: A new video from The Science Channel's The Quick and the Curious webseries examines the five-second rule up close, to see if it really is safe to follow. Here's the verdict.

Now, in case you've somehow never encountered the five-second rule before (have you never dropped your food on the ground? You must have super powers), the notion behind it is this: If you fumble your tasty morsel and it hits the ground, it's said to be OK to pick it up back up and eat it as long as it's been on the floor for no more than five seconds. As to whether or not it's legit? Well, it turns out that it's not really a yes-or-no question, but rather depends on a few different factors.

You see, the five-second rule is really part of what the Science Channel's video calls the "30-second moisture-and-surface rule." Explains host Mike Meacham, "When any food flops on the floor, small amounts of bacteria will jump aboard immediately. But moist foods left longer than 30 seconds collect 10 times the bacteria than those snapped up after only three." The bacteria that are going to jump on board of wet food that's been left on the ground for more than 30 seconds include E. Coli, salmonella, and listeria, which are huge culprits of food poisoning. E. Coli alone is responsible for more than 2,000 hospital visits in the United States per year. These bacteria? You probably don't want to eat them.

However, both the amount and the type of bacteria that move onto your food after it hits the ground can vary depending on whether the food is wet or dry. As such, the 30-second moisture-and-surface rule gives us an excellent represtation of the worst case scenario: Wet food that has been on the ground for 30 seconds or longer has a high possibility of being covered with a lot of the aforementioned E. Coli, etc. If your food has been on the ground for less than 30 seconds, there will likely be less bacteria (and sense five seconds is so much shorter than 30, it makes the whole thing a lot safer; similarly, if the food is a dry food, rather than a moist one, there will also likely be less bacteria.

The video concludes that you can safely follow the five-second rule for most (although not all) foods — but it's up to you to make the judgment call.

Now that we know what the folks at The Science Channel have to say about this, is there other research that supports their conclusion? Jillian Clarke conducted a study examining the five-second rule during an internship at the University of Illinois at Urbana-Champaign as a part of her doctoral candidacy. She tested the bacterial levels of the floors in the school dorms and cafeteria and found very little bacteria at either source. Her research supervisor was actually suspicious of these results and asked her to conduct the experiment again, only to have her arrive at the same conclusion. "I think the floors were so clean, from a microbiological point of view, because floors are dry, and most pathogens like salmonella,listeria, or E. coli can't survive without moisture," she told WebMD.

Clarke's study also found a few more interesting tidbits about the five-second rule: Women were more likely both to be aware of the rule and more likely to follow it; and — perhaps unsurprisingly — people were more likely to invoke the rule when it came to sweets like candy and cookies, versus healthy food like broccoli.

There is one more factor that determines how safe it is to follow the "five second rule," however, that's explained in the video. To find out what it is, watch the full video below.