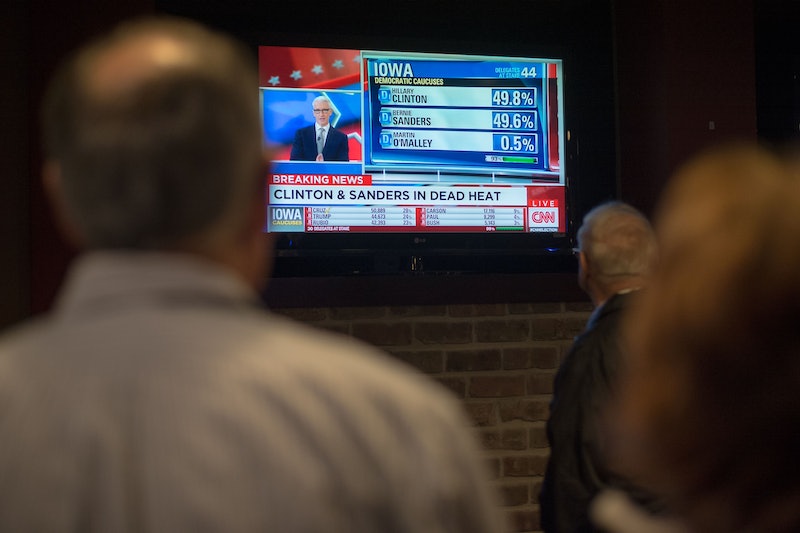 There's nothing like instant gratification — and for those of us who watch politics as though you would a sporting event, getting minute-by-minute updates is key (though these players, admittedly, are perhaps a little less limber than your average football player). And as viewers of the political sport learned during Monday night's extremely close Democratic Iowa caucus, these instant updates may illustrate an all-important fraction of a difference between two candidates. Next Tuesday's New Hampshire primary will more than likely prove to be just as enthralling, with candidates Hillary Clinton and Bernie Sanders going head-to-head by themselves for the first time. With that in mind, here's how you can watch the New Hampshire primary results in real time.

While cable news networks like CNN and Fox News are sure to broadcast results as they become available, viewers can also tune in online for live results of the primary. The website POLITICO boasts an interactive map that lets viewers know when results have partially or fully come in for each primary state. Likewise, they have live results coverage of key primary election states, including New Hampshire. The detailed breakdown of the results includes the candidates' percentage of votes received and their placement, as was the case with their breakdown of the Iowa caucus:

The Des Moines Register will also be providing live updates of the New Hampshire primary. Thus far, the newspaper has been instrumental in providing results to voters, and has even gone so far as to contest some of the reported numbers for this week's Iowa caucus. They are calling for an audit of the Iowa caucus results to provide better transparency, which some think would tip the numbers in favor of Sanders.

Being able to watch the Granite State's results as they come in will give voters an indication of who they'll be seeing occupy the political sphere for the upcoming primary election season. Because New Hampshire is the first primary to take place, candidates have been known to drop out of the race altogether after scoring poorly in the state. According to data from Real Clear Politics, New Hampshire might indicate the end of campaigns for candidates Ben Carson and Carly Fiorina. Polls place both of them under four percentage points overall in the state. And though Clinton certainly won't be dropping out of the race, she does trail 20 points behind Sanders, a momentum the Sanders camp should seize upon.

So whether you tune in via television or the internet, results for the New Hampshire primary will be gripping. And since it takes place just two days after the Super Bowl, it will give us another riveting game to watch.