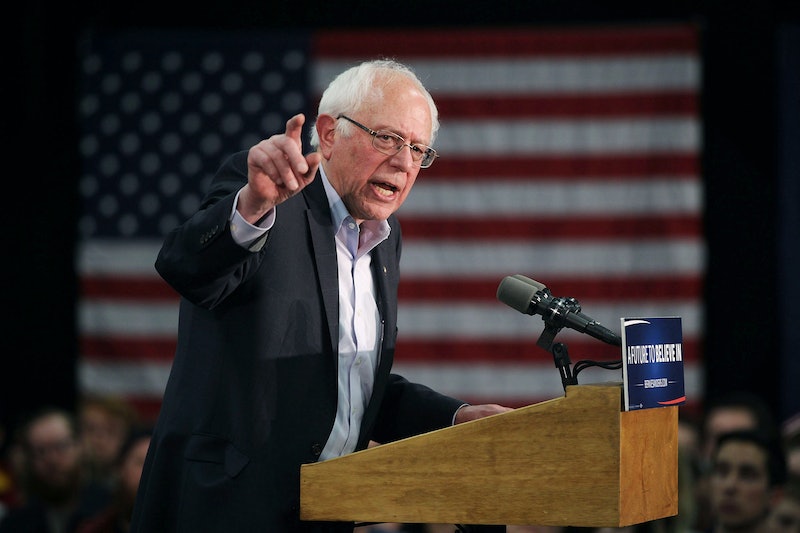 On Tuesday, New Hampshire will host the first primary of the 2016 presidential election, and it figures to be a huge event. While the Iowa caucuses are a notoriously shaky predictor of future success, when you add the New Hampshire primaries, you start to get a much stronger sense of who's up and who's down — only one candidate has ever won their party's nomination while losing in both states, and that was Bill Clinton back in 1992. So, how will the Republican and Democratic primaries differ in New Hampshire?

As has been obvious for the last several months, there's been one big, enduring difference between the race on the Democratic and Republican sides, and it's likely to make itself felt yet again — I'm talking about the swollen size of the GOP field. It narrowed pretty significantly since the Iowa caucuses concluded last Monday, but it's still a thicker scene than the Democrats are dealing with. At present, there are still a whopping nine Republican candidates, headlined by names like Donald Trump, Ted Cruz and Marco Rubio, with a surprising number of also-rans like Carly Fiorina, Chris Christie, Jeb Bush, and Jim Gilmore (?!) still hanging on.

What that means, in simplest terms, is that whoever wins the New Hampshire primary for the Republicans is going to almost assuredly do so with a lower percentage of the vote than what the Democratic winner gets. That's simply the nature of an overstuffed race — the more options there are, the more thinly everyone's support is likely to be spread. Who knows what would've happened on Tuesday if there had only ever been four GOP candidates? Three even, or two?

The fewer choices the GOP base would've had, the easier it would've been for someone else in the Republican rogue's gallery to rise up and undo Trump. Hell, maybe he never would've been a contender in the first place. In simplest terms, a huge field means things are more volatile, and tougher to predict. Because every vote that some dead-end, single-digit candidate sucks up is one more vote that the top troika of Trump, Cruz, and Rubio can't snag for themselves.

On the Democratic side, things will be comparatively straightforward, although no less contentious — the choices are down to Hillary Clinton, Bernie Sanders, or nobody. Consequently, there won't be any repeat of what happened in Iowa, when Martin O'Malley's 0.6 percent sliver of the vote actually could've swung the outcome. However the New Hampshire primary shakes out, it'll be because the entire Democratic electorate split itself between just two candidates, a binary choice that will leave far less indecision or "what ifs" in the aftermath.

This also means that you won't be reading reports of Democrats dropping out of the race left and right once New Hampshire is over, which is exactly what you're going to see on the Republican aide after New Hampshire. If candidates like Fiorina, Bush, Christie, and Carson really decide to fight on after dismal finishes in both states, that's about as pure as example of throwing good money after bad as you're going to find. It'll be fascinating to see how it all shakes out.