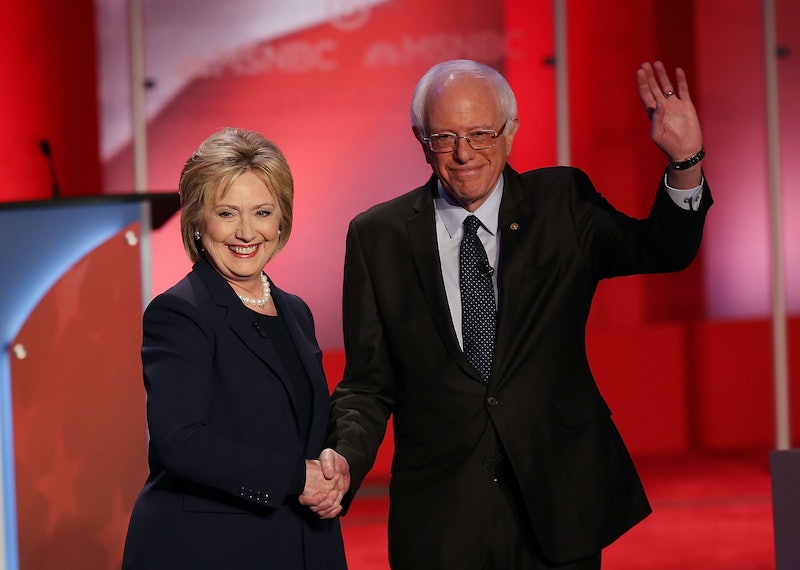 Throughout Thursday night's Democratic presidential candidacy debates, moderators Chuck Todd and Rachel Maddow made certain to throw Hillary Clinton and Bernie Sanders some curveballs, but this question may have been one that wasn't too unexpected. When asked whether she would pick Sanders as her running mate in an effort to unite the Democratic Party, Clinton had a skillfully-crafted response. What exactly did Clinton say that could cast the establishment into fits of speculation? Well, she didn't want to get ahead of herself, but she did respond to the notion of making Bernie her vice president.

The floodgates have opened in New Hampshire as of Thursday evening, and now it may turn into the talk of the nation. Could Clinton and Sanders end up as a team? Basically, Todd went about it cleverly, but she bested him. He started:

All right, before we go, I want to ask each one of these. Secretary Clinton, you've made it clear when you look at Sen. Sanders, you do not see a president, but do you see —

Clinton responded, "I never said that." Todd continued, "But do you see — do you see a vice president?"

Whoa. It sounded as though he was attempting to pit the two against each other in another battle of progressive versus progressive, but that question took quite an alternate turn.

Yet, Clinton somehow seemed to know it was coming. Then, Todd asked her outright:

Would you unite the party by trying to pick Sen. Sanders as your running mate?

Her answer is as diplomatic and as political as answers come, and she deserves some credit for its suitability and timing:

Well, I'm certainly going to unite the party, but I'm not — I'm not getting ahead of myself. I think that would be a little bit presumptuous. If I'm so fortunate as to be the nominee, the first person I will call to talk to about where we go and how we get it done will be Sen. Sanders.

Sweet response, Hillary. Yes, unite the Democratic Party. Yes, don't get ahead of yourself, and yes, definitely talk to Bernie if the time comes, since it is likely he'll do just the same. After all, Sanders did have his own fitting response to the question. Todd asked, "Senator, would you consider the secretary?" to which Sanders responded:

I agree with what the secretary said. We shouldn't be getting ahead of ourselves. And as I have said many times, you know, sometimes in these campaigns, things get a little bit out of hand. I happen to respect the secretary very much, I hope it's mutual. And on our worst days, I think it is fair to say we are 100 times better than any Republican candidate.

Hear that? He said 100 times better than any Republican candidate. So what is the likelihood that the two will end up on the same presidential team? Considering the way these debates are looking, it's rather slim. However, few could say they anticipated President Obama appointing Clinton to secretary of state, so nobody knows when the proverbial tides could turn. Either way, game on, Democrats. Game on.