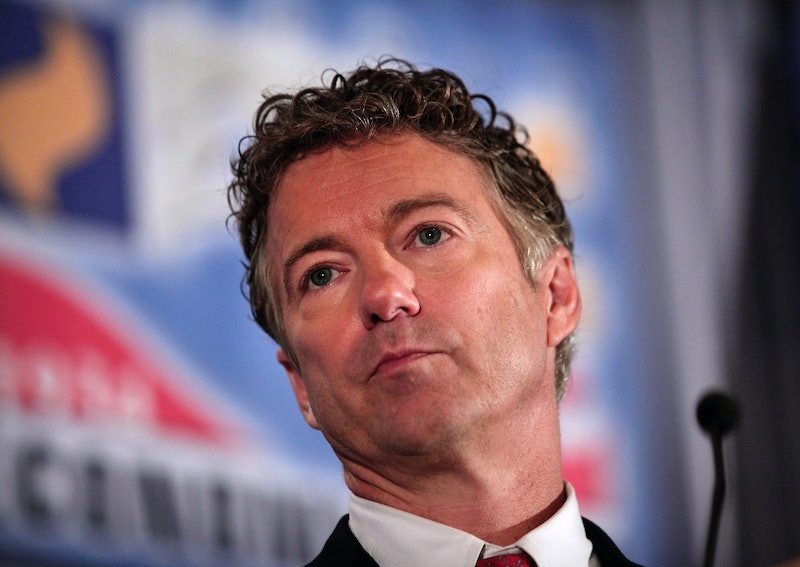 On Tuesday evening, President Barack Obama delivered his fifth annual State Of The Union address. And guess what? The Tea Party didn't like it. Neither did Sen. Rand Paul, whose video response was released shortly after Obama concluded his speech. Paul spearheaded the Tea Party's video response last year, but left it up to Sen. Mike Lee this year, who unsurprisingly blasted the president's policies, past and present. Paul and Lee made up half of the GOP four-pronged video response to Obama's address, which some say reflect the splintering of the party. "We’re just trying to get more people to listen," insisted Paul.

The primary GOP response, aired by major networks directly after Obama's speech, saw Republican congresswoman Cathy McMorris Rodgers focus on traditional family and religious values, with a nod to job growth and the expansion of the middle classes. The first Cuban American to be elected to Congress, Rep. Ileana Ros-Lehtinen, provided a similar Spanish-language speech to Rodgers' in a separate video. Both women were vague regarding specific policy, but promised that the Republican Party offered a route to a brighter and more hopeful America.

Then there was Rand's and Lee's speech responses. Both men were less vague about policy than Rodgers and Ros-Lehtinen, but often leaned towards ideological promises over specific programs. And while Rodgers mostly held back on criticizing Obama personally — instead saying that "the President made more promises that sound good, but won’t solve the problems actually facing Americans — Lee wasn't shy in his condemnation of Obama.

Today, Americans know in their hearts that something is wrong. Much of what is wrong relates to the sense that the ‘American Dream’ is falling out of reach for far too many of us. We are facing an inequality crisis – one to which the President has paid lip-service, but seems uninterested in truly confronting or correcting... Throughout the last five years, President Obama has promised an economy for the middle class; but all he’s delivered is an economy for the middle-men...

[Our] principles and these policies will work – and will put Americans back to work. Not just by cutting big government, but by fixing broken government. Not just by making government smaller but by promoting bigger citizens, stronger families and more heroic communities.

But just an hour and a half after Obama's address, error messages were stopping viewers from watching Lee's message on both the Tea Party's official YouTube channel and on Lee's website.

Meanwhile, Paul delivered his own response, making the case for limited government. He argues that the government, rather than the market, determines whether small businesses can succeed.

Government spending doesn’t work. It doesn’t create jobs. Only the democracy of the marketplace can find those capable of creating jobs.... The ticket to the middle class is not higher taxes on the very businesses that must create the jobs.

More like this
Watch Jacinda Arden’s Devastatingly Honest Resignation Speech
By Sam Ramsden
What The UK Blocking Scotland’s Gender Recognition Bill Means
By Sam Ramsden
Why Being “Too Sensitive” In Relationships Is A Good Thing
By Lexi Inks
Man Meets Politics: ‘Boy Meets World’ Star Ben Savage Is Running For Congress
By Jake Viswanath
Get Even More From Bustle — Sign Up For The Newsletter
From hair trends to relationship advice, our daily newsletter has everything you need to sound like a person who’s on TikTok, even if you aren’t.