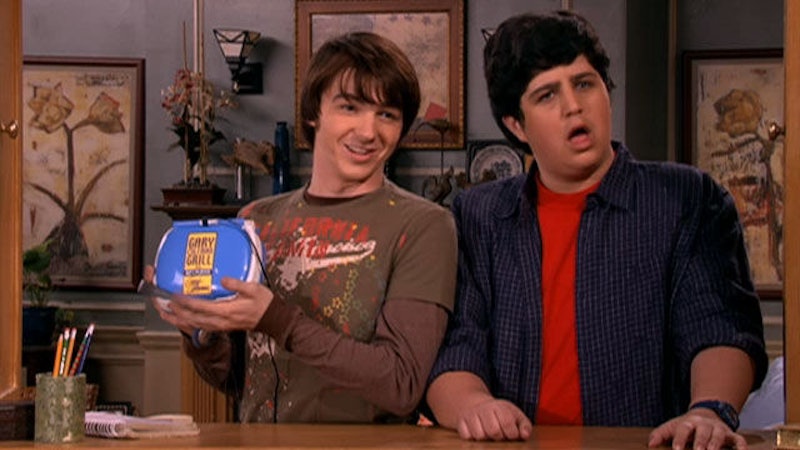 Can you believe it's been nine years since the Nickelodeon hit, Drake & Josh, was on air? Drake & Josh was one of a long-line of All That spinoff shows, starring Drake Bell and Josh Peck, who were then known best for their roles on The Amanda Show. (The Amanda Show, as you may have guessed from the title, starred Amanda Bynes who was then known best for her roles on All That. Drake & Josh also led to iCarly, starring Miranda Cosgrove aka Megan Parker.) Get ready to feel every single one of those nine years because Drake and Josh have reunited for a photo on the set of Peck's new show, Grandfathered, on which Bell is about to guest star.

The photo gives amazing callbacks to Drake & Josh that will warm the heart of any fan, but it's also a great look at how much things have changed for the characters as well as the actors. After all, if you look at the expressions and the body language here, it's a complete reversal of their roles on the show. Drake & Josh followed Drake Parker and Josh Nichols, who become stepbrothers after their parents get married. In addition to forming something of an odd couple, between Josh being a good guy, responsible son, and excellent student and Drake being a lazy musician lacking in book smarts and common sense, the pair were frequently terrorized by Drake's younger sister, Megan, who basically tormented them on a daily basis while receiving very little punishment.

The boys' shenanigans ran the gamut of typical sitcom fare, ranging from being forced to assist in the looting of their own home to accidentally running over Oprah in a car. In nine out of every 10 situations, it was Drake who was dragging Josh kicking and screaming into shenanigans, and Josh was frequently the punchline of every joke and the fool in most situations. Now take a look at this photo.

In it, Josh is the one smiling wide, confident, and, dare I say it, cool, while Drake looks more than a little awkward, almost as if he was caught off-guard. That's a total role reversal from the show in which Drake was the one who had almost effortless cool, even when he was being a giant dork, and Josh turned awkwardness into something of an art form. Our "brothas" have grown so much in nine years that it can be quite mind-blowing to look at this photo and remember that these two strapping young men are the same strapping young men who used to do things like this on a regular basis.

BRB, I've got feels to go and grown in.