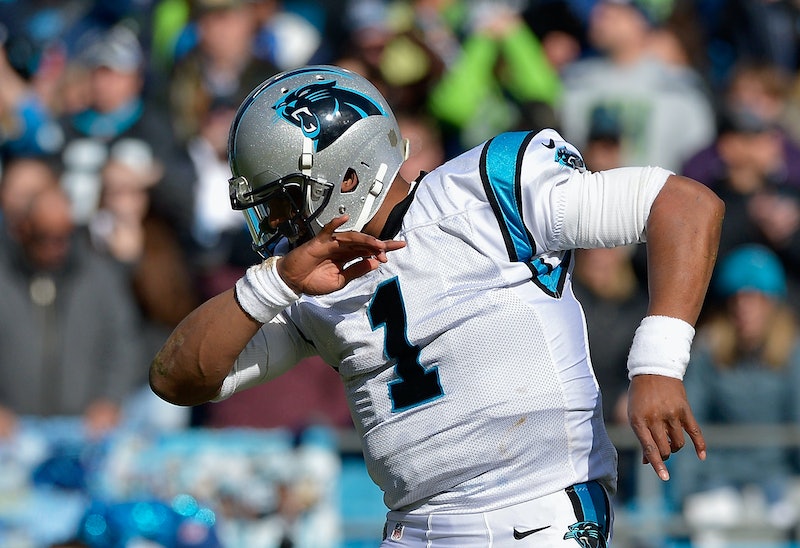 Aside from the hilarious commercials, overblown halftime show, and actual football, the most entertaining part of the Super Bowl every year is the athletes' victory dances after each touchdown and when the game concludes. There's nothing quite like seeing a massive man in tight pants and a helmet do a little jig after successfully running the ball into the end zone. On Sunday, you can expect to see a new dance move in the Super Bowl from Cam Newton and the Carolina Panthers — the dab. The simple move has caused some controversy, as dabbing can also mean smoking concentrated marijuana oil, but doing the dab is purely theatrical.

Newton, the Panthers' quarterback, has been showcasing the move all season, considering he's had a lot to celebrate with 45 touchdowns and the Panthers' record of 15-1. The beauty of the dab is that pretty much anyone can do it — all it requires is outstretching both arms, bending one at the elbow, and bobbing your head toward said elbow once. Yep, that's it. Newton's move has become so well-known that kids are even building snowmen of the player in the dab stance. So, be on the lookout for the victory dance any time Newton or his team scores.

Because the name is so similar to the drug term dabbing, the move has been misinterpreted by some as drug-related. When Seahawks defensive linemen Cliff Avril and Michael Bennett were asked if they dab at a news conference recently, Bennett responded, "That's illegal." The reporter had to clarify that he meant the dance move. Of course, the move could have originated in response to the weed trend, but it's evolved into its own thing.

The dab was introduced to the world by Atlanta-based hip hop and rap groups, where Newton's from. Though it's unclear who actually invented the dab, Migos' song Look At My Dab is entirely devoted to the simplistic dance. While the dab is a little boring when continued for a full song, it's perfect for a short-lived sports victory.

If Newton normally celebrates touchdowns with dancing, I can only imagine that he'll bust even more moves than normal on Sunday. A Super Bowl touchdown is much more exciting than a normal touchdown after all. The craze has permeated the whole state of North Carolina, so all the Panthers could join in on Newton's signature move. Here's to hoping there's a dramatic dance number performed by the team, featuring their star quarterback and the dab — in addition to the actual football game of course.

More like this
The David Beckham Qatar Controversy, Explained
By Sophie McEvoy
North West Has Mastered The Wednesday Addams & Lady Gaga TikTok Dance
By Jake Viswanath
Here’s How To Find Your Apple Music Replay For 2022
By Melanie Mignucci
Mollie King & Stuart Broad Just Shared The First Pic Of Their Baby
By Sophie McEvoy
Get Even More From Bustle — Sign Up For The Newsletter