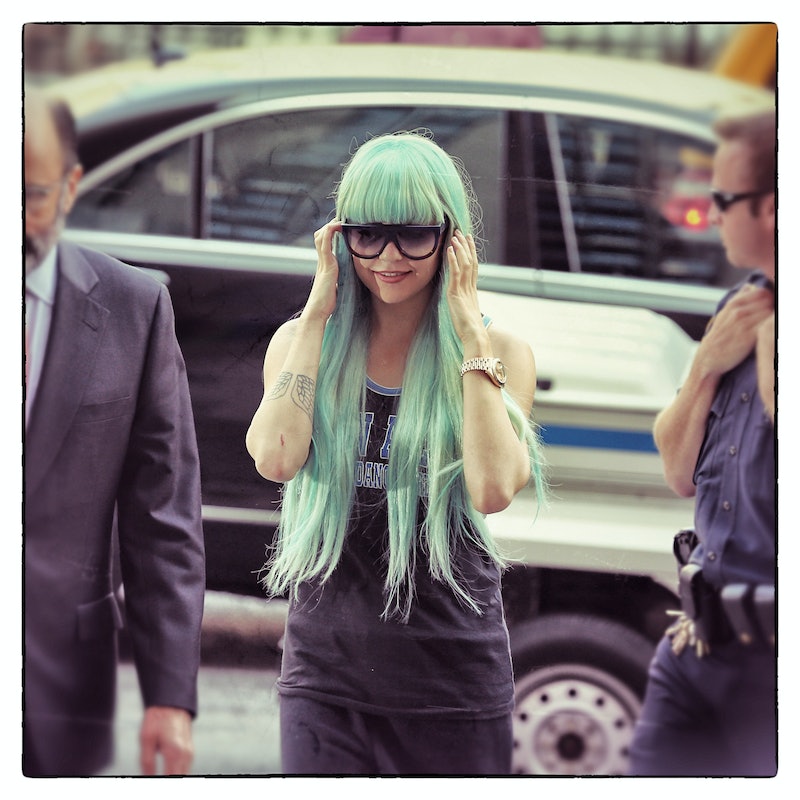 And I do mean "enjoy." Because nearly everyone watching — media or not — has looked at the spectacle with a sense of fascination and glee. Some of us are laughing at the actress' bizarre antics because we assume this is all fake, an I'm Still Here-type act that will eventually be revealed with a movie and book deal for Bynes. Others simply thrive on Schadenfreude of the stars.

But, regardless, we're all guilty of watching and, more accurately, waiting to see what's next. No matter how macabre the direction it will take. After all, it's already gone down a dark path: Not only has Bynes been placed into psych evaluation following an arrest for drug possession, but reports point to a possible Twitter alter-ego for the actress, whose exploits have so far played out a bit too publicly on the social network.

On Tuesday, Fish Wrapper pointed out a Twitter account often retweeted by Bynes that sounds remarkably like tweets posted by the actress herself. Not only have the location and number in the Twitter handle @persiannyc27 caused some to wonder whether Bynes owns the account named "Barbie" (the 27-year-old Bynes currently resides in New York... and remember the blonde Barbie wig she was arrested in?), but the account has also made Bynes-esque declarations of dislike for its followers and referenced Drake, the rapper Bynes has a complicated relationship with.

The account is causing some to fairly or unfairly generalize about Bynes' mental health, despite the fact that it's not confirmed to actually belong to the actress. Is she schizophrenic? Does she suffer from multiple personality disorder? As media and fans wait to find out, nearly 10,000 Twitter users have started following Barbie — a user with 0 handles followed and just 18 tweets since the account was started in May.

So we're all watching... but we're not doing anything. It remains to be seen exactly where Bynes' troubles will lead her, but it's safe to say we'll be there with our computers and phones at full power. And so it's clear that, in the past 426 days, Amanda Bynes has become the most famous personification of the Genovese Effect, known informally to most as the Bystander Effect.

The phenomenon was named in the 1960s, when Kitty Genovese was murdered in front of neighbors, who sad idly nearby while she screamed for help. Following the public murder — and it's very public aftermath in the newspapers — psychologists coined the Genovese Effect, which can be boiled down to a simple concept: The more bystanders that surround you in your time of need, the less help you're going to receive.

Which means the Genovese Effect becomes that much more prevalent, and dangerous, in the digital age when we're surrounded by billions of bystanders. We've already seen it play out to tragic circumstances — in 2011, 18-year-old Ashley Billasano posted 144 tweets over the course of six hours about her troubled past and her intent to commit suicide, and not one follower came to her aid. She killed herself the same night.

Media and people who felt they knew better scoffed at those involved with the Billasano suicide, condemning friends of the teen who failed to intervene in her final hours. Yet, two years later, those same people are posting constant updates regarding Bynes' instability. There's no feeling of responsibility to help Bynes, or to at least do what we can to usher her out of the public eye. After all, she's a Hollywood celebrity with over 1.7 million followers — surely one of them will step up and help her, right?

One has tried. Bynes' former friend, publicist Jonathan Jaxson, attempted to get officials to help the actress in May, albeit in the most passive of ways (including calling the press):

But one out of 1.7 million isn't nearly enough. And Bynes' standing as a Hollywood celebrity puts her even more in danger — the Genovese Effect claims we are less likely to help someone we share few similarities with. Following Bynes' escape from Hollywood, here's guessing even former co-stars and co-workers are feeling more and more distanced from the actress.

Sure, Bynes might find the help she needs, clean up her act, and renew her career as one of the industry's most promising young actresses. But we're a bit too comfortable waiting to see if that happens, knowing full well there's a good chance it won't. We'll continue to be part of the 1.7 million followers who watch actress' life unravel — but we'll also continue be part of the 0 followers who help her. After all, we're just bystanders.

More like this
Pamela Anderson’s Dating & Marriage History Could Be Its Own TV Series
By Jake Viswanath
Austin Butler Recalls Lisa Marie Presley Showing Him Elvis’ Bedroom
By Jake Viswanath
Another Side Of Rupert Grint
By Maria Sherman
Jennifer Coolidge Hunted For Jewels & Lashes In J.Lo’s Hotel Room
By Jake Viswanath
Get Even More From Bustle — Sign Up For The Newsletter
From hair trends to relationship advice, our daily newsletter has everything you need to sound like a person who’s on TikTok, even if you aren’t.