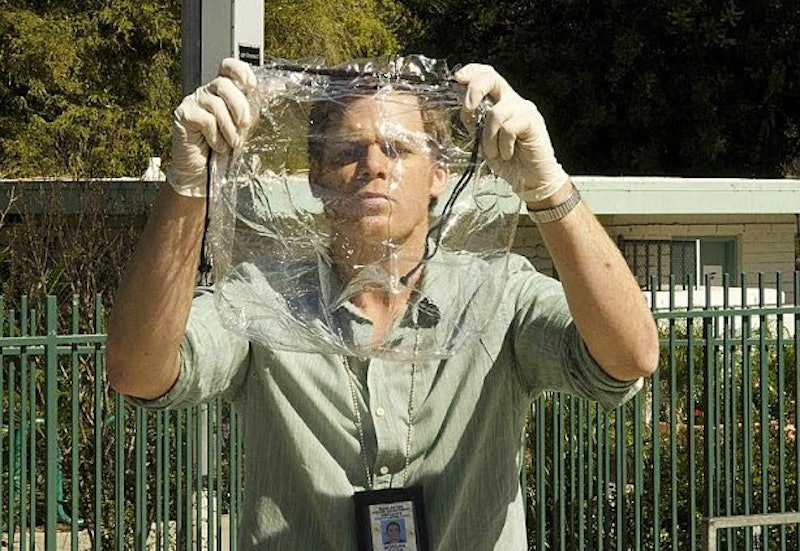 Dexter pulled a fast one on viewers last week. The series introduced the Psychopath Whisperer and Miami P.D. consultant Dr. Vogel as a potential final foe for Dex: an impossibly smart doctor who aimed to make Dexter's final run an excruciating game of cat and mouse. Instead, Vogel reveals herself as a mother figure and drops a rather sympathetic bomb: she not only helped create Harry's code, she believes psychopaths are "a gift," and that Dexter "is perfect."

While we've clearly bought into Dex's mission to kill the bad guys in order to control his dark passenger, are we malleable enough to actually adopt Vogel's viewpoint too?

As it turns out, there are few pieces that make it sort of possible.

1. On some level, we love Dexter too, or we wouldn't be watching. Even as he berates himself for destroying Deb; even as he carried the guilt of breaking the code for La Guerta; even when he questions the fact that his lifestyle puts his son in danger, we are rooting for him. Dexter needs to learn lessons, he needs to grow and change, but the last thing we want is to see him fail, get caught, or give up. Is it possible that we've bought into Vogel's view that Dexter is perfect already? Or do we heartless enough to just want the drama to continue at any cost? Something tells me we wouldn't still be invested after seven years if we didn't hold a decent amount of actual affection for the good psychopath.

2. Vogel claims that many top CEOs and politicians are psychopaths, but is this exaggeration or something pulled from real science? As it turns out, Vogel is partially correct. According to a Forbes interview with Jon Ronson, who wrote The Psychopath Test: A Journey Through The Madness Industry, some CEOs are psychopaths. Ronson cites Al Dunlap, the former CEO of Sunbeam who was "a notorious downsizer," "a man who seemed to enjoy firing people," and someone who once told his wife he "wanted to know what human flesh tastes like" and refused to go to his parents' funerals. This man was a successful CEO, and according to Ronson, a probable psychopath, but he's the exception, not the rule.

Still, traits often seem to match when comparing successful leaders or politicians and a typical psychopath. "Traits that are common among psychopathic serial killers—a grandiose sense of self-worth, persuasiveness, superficial charm, ruthlessness, lack of remorse and the manipulation of others—are also shared by politicians and world leaders," writes Kevin Dutton in his 2012 study, The Wisdom of Psychopaths . And while Dutton's study draws some significant similarities, they're not one-size fits all. Applying that theory overall is like saying someone like Saddam Hussein is in the same class as some average, mildly corrupt U.S. senator. It's just not so.

Dr. Vogel has a point, but she's also quick to throw that blanket statement down. I'm with Dexter when he responds to her idea that "mankind wouldn't exist without [psychopaths]" by reminding her that "there's a lot of mankind that doesn't exist because of them" too. With an idea like this, it's important to remember that essential concept: balance.

3. On that note, Dexter is more balanced than we imagine any other serial killer could be. There's a reason we've allowed Dexter to be the hero, hunting down the truly bad serial killers while we root for him to escape the law each and every time (even when the story hasn't exactly satisfied us). It's because, on occasion, Dexter breaks down, unable to carry the weight of his own dark passenger. It's moments like the one when he washes the blood off of his son's stuffed toy or when he tells Vogel he can't be a gift because "he destroys everything he cares about" (Deb and his own short-lived marital bliss for a start) that make him human and someone who couldn't possibly be a full-blown psychopath as we've come to understand them in a narrative setting. How can someone who lives by a moral code that's ultimately ridding the streets of criminals and feels enough remorse over his existence to call himself a "mistake" be completely unforgivable? He can't. This is television, after all.

But that's exactly why Dex probably isn't revolutionizing our view of mentally-disturbed serial killers on the reality side of life. Do we think Vogel will accept a half-victory?