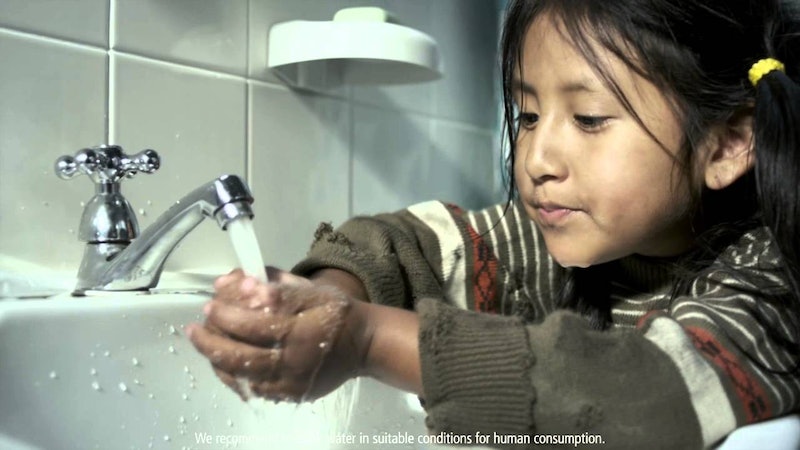 The Super Bowl is the ultimate platform for advertisers to get their products to the masses. While some others are toting big name celebrities, the toothpaste company Colgate have gone a decidedly different path in their first-ever Super Bowl ad: To put it simply, Colgate's Superbowl 50 ad wants to save the world. And the facts behind Colgate's "Save Water" Super Bowl ad will totally make you want to change your ways.

The Colgate ad "Save Water" has a simple premise: According to the ad, every time you brush your teeth while letting the tap run, you waste four gallons of water. You may be thinking "wow, four gallons, that seems like a lot," — well, it is. To put things in perspective: As DoSomething points out, that is equivalent to the amount of water most people in developing countries have for an entire week. And I'm not talking about to just brush their teeth with. They have to bathe, wash their food, and drink all from that small amount of clean water.

According to Colgate, Americans are on average letting 3,000 gallons of water a year go down the drain, literally, by wasting 8 gallons of water every day. And this is just from brushing teeth! I can't even imagine what one my having-a-philosophical-examination-of-my-life showers would equate to.

It is estimated that 189 million people will watch Super Bowl 50. If that holds true, it will be the most viewed television program in the history of American television. If every person who sees this Colgate ad pledges to stop running the tap while brushing their teeth, an estimated 300 billion gallons of water could be saved this year. This would then result in a cosmic shift in the time-space continuum that would change the course of history. (OK, that might be taking things too far but it would be huge step in the right direction.) Because, as the ad says, "#EveryDropCounts."

Below is Colgate's "Save Water" ad. Be prepared to be a tab flabbergasted at how a simple action is impacting our world.

And, even more impressive, Colgate is putting their money where it's mouth is. Not only are they paying those super hefty Super Bowl ad costs to spread their message, but they have also pledged to decrease their corporate consumption of water by 40 percent. It would appear that Colgate is also turning off the tap. You go, Colgate.

You can pledge to turn off the tap at Colgate's website. I already have, because #EveryDropCounts!