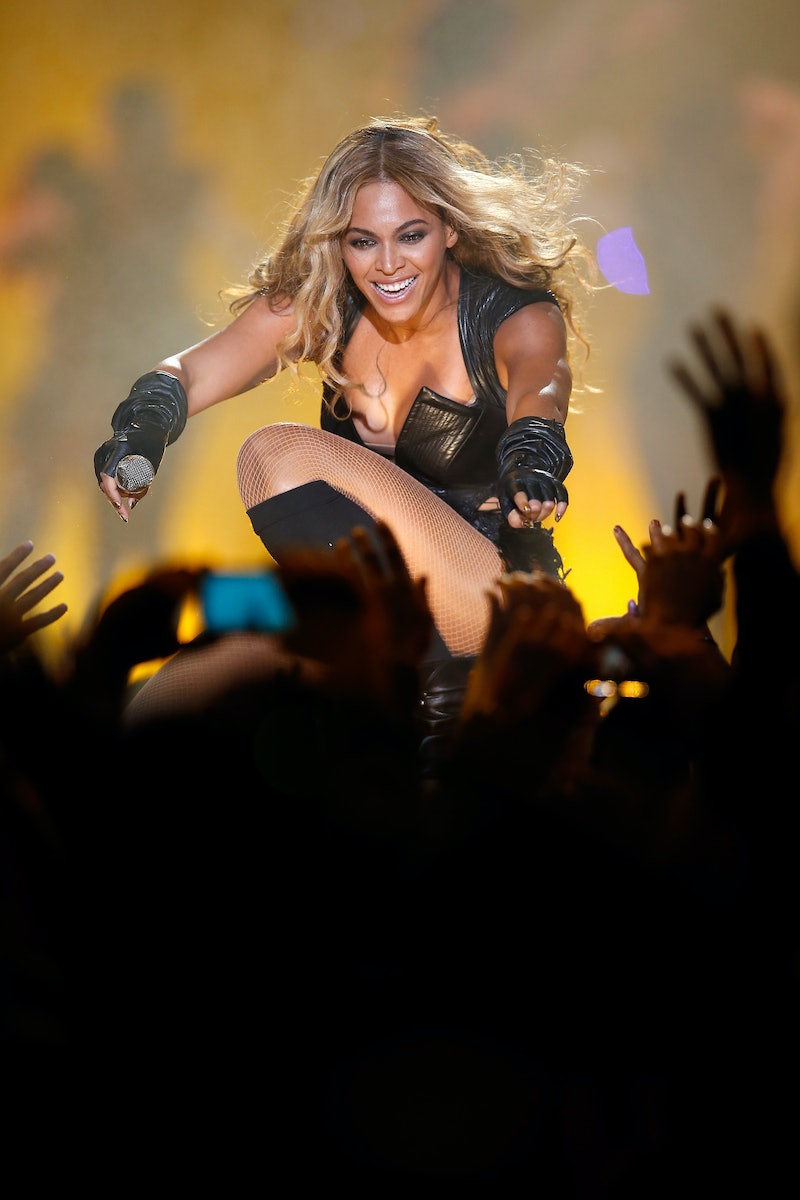 If you're the kind of person who doesn't care about, shall we say, the athletic aspect of the Super Bowl, you're probably more interested in the fact that Coldplay, Beyoncé, and Bruno Mars are performing the Super Bowl 50 halftime show. And, if this is the case, the question has likely crossed your mind by now: Will Beyoncé lip sync the halftime show during her confirmed appearance with Coldplay?

Well, of course, there’s no definitive way to figure it out until Sunday's performance — but, however, if I had to wager, I'd put my money on no.

I'm eager to say that's not a very Beyoncé thing to do. Yes, I realize this is the woman who, despite her talent, admitted to lip-syncing during the national anthem at President Obama's 2013 inauguration on the United States Capitol building steps. But, this is also the same Beyoncé who owned up to it by surprising a room of reporters at a pre-Super Bowl press conference weeks after with a live rendition of the National Anthem, and followed it up with, "Any questions?" ...Which is perhaps the most basadd Beyoncé thing to do of all. Mostly, though, the reason I'm inclined to believe Beyonce will sing live is because a second lip synching debacle could prove catastrophic for her career.

Here are the facts: The only time Beyoncé has actually owned up to lip syncing was during the 2013 inauguration, likely because doing so was the only way to put the matter to rest and save herself from further public scrutiny. When asked by the Associated Press about inauguration-gate during that same press conference, she responded:

"I am a perfectionist. One thing about me: I practice until my feet bleed and I did not have time to rehearse with the orchestra. It was a live television show, and a very, very important emotional show for me, one of my proudest moments. And due to the weather, due to the delay, due to no proper sound check, I did not feel comfortable taking a risk. It was about the president and the inauguration, and I wanted to make him and my country proud, so I decided to sing along with my pre-recorded track, which is very common in the music industry. And I'm very proud of my performance."

Because all of the impediments to a live show, from rehearsal time to weather, have been removed, Beyoncé has no apparent reason to lip sync. (Unless she's sick right now. Beyoncé, please don't be sick right now!) The last time she performed at the Super Bowl in 2013, she definitely sang live, and she delivered. (Billboard, for one, counts it among the greatest halftime performances of all time.)

Furthermore, Coldplay will likely be singing live, and since her performance is technically with them, I'm putting my money on live for her as well.

Now... can we put this debate to rest once and for all, and listen to Bey's new song "Formation" for the 100th time?

More like this
Prince William Reveals Charlotte's Hidden Talent In Ultimate Proud Dad Moment
By El Hunt
Taylor Swift's “Carolina” Theme For 'Where The Crawdads Sing' Soundtrack Is Here
By Jake Viswanath
What Is Elvis Presley’s Net Worth? How The King Earned & Spent His Fortune
By Grace Wehniainen
Big Freedia Reveals The Real Meaning Of Beyoncé’s “Break My Soul”
By Radhika Menon
Get Even More From Bustle — Sign Up For The Newsletter