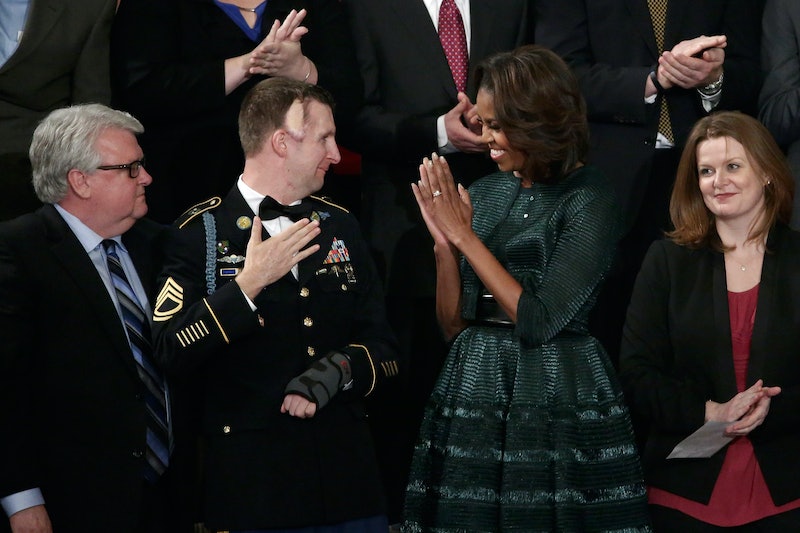 Michelle Obama's sartorial choices for big events are high on the list of reasons to love her. After all, it has been decades since we've had a female political figure embrace high fashion to a similar extent. At Tuesday's State of the Union address, Obama sported an emerald green dress by Paris-based label Azzedine Alaïa.

According to WSJ, the dress features a full knee-length skirt that flares out from a cinched waist done up in shimmery dark green. Obama wore a matching green jacket over her famous upper-arms and accessorized with a black belt and tights, cutting a conservative-yet-elegant figure. She previously wore this ensemble in December of 2012, when she escorted Barbara Walters on a tour of the White House for ABC News.

Although a stylistically innocent choice, the Alaïa dress is causing controversy since it was not designed by an American label. But this isn't the first time the First Lady has come under fire for wearing non-American designers to public events. In 2011, Oscar de la Renta criticized Obama for her decision to wear U,K. label Alexander McQueen to a state dinner with China. Alaïa came to her defense in a harsh statement made to WWD:

It’s not up to him to give her lessons; Michelle Obama is of her time; Oscar de la Renta is no longer.

Obama has famously supported many up-and-coming American designers, skyrocketing the careers of now big names like Jason Wu and Tracy Reese, and proudly showing her support for lower-priced labels J. Crew, Talbots, and White House/Black Market. Clearly, she's not favoring European labels over American ones, so what's the big deal? Alaïa is clearly working for her. In fact, she's worn the designer many times before:

At the Obama family's first meeting with Queen Elizabeth II in April of 2009, the First Lady wore a white blouse and black skirt by Isabel Toledo paired with a black Alaïa cardigan and a string of pearls. The look was perfect in its simplicity.

This black knitted dress was MObama's choice for the NATO dinner, also in the Spring of 2009. The body-hugging top flares gently out at the hip, a signature silhouette for Alaïa that creates a figure-flattering shape. And, of course, those arms are highlighted beautifully here.

The studded Alaïa belt Obama wears to cinch the waist of her bright yellow Jason Wu dress adds some necessary edge to such a sunny shade.

The First Lady originally wore this regal plum colored frock for a television broadcast with Oprah in 2009, but it looks just as fresh here with its long sleeves, a deep v-neckline, and a flouncy skirt.

Our verdict: MObama looks good in Alaïa; the designer's figure-flattering silhouettes highlight her muscular arms and torso to great effect. As for the State of the Union dress, it was perfectly in line with the First Lady's best sartorial decisions. Get on with your designer self.