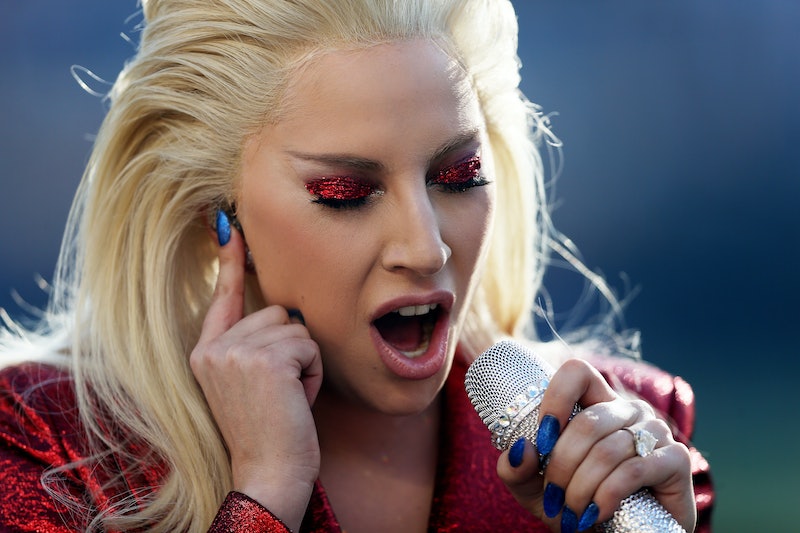 To kick off what might be the most star-studded event in football history, Lady Gaga sang the National Anthem at Super Bowl 50 wearing a custom, red, sequin Gucci pantsuit, patriotic makeup, and a fabulous half up 'do. Dang, what a way it was to start the show. Lady Gaga showed up in extremely on-theme crimson sequins, straying from many of the past National Anthem outfit trends, which tend to be much more conservative than the all-out halftime show costumes. Before the sporting event on Sunday she teased us via Snapchat with a sneak peek at some custom red, white, and blue Gucci heels and some serious navy and crimson eye makeup, so it was clear early on that Gaga planned on going full literal U-S-A for her performance.

Lady Gaga joins a long line of kick-ass female singers who performed their own renditions of "The Star Spangled Banner" before the big show. Last year, Broadway darling Idina Menzel took to the stage, and before her we had Kelly Clarkson, the Dixie Chicks, Whitney Houston, and, of course, Beyoncé — just to name a few. And this is only the start of Gaga's appearances for 2016: We'll likely be seeing even more of her (and her incredible outfits) at the Grammys and Oscars later in February.

I mean, can you even?

Let's get a closer look at those sequins.