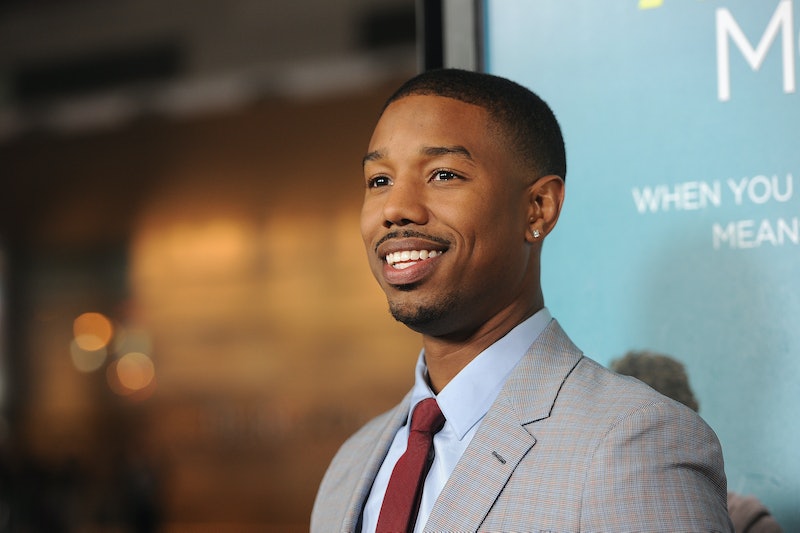 Has anyone else seen the That Awkward Moment trailer where Michael B. Jordan's character shows his privates to his best friends and it's really weird because that would never happen in real life? Well, it did happen in real life. Kind of. Michael B. Jordan flashed Zac Efron and Miles Teller in that very scene while they were expecting he would have on a "modesty sock."

To explain for anyone who hasn't seen the preview, Jordan's character comes out of the bathroom with a towel around himself and announces to his friends (played by Efron and Teller) that what he thought was lotion was actually self-tanner and now his junk is orange. They then joke that his manhood looks like a giraffe. It's really weird for so many reasons. For one, dudes don't just show each other their penises and I confirmed this with a guy. Two, way to just announce to them that you either were about to masturbate or that you put lotion on your wiener, both of which are totally unreasonable to tell you friends. Three, the friends are totally fine with staring at it and making up insults. I thought it was just a stupid thing in a movie, but now it's brought to mind all over again because Jordan admitted to going sans peen cover.

Jordan told Us Weekly that he thought it would be funny to take the movie's title to heart and play a joke on Efron and Teller. "I said, 'Fuck it. Why not make it awkward on them? I was fine! I was completely comfortable." Teller gave his side of the story saying, "You know, Michael B. is very comfortable walking around on set naked. It's a lot to deal with when you've just met a guy, but, yes, he enjoys taking his pants off."

This actually is a funny joke. Imagine Teller and Efron sitting there expecting to see what is essentially tiny undies when Jordan opens his towel revealing all and they still having to go forward with performing the scene. This prank makes sense. That scene itself still really doesn't.