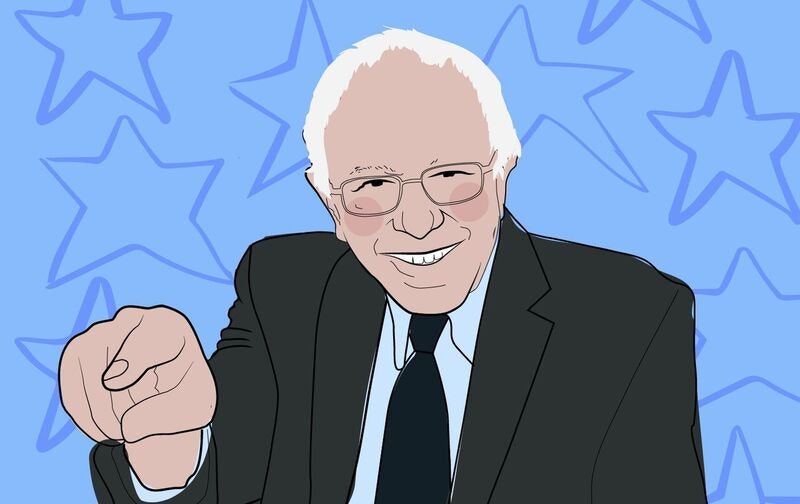 After last week's CNN's Democratic Town Hall on Wednesday and MSNBC's late-announced Democratic debate on Thursday, the media seemed to fixate on one particular issue: Bernie Sanders' attack on Hillary Clinton's Wall Street ties. Outlets ranging from The New York Times to The Wall Street Journal to Infowars all jumped to cover and condemn Clinton's corporate alliances. Even though Clinton claimed that Sanders' attacks on her campaign funding sources were an "artful smear" during the New Hampshire debate, highlighting the former Secretary of State's connections to "Corporate America" has been key to Sanders' campaign. And now that Sanders has managed to leave Iowa in a "virtual tie" with Clinton, and now that the public realizes Sanders is no longer the "political underdog" he was once labeled as, it's time to examine how his grassroots funding has been the (relatively) unsung hero of his presidential campaign.

While pundits and analysts marvel at how Sanders has become a formidable challenge to Clinton — a prospect once-believed to be all but impossible — and speculate why millennials are flocking to him, perhaps his style of fundraising should receive more credit. Sanders' grassroots campaigning is not only responsible for bankrolling his White House attempt, but building his base of supporters. The surge in popularity for the self-proclaimed "Democratic socialist" can be traced back to his fiscal practices.

Racking up small, individual donations has been key to Sanders' funding and support from the get-go. Natalie Andrews at The Wall Street Journal reported that on Sept. 30, 2015 — the last day for third quarter campaign finance filing — the Sanders campaign asked that supporters contribute $24.86, which was the average donation received the prior week. The campaign also issued a donation plea via Facebook: "This deadline is an opportunity to send a powerful message to the political media and the super PACs attacking us about the strength of our campaign. Let's make sure they hear us loud and clear."

At 11:30 a.m. that day, Sanders' campaign announced that it had reached its goal of a million individual online contributions. Sanders was the first candidate of the 2016 presidential campaign to announce he had reached this number — and he reached it faster than Barack Obama did in 2008 and 2012. In hindsight, this announcement was one of the first clues forecasting Sanders nearly "neck-and-neck" status with Clinton in Iowa — and the senator's grassroots support network was the force that got him there.

More of this collective loyalty came to light on Jan. 2, when Sanders' campaign reported raising more than $33 million in the final three months of 2015 — nearly matching front-runner Hillary Clinton's fundraising haul over the same period. Again, more than a million people donated to the Vermont senator's efforts, this time contributing with an average of about $27 per person, according to the campaign. The Wall Street Journal reported that, unsurprisingly, only a fraction of Sanders' donors gave the maximum contribution of $2,700 set forth by the Federal Election Commission (FEC), which means that the senator can go back his supporters and ask for more money as the primary season continues.

After the third Democratic debate in October, Sanders broke presidential fundraising records for individual donations, nabbing more than 2.3 million donors and further proving that "people-powered" campaign was not only paying the bills but increasing his popularity. Moreover, providing evidence that he relies on small donations has only solidified Sanders' status as the unsullied corporate outsider, the politician who won't be bought — and it certainly seems to be appealing to a wide swath of Democrats, including millennials, who some assumed would go for Clinton in droves.

Dr. Michael Malbin, the Executive Director of the Campaign Finance Institute in Washington D.C., expounded on Sanders' financing success, telling Bustle that, "Sen. Sanders' fundraising shows that it is possible to raise a lot of money from small donors — enough to fund a serious campaign for the most expensive elections in the U.S." Malbin added that Sanders' campaign style was not unprecedented, borrowing from previous Democratic and Republican candidates' strategies: "He is building on the success of Barack Obama and Howard Dean, and before that of Ronald Reagan and John McCain."

While Sanders' small-sum donation bounty is impressive, he's also being financially backed by larger associations — which has drawn controversy. Sanders often touts his refusal to accept money from super PACs. During Thursday night's Democratic debate, Sanders reiterated a variation on a line he's stated many-a-time on the campaign trail: "I'm the only candidate up here who doesn't have a super PAC."

Sanders has received some criticism for his no super PAC claim because, simply, it's not accurate. A pro-Sanders super PAC does exist — and it's managed to pump more than $1 million into advertising and other outreach efforts to back the senator. It's a union-affiliated group, National Nurses United for Patient Protection.

National Nurses United (NNU) operates completely independently of the Sanders campaign — as it must per the 2010 Citizens United Supreme Court ruling. However, it's not always clear that super PACs run so vigilantly separately from their respective candidates. Sanders maintains that, unlike some candidates' super PACs, his operates completely independently.

"The difference is a pretty simple difference," Sanders told reporters, specifically calling out his Democratic rival. "Hillary Clinton goes out raising money for her own super PAC. I don't have a super PAC."

Many media outlets have highlighted the problematic nature of Sanders' anti-super PAC stance, as he's clearly benefiting from one himself. But, NNU is raising funds for Sanders via their dues, not through "big money" contributions. In fact, in keeping with Sanders' staunch anti-establishment sentiments, NNU only accepts contributions from small donors.

The union's co-president, Jean Ross, told Bustle that it's foolish to compare NNU to a super PAC. "Super PACs represent the wealthy — those with a clear agenda who want certain measures passed through legislature, measures they'll benefit from. National Nurses United represents the people. We see people all the time falling ill from income inequality and from lack of healthcare. We see people dying from all that."

It should be noted that Sanders once had the opportunity to have his own ally-operated super PAC. Eric Lichtblau of The New York Times reported that Vermont legislator Chris Pearson offered to create a super PAC for the senator's campaign, but Sanders told Pearson to "kill it."

Still, unauthorized super PACs have sprung up in spite of Sanders' anti-super PAC stance. For example, last spring, the super PAC "Bet on Bernie 2016" formed and used the senator's image on an electronic billboard in Times Square — without his knowledge or permission. Another unauthorized Sanders super PAC — "The Americans Socially United PAC" — failed to disclose funds and disbursements last September and ran into trouble with the FEC.

Despite the controversy surrounding these unauthorized super PACs, Sanders has remained adamantly against big donors and sticking to his grassroots guns. And he is reaping the benefits.

No one is wondering whether grassroots funding will work. Now, everyone wants to know why it has worked for Sanders. A year ago, Sanders' support in Iowa was less than 7 percent, whereas Clinton enjoyed a 68 percent favorability at that same time.

Thanks to some nurses and lots of $25 donations, America is feeling the Bern.