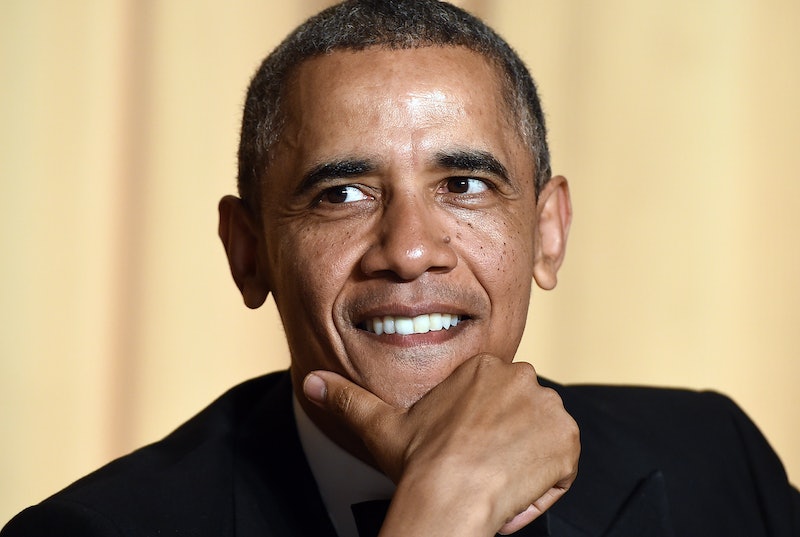 After Super Bowl 50, Stephen Colbert hosted a star-studded episode of his late-night talk show, and while all of the unexpected appearances were pretty good, President Obama's cameo on The Late Show was the best of them all. It was also the latest illustration of Obama's increasing propensity for comedic performances as his presidency nears its end.

The show's opening was based on the gimmick of Colbert tossing a football to unexpected recipients. First, he threw it some U.S. soldiers in Afghanistan. Then, he threw it to astronaut Scott Kelly, who caught the pigskin from his post aboard the International Space Station. At the risk of stating the obvious, these were pre-taped segments; Colbert didn't actually throw the football halfway across the earth, nor launch it into space.

After that, the ball landed in hands of Obama, who went on to perform a short sketch with Colbert. Obama said that he'd called the the Denver Broncos to congratulate them on their Super Bowl victory, and then admitted that he'd placed a bet on the game. When Colbert informed him that betting is illegal, Obama replied that "I'm president, I'll pardon myself."

When Colbert asked how Obama knew that the Broncos had won — this was a pre-taped segment, after all — Obama replied that "I'm the president," and joked that the Super Bowl winners for the next 50 years are written on the back of the U.S. Constitution. The spot concluded with Obama making an intentionally-pathetic throw of the ball, which was caught by an irritated Michelle Obama.

It wasn't the first time Obama teamed up with Colbert. Back in 2014, Obama made an appearance on The Colbert Report, where he hosted a one-time segment called "The Decree." More recently, Obama flexed his comedic chops by joking around with on Jerry Seinfeld on an episode of Comedians In Cars Getting Coffee.

Obama reminds you that even presidents can get in on a national pastime — and no, I'm not talking about Election 2016.

More like this
The David Beckham Qatar Controversy, Explained
By Sophie McEvoy
'Bridgerton' Just Showed Off A Major Hollywood Celebrity Cameo
By El Hunt
'Waterloo Road' Is Back, With More Than A Few Familiar Faces
By Sam Ramsden and Vivian Iroanya
Jamal Musiala Has The Cutest Nickname Based On A Disney Character
By Catharina Cheung
Get Even More From Bustle — Sign Up For The Newsletter