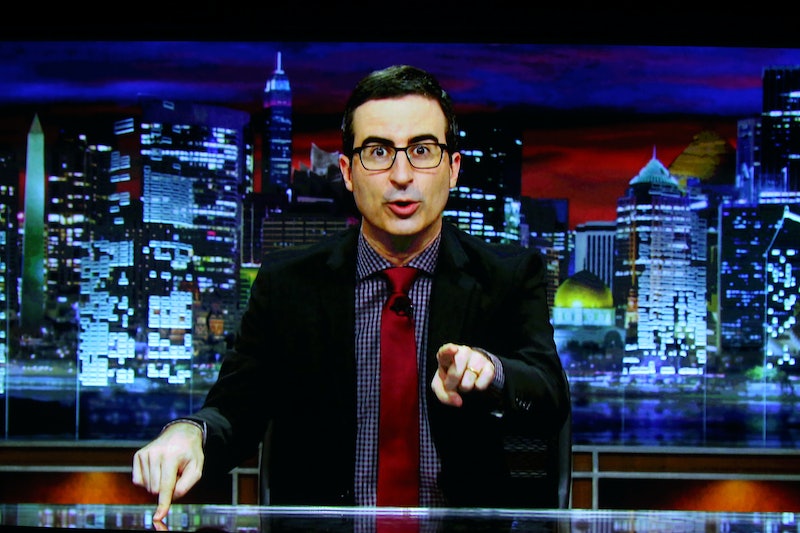 It's been a long few months without Last Week Tonight updating America on exactly what news to care about from the previous week (and eliciting uncontrollable laughter). Luckily, John Oliver will return to his desk Feb. 14 (yes, Valentine's Day) — despite popular demand, according to his self-deprecating website and advertising. You may think that the late-night host is just a performer, but Oliver's show has actually made a real impact in multiple ways, proving that late-night shows can actually make a difference.

Last Week Tonight is comedy at its core, but the show informs people about serious issues and encourages them to take real action. It's one thing to make jokes just to be funny, and an entirely different thing to make jokes to inspire social and political change. Oliver embodies the latter. The late-night star's impact has become so noticeable that it's been dubbed the "John Oliver effect." The show touches on all kinds of topics, and has made an impact in criminal justice reform, sports, the Internet, and women's empowerment initiatives.

Check out five times Oliver made a huge difference. Expect to see the list grow when season 3 of Last Week Tonight kicks off next week.

Net neutrality is a complicated issue to wrap one's head around, but it's essentially the idea that Internet providers shouldn't charge content providers to speed up the delivery of their content (a good example would be charging Netflix to stream its shows and movies faster). Oliver's deep love for the Internet made him vehemently oppose potential changes to the law that would have made the World Wide Web less of a democratically open space. In 2014, Oliver explained the problem in a way everyone could understand, and implored his fans to write to the Federal Communication Commission (FCC) and tell the agency that they support net neutrality. "Seize your moment, my lovely trolls," Oliver said. "Turn on caps lock and fly, my pretties!"

It worked. The FCC got more than 45,000 emails after the segment, causing its servers to crash. A few months later, the FCC adopted net neutrality regulations to protect free expression online.

Not afraid to tackle America's class issues, Oliver explained how current bail procedures keep poor Americans behind bars before they're even convicted of a crime, often coaxing them to plead guilty just to get out. "Jail can do for your actual life what being in a marching band can do for you social life," he joked. "Even if you're just in for a little while, it can destroy you."

Not long after, New York City Mayor Bill de Blasio announced a plan to alter the city's bail requirements for low-level offenders, allowing judges to release up to 3,000 defendants and place them under court supervision while they await trial. While de Blasio didn't credit Oliver for the inspiration, people couldn't help but notice that Oliver's segment got results in at least one city.

You may remember that several International Football Association (FIFA) officials were arrested in May on corruption charges. But Oliver called out the soccer organization's misconduct way earlier. The late-night star bashed the organization for its poor treatment of migrant workers and officials' sexist comments back in 2014, negatively comparing it to organized religion. When news broke of the arrests, Oliver said that FIFA president Sepp Blatter should resign. "To truly kill a snake, you must cut off its head — or, in this case, its asshole," Oliver quipped. Blatter did eventually step down, making Oliver and others outraged by the scandal very happy.

In 2014, Last Week Tonight took on for-profit colleges, covering how they are a large factor in America's ever-increasing student debt. He explained that schools like the University of Phoenix and ITT Educational Services account for a third of U.S. student loans, but only 13 percent of the total college population — an obviously skewed ratio. He bashed their quality, saying he wasn't sure whether their morals or the education they offer were worse.

The government began regulating for-profit colleges more strictly the following year. The Department of Education fined Corinthian Colleges $30 million for misrepresenting its job placement rates to current and prospective students, and the Securities and Exchange Commission charged ITT Educational Services with fraud for concealing the poor performance and financial impact of student loan programs that the school financially guaranteed to investors.

On Scholarships For Women

While challenging the Miss America pageant's claims that it gave out $45 million in scholarships each year, Oliver encouraged viewers to donate to organizations he believed were run more ethically and doing more to help female students — namely, the Society of Women Engineers. Just two days after Oliver championed the Chicago-based organization, which awards scholarships to women seeking degrees in engineering, technology, and computer science, it had received $25,000 in donations. The Society of Women Engineers acknowledged the spike in donations was because of the "John Oliver bounce."

There's no denying that Oliver holds a lot of power. I know who my Valentine will be this year.

More like this
24 History-Making Black Women You Probably Didn't Learn About In School
By Ayana Lage and JR Thorpe
25 Inspiring Quotes From Black Women To Celebrate Black History Month
By Kyli Rodriguez-Cayro and JR Thorpe
'Brookside' Is Coming Back & Soap Opera Fans Are Going Wild
By Sam Ramsden
6 Organizations Fighting Police Brutality That You Can Support Right Now
By Syeda Khaula Saad and JR Thorpe
Get Even More From Bustle — Sign Up For The Newsletter
From hair trends to relationship advice, our daily newsletter has everything you need to sound like a person who’s on TikTok, even if you aren’t.