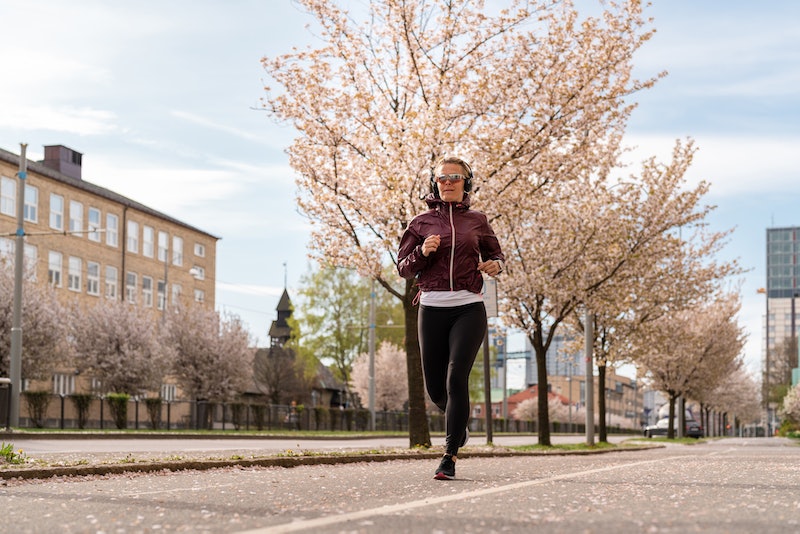 The old saying goes “An apple a day keeps the doctor away,” but, if we’re talking about simple measures we can take to improve our overall health, it might be more accurate to say “Two and a half hours of moderate aerobic activity per week keeps the doctor away.” (Somehow that’s not quite as catchy.) Whether you’re a diehard gym lover, someone who would rather chew off her own arm than go jogging, or you exist somewhere in between, you know that exercise is good for health: According to the Centers for Disease Control, regular exercise decreases your risk for cardiovascular disease, type 2 diabetes, metabolic syndrome, and even some cancers; gives you stronger bones and muscles; helps to maintain healthy weight; and even helps you live longer.

If major, but distant health benefits like “increased lifespan” and “being less likely to have a stroke” aren’t enough to motivate you to hit the gym or go for a hike (and, let’s be fair, when faced with the choices of “Go running” or “Stay here and not get sweaty and have fun watching TV instead,” it can be really hard to choose wisely), then exercise’s more unexpected benefits might be just the ticket for getting you up and moving. There is a whole host of problems that a bit of regular exercise can solve or help — problems that have a damaging affect, not only on your long-term health, but also on your day-to-day life. Keep reading for six problems that some good old physical activity might make better.

Regular exercise can do a lot to help alleviate anxiety and depression and improve mood overall. According to the Mayo Clinic, the reasons for this improvement isn’t totally understood, but scientists think that a few different things might be happening when we exercise to improve our moods and stress levels: Exercising causes our bodies to release “feel-good brain chemicals” like endorphins and endocannabinoids; it raises our body temperature, which eases stress; and it “reduc[es] immune system chemicals that can worsen depression.” Exercise also combats anxiety and depression in other ways; for example, it might be a good social outlet for people who feel isolated, or the act of setting and achieving exercise goals might be a confidence booster.

Regular exercise can help you fall asleep more easily and sleep longer and more deeply. And it makes sense, right? Sleeping tires out the body, but it also reduces stress, anxiety, and depression, all of which can contribute to sleeplessness. (Just be sure not to work out right before bed. Doing so might make you too excited to go to sleep.) However, if you suffer from chronic insomnia, the relationship between sleeping and exercise may be more complicated than that, though still ultimately beneficial. A 2010 study found that when a group of women diagnosed with insomnia began exercising regularly, they experienced significant improvements in their sleep by the four-month mark. But a 2013 analysis of this data showed that the improvement wasn’t immediate. The women didn’t experience improved sleep for the first two months of their workout regimens, and nights when they slept badly led to shorter workouts the next day, suggesting that, although the exercise didn’t seem to affect their insomnia, their insomnia did affect their workouts. But, after four months of working out, the women were getting at least 45 more minutes of sleep every night than they were before they started exercising, an improvement that one of the researchers told The New York Times was on par with other types of treatments, including medication.

The lesson? If you trying to help your insomnia with exercise, be patient. It might take a few months to see improvements, but you’ll be glad you waited when you’re finally sleeping better.

If your libido has been on the downslope lately, try working out — at worst, you’ll get some exercise, and, at best, your sex drive will ramp back up. There are a number of factors involved in exercise that might contribute to increased libido. According to Columbia University’s Ask Alice, exercise causes your brain to release endorphins (one of those “feel-good brain chemicals” mentioned above), which in turn can cause in influx of libido-boosting hormones. Furthermore, exercise improves circulation, which in turn increases blood flow into the genitals, which is a major contributor to sexual function and arousal.

Research has suggested a link between exercise and creativity. A 2013 study had subjects take creativity tests that measured divergent and convergent thinking (“Divergent thinking” refers to the ability to come up with many solutions to a problem, and “convergent thinking” refers to the ability to find a single solution to a problem). Test subjects who exercised regularly showed better creative thinking skills than their more sedentary counterparts. Cognitive psychologist Lorenza Colzato, who authored the study, explained, “Exercising on a regular basis may thus act as a cognitive enhancer promoting creativity in inexpensive and healthy ways.” Studies have also shown that exercise helps your brain in other ways. Exercising as a young adult can improve your cognitive performance in middle age, and exercising in middle age can lower your risk of dementia when you’re older.

Studies have shown that exercise can reduce cravings for nicotine, making it easier for smokers to give up their unhealthy habit. A 2012 study from Taiwan found that smokers who exercised were 55 percent more likely to stop smoking than those who didn’t exercise. Significantly, they were also 43 percent less likely than non-exercisers to return to smoking later. Research has also suggested that exercise may be beneficial for people struggling to give up alcohol dependency.

OK, so our appearances are all going to change as we get older, and that’s not a bad thing. In the grand scheme of problems one could have, “aging skin” is on the low end — it’s a natural part of being an adult, and our culture often prizes youth and youthful looks (especially for women) in a way that is unhealthy and often demeaning. THAT SAID, if a little vanity is enough to make us exercise, then why not? Exercise is hugely beneficial to general health, and if all of the other health benefits of working out just happen to come along with wrinkle reduction, then hooray for all of us, I say!

A small 2014 study found that, in test subjects over the age of 40, those who exercised regularly had much younger looking skin than those who did not exercise. The researchers also found that exercise could ­improve aging skin. They took skin samples from people over the age of 65, and then had those people exercise regularly for three months. Further skin samples revealed that their skin had improved dramatically over that time. More research is needed to fully flesh out (heh) how exercise may affect skin, but if it these results turn out to be an anomaly, and all I get out of exercising is better health, a lower risk of cancer, a better mood, increased libido, and a longer life, well, I’m not mad.

More like this
The Case For Tracking Your Heart Rate Instead Of Step Count
By Carolyn Steber
Lance Bass Says This Workout Machine Has Changed His Life
By Kaitlyn Wylde
6 Full-Body Tabata Workouts, Straight From Trainers
By Carolyn Steber
The Dead Bug Is The Ultimate Functional Core Exercise
By Carolyn Steber
Get Even More From Bustle — Sign Up For The Newsletter