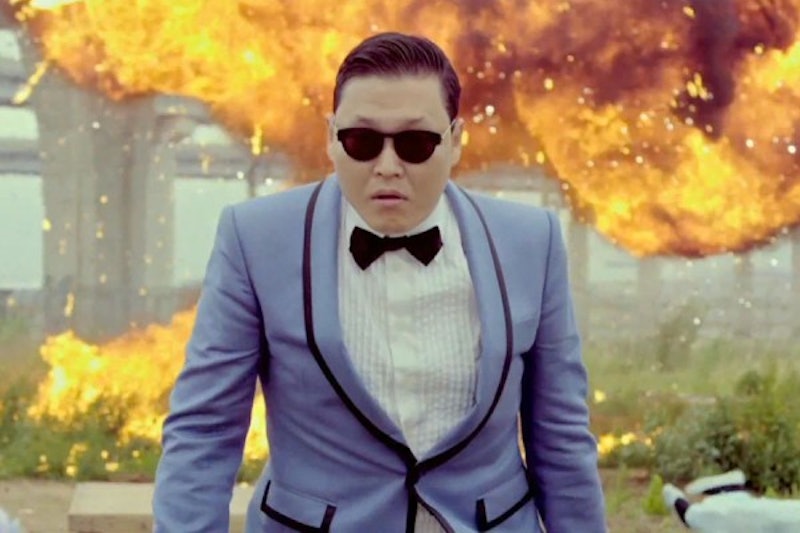 This Sunday will be the 11th anniversary of YouTube's launch, and it's kind of sobering to realize that I, at 27 years of age, remember a time before YouTube — a time when the only places to stream music videos were music channel websites, and if you missed a funny moment on a TV show, you just had to wait until it was on again. Today's teens would never.

The idea that YouTube was once a groundbreaking concept for a website may seem strange these days, when having the ability to jump online and search for pretty much every video ever is a completely normal and accepted part of life. But at the time of the site's launch, it was revolutionary in many ways. The ability to easily share videos you create at home with a global audience; the invention of the video meme; the real renaissance of professional vlogging; the rickroll — they all started on YouTube, or snowballed because of it. A lot of the ways that we now view TV, music, entertainment, and politics are heavily influenced by the concept of the YouTube soundbite. No wonder Google saw what was in the wind and bought YouTube in 2006.

A new wave of online video viewing may be coming (Tidal, you have a lot to live up to), but no matter what happens in the future, you can't deny that YouTube's had some pretty insane, culturally defining moments over the past 11 years. Here are 13 of the most memorable:

What It Featured: The Korean pop star Psy made people around the world immediately aware of the particular cultural cache of the Gangnam district of Seoul with his Korean-language anthem. Plus, the video's distinctive dance moves were basically impossible to forget.

What It Meant: Psy's phenomenally successful video (still, to this date, the most-watched YouTube video of all time) signaled several things. One was that getting billion-plus views on a single video was now possible; another was that the Asian viewing market was a serious force to be reckoned with. The success of this video was a real sign that YouTube had gone fully global.

What It Featured: Maru, an extremely gorgeous and silly cat, likes sitting in boxes, being brushed, and looking confused by various things.

What It Meant: Maru was one of the original YouTube stars, and likely one of the first animal video stars. This video was the birth of the "cat video" as we know it; Maru opened the door for people to use their pets to provide a lucrative income via home-televised cuteness.

What It Featured: A baby panda sneezing like a foghorn, a mother panda being immensely surprised. What's not to love?

What It Meant: When this video went viral in 2009, it was one of the first indicators that public taste regarding viral hits was completely unpredictable. The source was so unprepared for the success of the video that it didn't even identify which zoo or breeding program was being filmed.

What It Featured: A home video of Charlie, the fat-faced baby, biting an agitated older brother's finger with his baby teeth, then looking immensely pleased by the pain he's caused. Takeaway: Babies are adorable, yet evil.

What It Meant: In addition to showing the continuing appeal of watching siblings torment each other (it's still among the 20 highest-viewed YouTube clips of all time), the success of this video introduced the America's Home Videos potential of YouTube's format. Personal videos of amusing antics could be put online and used for profit? Cue stampede of personal funnies.

What It Featured: The unprepossessing-looking Susan Boyle, placed on national (and international) television and expected to bomb, instead delivers a flawless version of Les Miserables' "I Dreamed A Dream" and makes the hair on everybody's neck stand up.

What It Meant: This was likely the moment when TV talent shows around the world saw the true possibilities of viral marketing. Boyle's performance was a whopping success with international audiences, who were truly shocked when her feel-good story didn't go on to win the competition.

What It Featured: A beautiful girl croons about her sexual attraction to Barack Obama at the height of campaign fever before his first election.

What It Meant: This is likely the most successful political statement to ever hit YouTube. It summed up the fervor of the era perfectly, and particularly captured Obama's appeal to youth voters in the "Yes We Can" days. Savvy young Obama staffers likely punched the air when this one gained traction. (Obama's been a YouTube pro for ages; he's probably the only President ever who could say "Can I live?" on a Buzzfeed video and still enjoy standard presidential levels of respect.)

What It Featured: Matt, a blogger, did strange dances in the many places he visited around the world.

What It Meant: The "Where The Hell Is Matt" phenomenon marked the creation of something new: the job of professional YouTube entertainer. From his videos, Matt has made an entire career, including corporate sponsorship by Stride gum and a Kickstarter campaign for his next video.

What It Featured: Harry Potter characters, in the form of hand puppets, acted out short skits and performed ridiculous songs.

What It Meant: YouTube has been the home of fan-made homages to beloved cultural properties basically since it started. (Fan-made trailers are now occasionally used by real directors, because they are sometimes that bloody awesome.) But the Potter Puppet Pals are some of the most surreal and successful fan videos ever made. They're also catchy as hell.

What It Featured: A young girl talks to the camera about life, TV, angst, and various other teenage issues.

What It Meant: Welcome to the era of YouTube trickery. LonelyGirl15 became a blogging sensation as exponential amounts of viewers tuned in for her stories; when she was revealed to be a character created by an actor and a production team, the publicity (and outcry) was massive. It was the first real instance of a YouTube "scandal," where a blogger's authenticity turned out to be non-existent. The controversy did nothing to dampen enthusiasm for LonelyGirl15's videos, but it also introduced a bit of well-needed skepticism to viewers of the entire medium.

What It Featured: An utterly surreal animated short by animator Pendleton Ward, in which Finn the boy and Jake the talking dog rescue princesses from evil Ice Kings, have dance breaks, and make puns about quadrilaterals.

What It Meant: Adventure Time was only meant to be a short; a full-length series based on the bizarre cartoon was rejected twice by Nicktoons. But its enormous viral success meant that Pendleton Ward got the clout he needed to pitch it successfully, and it's gone on to be a ratings winner. (Hence why the pilot has been pulled from YouTube, and you can now only see it via reviewers.) YouTube viewers as decision-makers about content: 10 points.

What It Featured: A man wandered Pitt St Mall, one of the busiest shopping areas in Sydney, Australia, holding a Free Hugs sign while a deeply emo song played. People claimed the hugs! Triumph!

What It Meant: We now see feel-good content and social campaigning on YouTube all the time, but this was the first to really combine the two in a way that went wholly viral. It was a simple concept, and worldwide Free Hugs campaigns sprang up in earnest. (Everybody who was in a mall in the mid-2000s will remember them well.) This sort of approach was used again with Kony 2012, a video devoted to mobilizing YouTube viewers to stop Joseph Kony, a Ugandan guerrilla leader who had been indicted for war crimes by the International Criminal Court in the Hague but evaded capture. But that ended badly, with the campaign in shambles and the creator of the campaign becoming so stressed and exhausted that he suffered a public breakdown.

What It Featured: Michelle Phan, who'd go on to become one of the most-watched women on YouTube due to her make-up tutorials, started her channel with a "natural look" lesson in 2007.

What It Meant: Phan was one of the earliest adopters of the idea of YouTube-as-classroom, and has since gone on to be wildly successful, with a line of cosmetics and a book under her belt. Beauty blogging and other kinds of expert tutorial videos — where people teach you to do everything from use contouring makeup to defeating a game level to changing a tire — are hugely popular, and popular channels can generate truly phenomenal amounts of money. (One British beauty blogger, Zoella, is estimated to earn nearly $450,000 a year from her channel.)

What It Featured: Columnist Dan Savage made a video with his partner, Terry Miller, to assure LGBT youth who were struggling with discrimination and suicidal thoughts that committing suicide would deprive them of a much better future. The concept was so popular it became an entire campaign, the It Gets Better Project, a series of videos where LGBT adults shared how their futures had improved despite despairing periods.

What It Meant: "It Gets Better" was one of the most powerful social movements of the 2010s, and it was born entirely on YouTube. The "It Gets Better" campaign shone light on the high suicide rates among LGBT youth just as LGBT issues were gaining the political spotlight in the United States, and has improved visibility and made serious personal differences to sexual minorities around the world. Doesn't get much bigger or more significant than that.