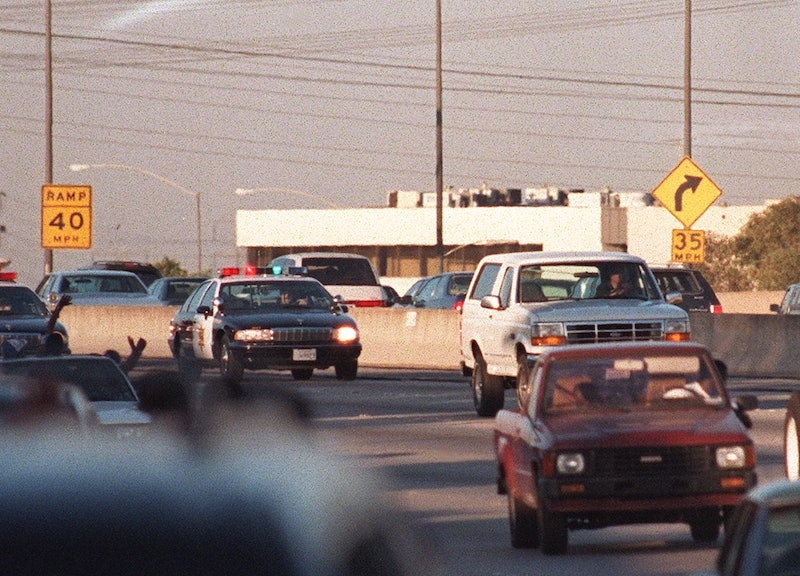 The O.J. Simpson trial has woven itself into the fabric of popular culture so deeply, it's hard to imagine what the world would be like if it hadn't happened. Some millennials may not have a strong memory of the trial, when Simpson was charged with and then found not guilty of the murders of Nicole Brown Simpson and Ronald Goldman, but for a generation of people, there was nothing more shocking than seeing beloved actor and football player O.J. Simpson embark on a low-speed car chase with the police following his failure to turn himself in for arrest. Whether you remember watching the events unfold in 1995 or not, seeing videos of Simpson's Bronco chase will remind you of the media frenzy that enveloped his case from beginning to end.

The Bronco chase is without a doubt the most famous car chase of all time. So much so that the phrase "White Bronco," when googled, immediately brings up news stories about Simpson. The chase has been the subject of documentaries and parodies, despite the fact that outside of the context of Simpson, the car chase itself is actually pretty unexciting. It's a car being followed by the police on a nearly empty freeway. That fact that it was Simpson in the car is what made 95 million people tune in to watch it unfold.

One reporter said, while covering the chase, "There's no rulebook on this because ... it hasn't happened." The news footage of the case shows just how little was known at the time. The coverage is prone to long periods of silence, followed by outbursts of new updates and anchors stumbling with their words as they try to make sense of the situation. All that anyone knew was that a beloved media figure whose ex-wife had just been murdered was being chased by police at low speeds.

Sgt. Jim Sewell, who was a sheriff for Orange County at the time, told NBC News, "I've seen sad stuff, weird stuff, but as far as the totality of the weirdness — [The O.J. Chase] was it. It was routine occurrence in law enforcement that involved a celebrity, was televised, and everybody wanted to be a part of it. And the byproduct is the fascination with pursuits that we have now."

The Bronco chase may have served as the most effective television pilot of all time, as over the next year, people tuned in for updates on the case, culminating in a "finale" of sorts as Simpson's verdict was read — an event that was witnessed by as many as 150 million people. In the time between the chase and the verdict, the entire television landscape changed, as did the way people viewed celebrities, the criminal justice system, and the ways that racial differences affect modern America. The chase had a massive impact on television and media, and it's likely nothing like that will every happen again. The best way to know what it was like is to watch the hour-long pursuit, is to watch it for yourself.