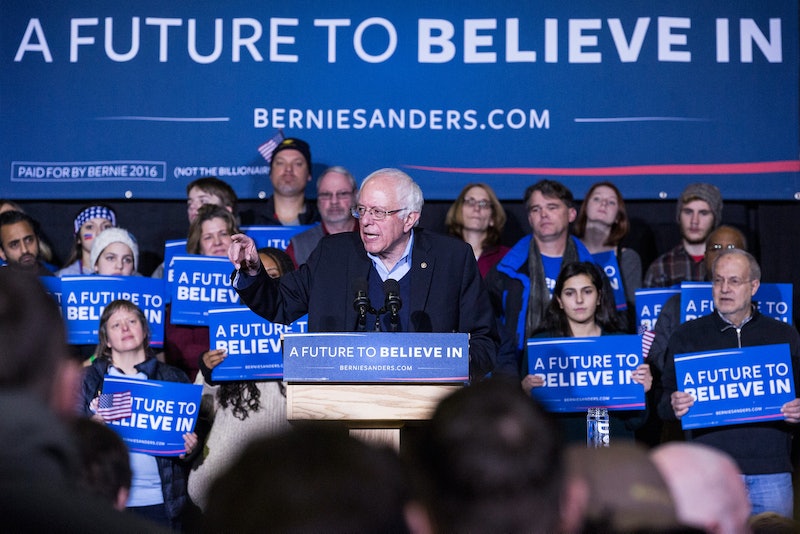 There is little doubt that Sen. Bernie Sanders will win the New Hampshire primary on Tuesday. Coming off a near-upset in Iowa, where Sanders lost by a mere 0.29 percent in the caucuses on Feb. 1, the campaign expects to keep the momentum going with a victory in the first primary election of the 2016 presidential race. Poll numbers for Sanders in New Hampshire began spiking somewhat consistently in January, and he maintains an average 12.8 percent lead over Sec. Hillary Clinton in the state, according to RealClearPolitics. What will a win on Tuesday mean for Sanders?

First, let's talk delegates. New Hampshire has 24 delegates at stake for Democratic candidates, along with eight superdelegates, reported U.S. News & World Report. The superdelegates can back whichever candidate they wish, as they aren't bound to vote according to the results of the primary. The 24 regular delegates are awarded proportionally, meaning that each candidate gets awarded a number of delegates proportionate to the percentage of people who vote for him or her in the primary. Of course, it's impossible to know how many delegates each candidate will land until votes are in, but we can make an educated guess rooted in the context of recent poll results. Sanders' 12.8 percent lead in the state could translate to between 14 and 16 delegates, leaving eight to 10 for Clinton.

A couple things to note here: First, Clinton likely has the superdelegate advantage. Six of New Hampshire's eight superdelegates have already expressed support for Clinton, according to WCAX, though they could still change their minds before the Democratic National Convention in July. Also, a candidate needs 2,382 delegates to win the Democratic nomination for president, so we're talking about some pretty small potatoes up for grabs in New Hampshire.

However, New Hampshire isn't only important for delegates; it's important for exposure. A big win in New Hampshire could result in more media coverage for Sanders, and could encourage voters who haven't taken him seriously to start doing so. This will be particularly important as his campaign heads to Nevada and South Carolina on Feb. 20 and 27, respectively, where his poll numbers are weak. A boost in New Hampshire will be even more important for Super Tuesday on March 1, when 11 states will be holding their contests for the Democratic nomination.

The New Hampshire primary is crucial for the Sanders campaign, which will likely need a big win to set the stage for future victories in the race. Primary results should be in by Tuesday night, so we'll soon see if he pulls it off.