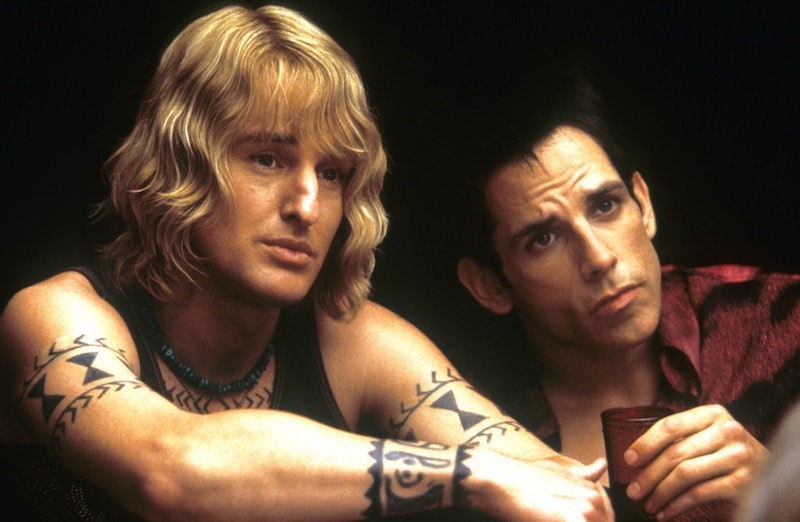 15 years after its release, Zoolander is remembered by many as a ridiculous and harmless comedy, known for jokes like the Derek Zoolander Center For Kids Who Can't Read Good and David Bowie's epic cameo as a walk-off commissioner. Yet at the time of its debut in Sept. 2001, Zoolander was best known as a hugely controversial film, thanks to the terrorist events that occurred earlier that month. The Ben Stiller vehicle was released to movie houses on Sept. 28, just a few weeks after 9/11, and since the crux of the film's plot was an international scheme to assassinate a world leader, the timing was less than ideal, to say the least.

Seeing that in the years since, the movie has bounced back from the unfortunate associations created by the short window of time between the tragedy and its release and has become something of a cult classic, it's easy to forget that upon its release, Zoolander's earning potential was all but ruined. The film premiered at a paltry $15 million (on a $28 million budget), despite being shown on over 2500 screens, and while it eventually grossed just over $45 million in the United States, it failed to live up to the expectations of many, a fact that can be largely attributed to its too-relevant plot

The effect of the film's unfortunately timed and contextually aggressive central storyline wasn't just felt in its bottom line, either. Many critics panned it, some in a manner that now seems exaggerated, but made some sense considering the landscape of the time. Late Chicago Sun-Times reviewer Roger Ebert wrote a particularly scathing review, suggesting that movies like Zoolander are some of the reasons "why the United States is so hated in some parts of the world;" at a 2013 Tribeca Film Festival panel, Stiller recalled how Ebert had eventually apologized, crediting his criticisms to the fact that "everything was a little crazy [back then]. It was Sep. 11 and I went overboard."

Time has passed, and today, Zoolander is considered a cult classic that's found enough success and a big enough audience to warrant a sequel, the upcoming Zoolander 2. And while it's not alone in its long game — plenty of cult comic classics failed to impress in their theatrical releases but went on to healthy lives on DVD and streaming — it is unique in its particularly bad timing upon initial release. Still, it's hard to be sad that the movie didn't find immediate popularity, as over time, Zoolander's catchphrases and scenes have become a part of countless people's vocabularies. Perhaps it's even become beneficial that the movie came out when it did; in a recent piece in Forbes, Scott Mendelson suggested that, from this historical vantage point, Zoolander is "a defining 9/11 film... in terms of the story it told, it was in-fact an explicit examination of the kind of willful ignorance that we attempted to examine in the aftermath of the attacks."

And maybe it's the kind of feel-good movie people need in the face of tragedy. In spite of the misleadingly violent plot, Zoolander is good-hearted at its core. Derek and his friends foil the plan to kill the Prime Minister, and the assassination plan itself is treated as the very worst extreme that a materialistic culture can be taken to. In the end, Derek learns that there is more to life than being really, really, ridiculously good looking, and it's impossible to finish the movie without a huge smile on your face. So while yes, its Sept. '01 release may have hurt Zoolander at the time of its debut, its success in the years since have proven that its poor timing has been deservedly overshadowed by the enjoyment millions of fans have while watching it, and the excitement people have for its upcoming sequel.