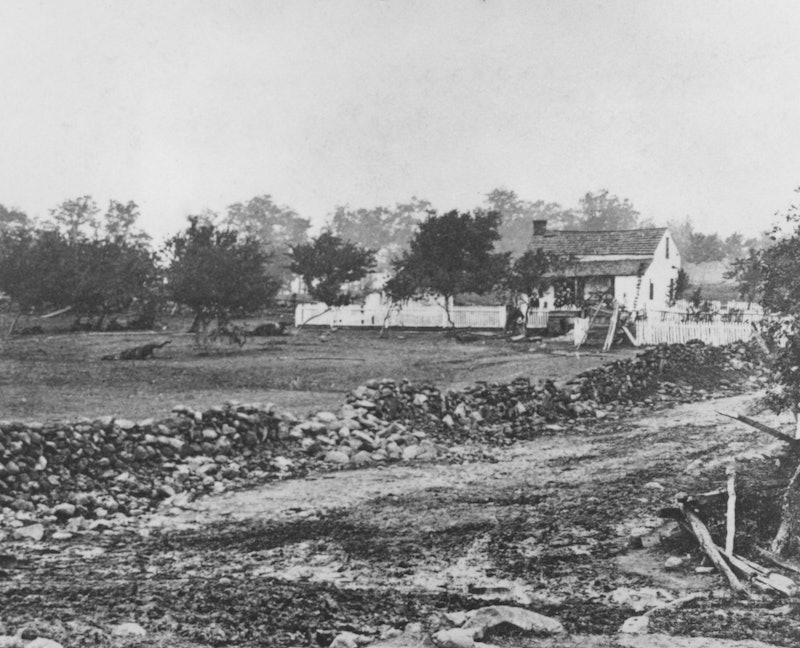 For anyone who has taken a history course, it seems that the Battle of Gettysburg is primarily contextualized by an event that followed it: the Gettysburg Address. President Abraham Lincoln's speech, given at the site where Union soldiers suffered their first major loss of the Civil War, has become one of the most famous addresses in all of U.S. history, with the notable "four score and seven years ago" line emblazoned into the American lexicon. But with Lincoln's 207th birthday this week, it seems only fair to honor the horrific event from which that speech was born. And these photos from the Battle of Gettysburg certainly bring the event to life beyond our history books.

Fought in early July of 1863, the battle took place between the Confederate and Union armies in Gettysburg, Pennsylvania. It created the largest number of causalities in the war and is seen as its turning point. After such a significant defeat, Lincoln used the events of the battle and his address to change the course of the war. The loss at Gettysburg opened up the dialogue surrounding black Americans' freedom, a concept Lincoln wanted to move beyond the Emancipation Proclamation and into the battle field. He now saw equality as something to be fought for on the ground.

Thus, it's important to remember not only the address, but the battle as well. These photos and drawings help bring those days into new light.

This 1884 color illustration depicts a wide view of the Battle of Gettysburg. During this turning point, it was ultimately Lee's defeat that caused him to break off his plans to further invade the North.

The battle took place over a period of three days. Despite this relatively short time, however, both sides lost men totaling near 6,000.

After an unsuccessful raid on the Union army, Lee led a retreat back to Virginia. The retreat also saw the death of many of his men.

This photograph shows some of the 24th Michigan Infantry. It was taken on the first day of the battle, which proved to be bloodier for the Union.

The three men shown in this photo are Confederate prisoners. The men, frequently depicted in history books, have never been identified.

This color image shows the importance of the horse during the Civil War. They were used as valuable instruments of war during this time.

This map shows key elements for both the Union and Confederate armies. It depicts field commanders' names, types of vegetation, drainage, roads, railroads, and nearby houses and names of residents.

This wide shot shows a good deal of the battlefield. The ridge in the background marked off the Union line of battle.

This was a trench dug for dead bodies after the first day of battle. About 620,000 men were lost during the Civil War, nearly half of all soldiers killed in every other U.S. war combined.

Shown here is Gen. Meade's headquarters. As the Commander for the Army of the Potomac, Meade was instrumental in defeating Lee during the battle.

This illustration shows at attack carried out by a Louisiana brigade called the Louisiana Tigers. They were known for being particularly ruthless in battle.

Little Round Top is depicted in this image. The rocky hill is considered by historians to have been the Union army's greatest defensive line during the battle.

There were 1,500 horses lost in the Battle of Gettysburg, with more than 1 million killed in the Civil War in total. At the beginning of the war, more horses were dying than soldiers.

In addition to being known for his defeat of Lee, Gen. Meade was also known for being characteristically hot-tempered. He often ran into trouble, even after the war, for his outbursts.

This photograph shows officers of the 3rd Infantry. Though they were instrumental in the Civil War, the regiment was eventually reduced in size and demoted to being Gen. Ulysses S. Grant's headquarters guards.

Though these images only offer a glimpse into the massive scope of the Civil War, they are important ones to remember. When honoring Lincoln's birthday, it's best to consider these photos with the hope that what they show they will never again be repeated.

More like this
The Families Of Grenfell Tower Are Still Waiting For Justice, Five Years On
By Bustle UK
How To Support Gun Control Reform Right Now
By Morgan Brinlee and Carolyn Steber
Eurovision 2023 *Might* Be Held In The UK
By Sam Ramsden and Rachel Mantock
17 Powerful Photos From March For Our Lives Protests Across The U.S.
By Michelle Toglia
Get Even More From Bustle — Sign Up For The Newsletter