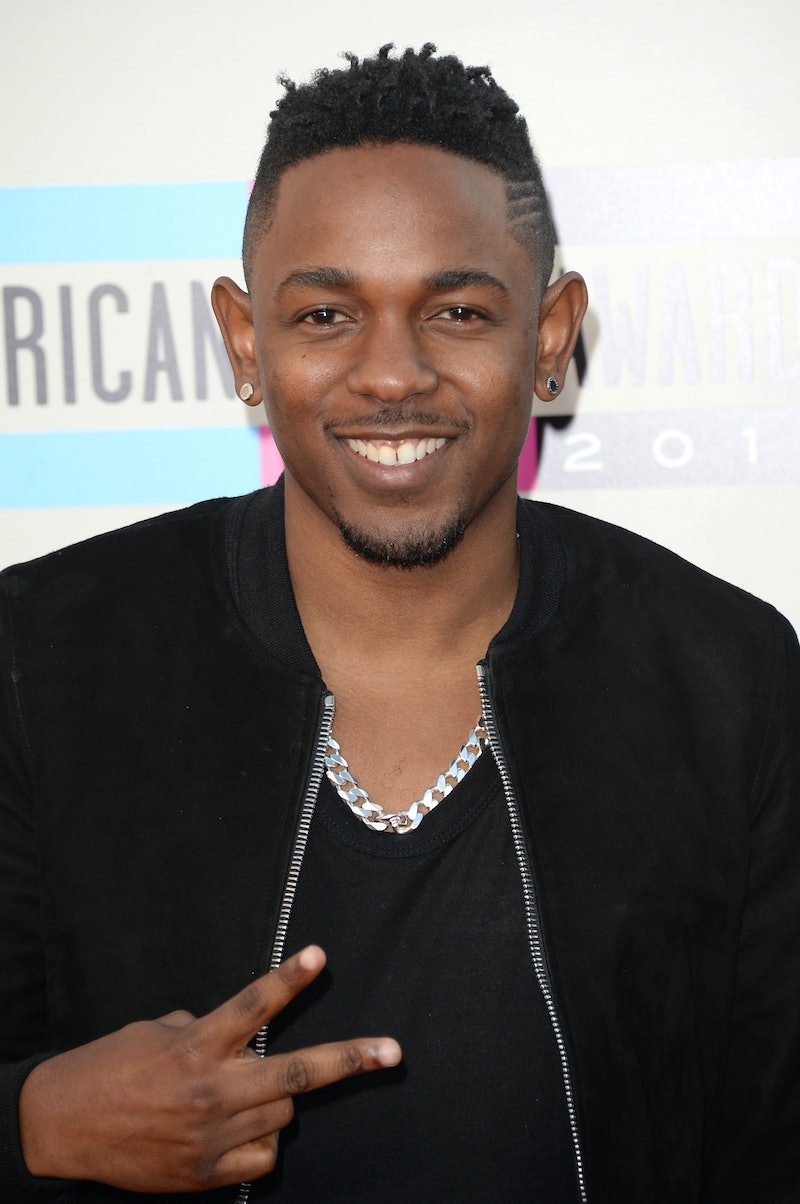 If you're not aware, the majority of the Internet and mankind was pretty pissed off this past Sunday when rapper Macklemore pretty much swept the Grammys, taking wins (primarily, the Best Rap Song award) away from one of the actual best artists of 2013, Kendrick Lamar. After the show, Macklemore apparently texted Kendrick Lamar to apologize for winning — which, I'm sure he thought was nice in theory, but seemed more like a stunt since he posted the entire thing on his Instagram — and, hopefully, win some support from those who hoped Lamar would win. While that may not have worked with Lamar fans, Lamar himself is, apparently, very gracious about the whole thing: In an interview with XXL, Kendrick Lamar said he's happy Macklemore won at the Grammys, because he deserved it. "It’s well deserved; he did what he did, man. He went out there and hustled and grinded. Everything happens for a reason; the universe comes back around, that's how it go."

Lamar also brought up some great points about rap music at the Grammys in the interview as well, which is even more important than his response to Macklemore. In the past, tons of rappers like Nas have been snubbed at the show, which is insane considering how legendary they are in the genre. "I definitely feel like they should always have more of the culture up in there, for sure, because we definitely stand out just like any other genre...We part of the world. We part of the movement. So I think any awards, including the Grammys, should always push for more hip-hop because it’s music as a whole, it’s not just splitting different regions. Everything moves as far as sound and vibrations, and that’s how it goes. And we are a part of that."

So true. Now, the only question that remains...now that Lamar has responded, will Macklemore Instagram this too?

More like this
Prince William Reveals Charlotte's Hidden Talent In Ultimate Proud Dad Moment
By El Hunt
Photos Of The 'Elvis' Cast vs. Their IRL Counterparts Will Have You All Shook Up
By Grace Wehniainen
Everything To Know About J-Hope From BTS’ Solo Album ‘Jack In The Box’
By Stephanie Topacio Long
Taylor Swift's “Carolina” Theme For 'Where The Crawdads Sing' Soundtrack Is Here
By Jake Viswanath
Get Even More From Bustle — Sign Up For The Newsletter