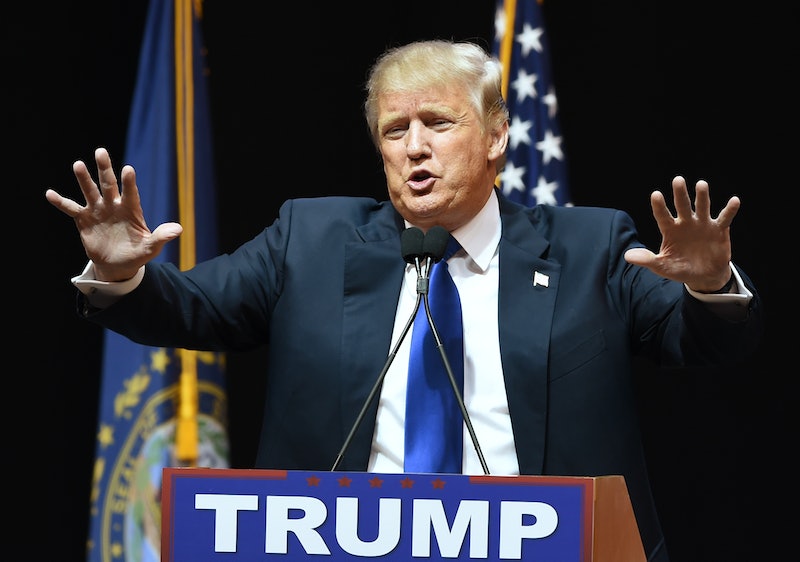 On the campaign trail in New Hampshire Monday night, Donald Trump called Ted Cruz a "pussy," hitting a new low that manages to insult Cruz, women, and gay and gender-nonconforming men all at once. That's a difficult feat, given how little Cruz's priorities and views align with those of women or LGBTQ people. While railing against the Texas senator for being "weak on waterboarding" — of all things — Trump was interrupted by a women who yelled out the insult from the crowd. What did he do then? He told her to speak louder. And when that didn't work, he repeated the insult for her.

Trump is evidently a big fan of torture, as he said during the Republican debate on Saturday, implying he would bring back "a hell of a lot worse than waterboarding." Well, Cruz (for once) is a bit more reasonable, which allows Trump to attack him from the right (or wherever "crazy and irresponsible" lies on the political spectrum). As Trump put it at his rally:

The other night in the debate, they asked Ted Cruz a serious question, 'What do you think of waterboarding? Is it OK?' I thought he’d say absolutely, and he didn’t. And he said, well, he’s concerned about the answer because some people ...

This is the moment where things got ugly. A woman yells out from the audience, "He's a pussy!" What did Trump do? Reprimand her? Admonish her? In anyway call her out? No, he made it all into a bigger joke, mocking the idea of political correctness. You really have to watch the video to see Trump's smug smile and faux sternness as he continued.

Shout it out, because I don’t want to say it.

OK, you’re not allowed to say that, and I never expect to hear that from you again.

She said — I never expect to hear that from you again! — she said: 'He's a pussy.' That's terrible.

The crowd starts to cheer, laugh, and applaud. Trump goes over some of the other times he's had people shout out offensive remarks from the crowd and how he has gotten flack for not correcting or denouncing them (like when someone called Obama a Muslim and "not even American"). Then he says sarcastically to the woman, "You're reprimanded, OK?" before asking the crowd if she could could stay. Of course "Yes" was their response.

After a certain point, it's hard to measure Trump's offensive comments against one another, but this one is pretty bad. For one thing, insulting another candidate in such a crude way shows little respect for the GOP, a U.S. senator, and the general idea of polite discourse. Just imagine if he were up against a Democrat (and a woman at that!).

There's no guarantee that he wouldn't call Vladimir Putin one. You can bet that wouldn't go over well. He would probably say even worse things to female foreign leaders like Angela Merkel, Dilma Rousseff, or — heck — even the Queen of England if America gave him the chance.

In such a case, if "pussy" is meant (as we know it is) as slang for a part of the female anatomy, things would get real offensive, real fast. There's another swear word much like it which I don't say — the "c-word" — but "pussy" might be worse. As Katie Baker wrote for Jezebel, the c-word is used to insult a woman who asserts herself, uses her power, and generally doesn't let men have their way. "Pussy," on the other hand, is used to describe someone who's showing weakness or femininity — and links the two qualities together.

And finally, for icing on the offensive cake, this is a regular insult for gay and gender-nonconforming men. I probably first heard it beginning in middle school, if not sooner. The idea that being feminine or displaying femininity is a weakness, a problem, or something to hide is not healthy for a society. If not being a "pussy" is a requirement to win the presidency, then god only knows when we'll have a gay candidate for president, let alone a feminine gay guy.

Words matter. After eight years with a president who films "It Gets Better" videos, signs equal pay legislation, and generally treats women and LGBTQ people like — oh, I don't know — people, a Trump candidacy is terrifying. History is not a one-way street of progress, and moments like this remind you to not be complacent.