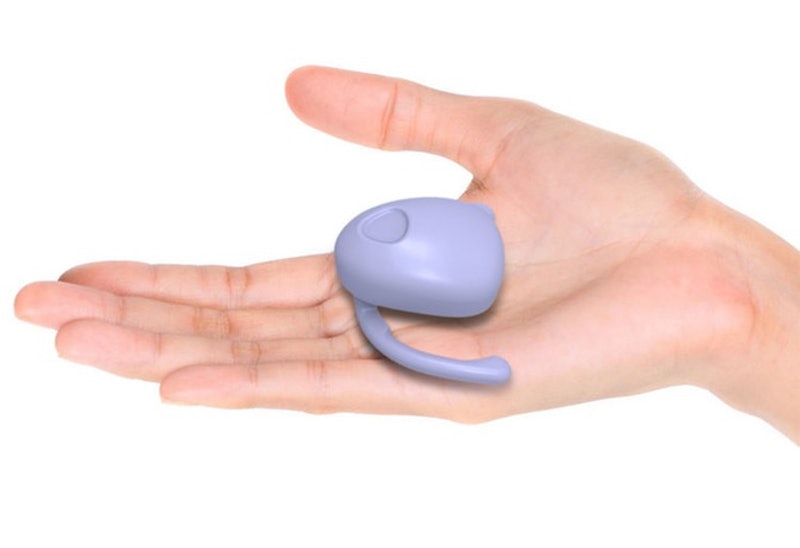 Sex toy innovation is truly on the rise, with everything from toys that thrust on their own to ones that let you f*ck a long-distance lover ... and have them feel it. One of the most exciting trends is the current focus on hands-free vibrators — because sometimes you want to have a good time, but you don't wanna put a ton of work in.

The market in this arena is truly soaring, which is great for all the vagina-owners who know that masturbation is truly a feminist act, one that we should do as often as we damned well please. As RuPaul says: “If you don’t love yourself, how the hell are you gonna love anybody else?”. I took these wise words and ran with them all the way to the sex shop for some solo play hands-free vibrators. To achieve prime relaxation while being pleasured, I tried the top hands-free toys for vaginas, and I’m here to tell you I had a hell of a time.

The Experience: I have to say, this toy did not disappoint. It definitely has movement of its own, and it keeps thrusting forward and didn’t fall out. Of the eight or so modes I tried (I mean I tried to count but it’s hard when you’re busy coming), they were all pretty jackhammer-y, which isn’t my favorite, but was pretty fun nonetheless. The external clit vibe had great vibration and the shape is delightful; it really covers your whole clit and upper labia region, which I like very much.

The Experience: While the Eva has many obvious couples play options, it’s also a great solo tool, if you want some clit stimulation and don’t want to have to hold onto anything. It did take me a few tries to get the vibe to stay put on me (which the instructions say is something that might happen) and I had to keep remembering not to squeeze my legs together as I started going (which is something I do when I’m getting turned on) because the little Eva arms would pop out of my labia. This is also another one that you need to be face up for, because gravity.

The Verdict: Once I got the hang of it, the little Eva did a great job, and with only three vibration functions! I definitely want to try it out with a partner to see if it stays in for some more vigorous movements and position changes.

I’ve been excited about the Ida for a while now — it was actually the first internal-external vibe I’d been introduced to that you can also wear while you’re being penetrated. (But that’s not relevant to right now, because today we’re focusing on solo pleasure.)

The Experience: When I turned it on before putting it inside me, I got extremely excited by the circular rotation of the internal part, which goes round and round just like I like fingers to. Unfortunately, it didn’t provide much pressure on my g-spot, and actually I could barely feel it inside me, although when I had it in my hand the vibrations were quite strong. I bet the combination of the Ida plus a cock will be delicious, but on its own the internal component was somewhat lacking.

The Verdict: I liked what this toy did to my clit but the internal component wasn’t as exciting in the moment as I thought it would be. I’m excited to check it out with a partner to see what it does when it’s being pushed against my g-spot, though. I like a lot of pressure on my clit and of the three internal-external vibes I tried (Ida, Tiani, We-Vibe Classic), this one did the trick the most in that arena.

The Experience: The Tiani is another internal-external vibe that is designed to provide extra stimulation during penetrative sex, but I’m here to tell you it’s pretty fun on its own too! Of the three internal-external vibrators in this class, this is the one with by far the strongest internal vibrations. Its super intense C shape brings the internal vibe right up against your g-spot without anything having to push it there. And the vibration settings are somewhat ... inventive.

The Verdict: I wish there was a straight up vibrate-both-clit-and-g-spot-with-the-same-intensity setting. I didn’t love the alternating clit and g-spot setting, because I want it all, all the time. But all in all, a pretty good toy!

The Experience: The We-Vibe is very similar to the Tiani, with a couple notable differences. It’s a bit more flexible in its shape, which means it doesn’t hold the internal vibrator up to your g-spot as automatically, but this also means that you can more easily position the internal vibe exactly where you want it (if you use your hands, another toy, or a cock). The vibration patterns are less experimental, which I actually really appreciate. I guess I’m just a simple gal. The We-Vibe also has the added bonus of wireless charging — it has a dock you just sit it in to charge it! Very sci fi modern.

All in all, after testing these five products, it's clear to me that there are plenty of awesome options out there for people who want to get off hands-free.