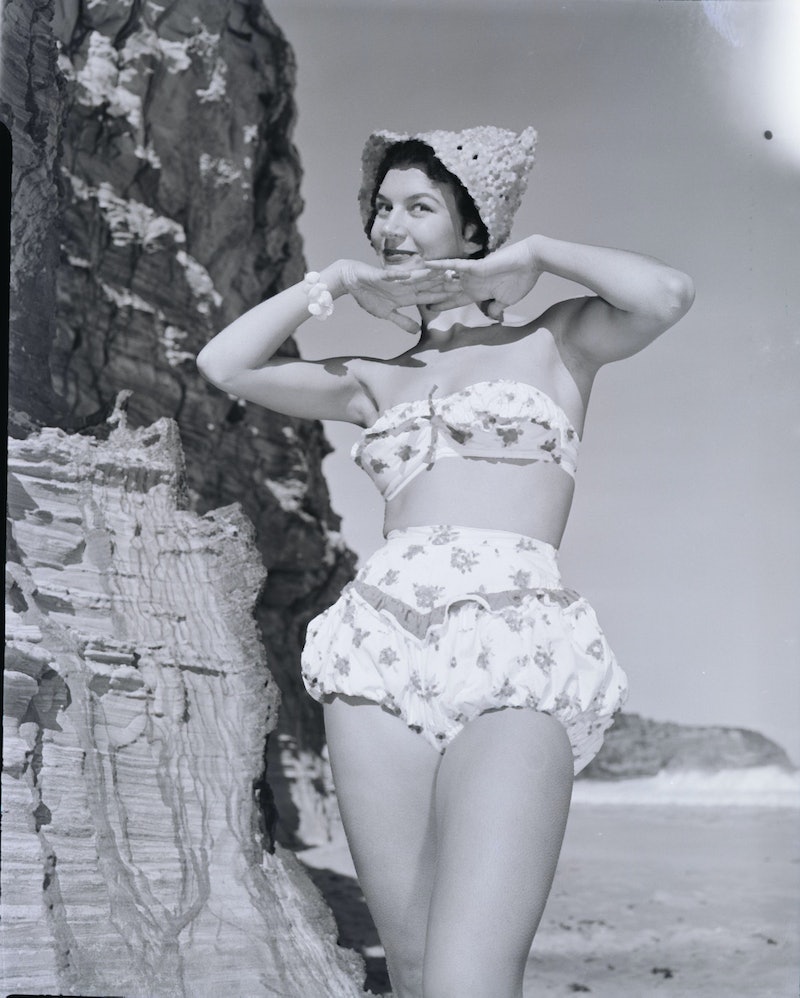 We all know that fashion comes and goes. Trends keep us on our toes, but they also say something about the social climate we live in. And that doesn't exclude bathing suits. Changing bathing suit styles prove one very important thing when studied through archived photographs: That they're very closely linked to social change and, more specifically, the changing idea of what a woman's role in society was during that era. Was she supposed to be demure and puritanical, whereby she was seen and enjoyed, but not heard? Or perhaps she was a rebel, and in the middle of expanding her role in society? Did she want to cast restrictions aside and simply enjoy her life, or did she want to cast her clothes aside and make a point about the patriarchy? While clothes can give us pleasure with their details and their styles, they can also act like a mirror in terms of what's happening around us and what's changing in cultures at large.

While you might not think the little scrap of strings and palm tree prints in your beach bag has anything to say about how society views you as a woman, it actually creates quite the interesting dialogue. Below are 11 photos of women in bathing suits from the 1800s until today, and how their changing styles reflected the changing ways society views women.

Forget bathing suits, these things were bathing gowns. Keeping true to the Victorian ideals of that time, archived photos from the 1800s reveal that women made sure to bundle up for an afternoon at the shore. Dressed in something akin to a princess beach dress, the frock was buttoned up to the neck, covered the racy curve of a shoulder, and hid gams with tea-length hems and ruffled bloomers. According to this photo, some even chose to wore stockings in order to keep their dignity about them. During those times, a woman's purity and chasteness were her greatest assets. A single woman wasn't even allowed to speak to a man unless another married woman was present in the room as a chaperon.

So as you can imagine, modesty was a big deal back then. In addition to the full-on dress the women seem to have worn while jumping waves, they could also rent a "bathing machine" to keep themselves hidden from prying male eyes. It was a little outhouse on wheels that was pulled into the water and allowed a woman to discreetly hop in and out without anyone spotting her in her suit.

According to Victoriana Magazine, "The bathing machine allowed a modest Victorian woman to spend the day at the beach in complete privacy. After the horse would haul the cabana into the ocean, the 19th century woman would change from her layers of petticoats and dress into another layer of swimwear. Later a hood was added to the contraption to allow the female in a soaking wet flannel dress to emerge from the water unseen." When the role of a woman was to be a chaste miss or a proud mother, the clothes reflected as much.

Come the beginning of the new century, we started to see a slow shift in values. The Victorian era was ending, and with it its stuffy ideals and prudishness questioned. The billowy, heavy layers of the 19th century swimsuits were shaved down by a couple of inches to a light dress instead.

Even though the suits still resembled dresses right down to the collars and buttons (and were even made from heavy flannel or wool fabrics so as not to outline the female form too much), the smaller silhouette signaled that the culture was changing.

Swimsuit styles stayed stubbornly frock-like a decade later, but women were beginning to dabble with the idea that they deserved more than just to play house and take care of rosy-cheeked babies. The Suffrage movement was in full swing, more and more women began working outside the home, and women began to believe that they could do just as much as their male counterparts. For example, we began to see an emergence of female athletes around this time, although they weren't able to swim as well with the men when weighed down by wool pleated skirts.

Enter Annette Kellerman, the first woman to swim across the English Channel. She was arrested in Boston for wearing a form-hugging one piece suit that had neither collars nor buttons, but had all the perks of allowing her to cut through water without getting tangled up in skirts. She took one for the team, and her bold move triggered a change in swimwear fashion.

According to Smithsonian Magazine, "Her form-fitting suit paved the way for a new kind of one-piece, and over the next couple decades, as swimming became an even more popular leisure-time activity, beach goers saw more arms, legs, and necks than ever before." Her risqué swimsuit was the first domino to fall.

Enter the flapper era, where women became bored with the modest, seen-but-not-heard Victorian female ideal and decided to create their own. The 1920s flappers were often reckless, daringly sexual, and pleasure-seeking, so it's no surprise that their bathing suits evolved to reflect just that. The suits ditched the sleeves, raised the hemlines, and became tight around the bust and middle. It was now obvious that there was a female body underneath all that, and it was scandalous.

In the 1930s, romper suits became popular and the last of the knee-length bathing dresses went out of vogue. Instead, a flash of leg and a bare shoulder were very much the norm. Times were a-changing: One-third of women worked outside of the home, attended universities, and were finding job opportunities that could just as easily be offered to men.

Hems were up and bathing suits were starting to get their signature spaghetti-strap tops. They were beginning to shift away from the image of the romper that's so associated with the '20s to instead move forward towards the bikini type of styles we're used to in the other half of the century. In the '40s, we saw the beginning of World War II, which meant women had to rise up to the role of caretakers and heads of the family while the men went off to fight. They worked to provide for their family, took up manual labor jobs and desk seats usually earmarked for husbands, and learned to depend on themselves to make ends meet.

While that alone might not sew spaghetti straps onto bathing suits, that type of role changing and newfound strength arguably made women bolder and more comfortable in their agency.

Bikinis! Swimsuit designers were beginning to up the ante in terms of what was acceptable to show in public, and we crossed over to belly baring. With icons like Marilyn Monroe and Brigitte Bardot, sexuality became less shocking and more pop culture. Swimsuits were still often high-waisted and sometimes resembled a skirt of sorts, while the top was usually a halter/bra hybrid that kept you modest but still sizzling on the beach.

What did we have in the '60s to influence fashion? Second Wave Feminism told women everywhere to screw the patriarchy and wear whatever the hell they wanted, when they wanted. The hippie era and its free-love advice suggested that you embrace your body and share it without shame. Birth control hit the shelves and started to help facilitate sexual agency even further. A lot of things were happening in the '60s that helped edge the bikini into its iconic style. It was itsy, bitsy, teeny, and weeny, and it told the public "the more skin, the better."

That was proven with the invention of the monokini — the first women's topless swimsuit — by designer Rudi Gernreich in 1964. It doesn't get teenier than that.

The '80s had an aggressive sort of sexuality to it — sculpting your body in the gym became very much in vogue; being a forward, tell-it-to-him-straight type of woman was the pinnacle of independence; and women began to take charge and push against the glass ceilings in corporate America. With all of that ambition also came a new bathing suit form: One just as forward as the woman donning it. We saw high bikini lines that highlighted the hips and elongated the legs, as well as smaller bikini bottoms that flashed more cheek than before. Women in the '80s seemingly had confidence in themselves, their sexuality, and their charisma, and so they showed it.

Women's independence only continued to grow in the '90s, while the idea that you only need to rely on yourself to reach your goals and make yourself happy started to become a way of life. Huffington Post pointed out, "The 'I don't need no man' attitude became prevalent in the '90s. Shows like Murphy Brown, Sex And The City, and Living Single all featured women living independent lifestyles deep into their '30s." And the bathing suits reflected that: Cuts were risqué, cleavage was emphasized, and prints and colors reflected that of the woman's personality.

Today, anything goes. You can cover up or strip down to a thong. You can choose any cut or silhouette you want, flash as much tummy or butt as you wish, and feel comfortable regardless of who's looking. Oppressive bikini body advertisements are still a thing, but with the body positivity movement, we're seeing women of all sizes rocking whatever types of bathing suit styles they fancy. And with social movements like "Don't Tell Me To Smile," a woman doesn't have to feel like she's putting on a suit for the male gaze, but for herself. You can choose anything that makes you the happiest.

Whether it's bathing gowns or neon-colored thongs, it's interesting to see how the bathing suit has changed according to how women were viewed in the social climate of their era. Here's hoping we keep on the path of progress.

More like this
I Tried Kendall Jenner's No-Pants Look As A Plus-Size Woman
By Sarah Chiwaya
Instagram & Facebook May Finally Lift Their Notorious Nudity Ban
By Allie Fasanella
All Of 2023's Biggest Nail Art Trends, According To Top Manicurists
By Jordan Murray
'Love Island's Will Got A Farm Animal Manicure & It's *Adorable*
By Sam Ramsden
Get Even More From Bustle — Sign Up For The Newsletter
From hair trends to relationship advice, our daily newsletter has everything you need to sound like a person who’s on TikTok, even if you aren’t.