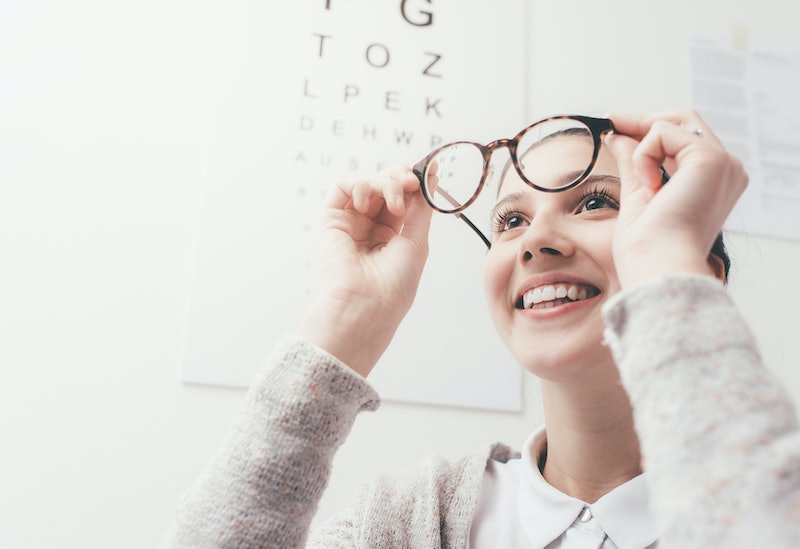 I wish I could say I was one of those people who always wanted glasses growing up, but alas, I actually had them instead. Because I was cross-eyed. And farsighted. At the age of three. Thankfully, I've been spared any serious issues for a while now, but I'm no stranger to the Opthalmology Department. That's why I appreciate that UK-based treatment center Clinic Compare has created a series of GIFs illustrating what it's like to be visually-impaired in an effort to raise awareness about common vision loss problems. The project also proves that GIFs can be used for greater purposes than just, like, clips of cats scaring themselves. I can get behind that

The GIFs, which I am assuming feature classic London scenes (I've never been there, but the first image features a man in a suit covered in Union Jacks, so... I'm making an educated guess), alternate between 20/20 vision and a series of visual impairments, including cataracts and glaucoma. To be honest, I've now convinced myself that I have both of those problems, so maybe I need to step away from the WebMD for a minute to get my bearings.

Though it's unlikely for the majority of people to be experiencing most of these diseases anytime soon — a good number of them are age-related — it's still important to keep an eye (heh) on your vision. If you notice any cloudiness, floating specks, or peripheral blurriness, head to the eye doctor. You should head there once a year anyway, to be honest. Big proponent of eye health over here.

Here's what it's like to see through four different visual impairments — because knowledge is power, you know?

Cataracts are generally described as "eye cloudiness" (I mean, when you have them, the normally transparent eye lens becomes cloudy, so...); they tend to affect older folks. By the age of 80, more than half of Americans will either be suffering from cataracts or have had cataract surgery.

The leading cause of vision loss for people over the age of 50, AMD causes damage to the macula, which is a part of the eye that affects central vision — hence the spotting in the middle of this image.

Glaucoma actually refers to an umbrella of conditions that cause damage to the optic nerve, which connects the retina to the brain. Not-so-fun fact: Fetty Wap lost his eye to congenital glaucoma as a kid, following an accident.

As is (hopefully) clear from the name, you're not in danger of developing this disease unless you're already suffering from diabetes. Diabetes causes the body to struggle with regulating blood sugar; chronically high blood sugar can cause the blood vessels located in the retina to leak fluid or blood.