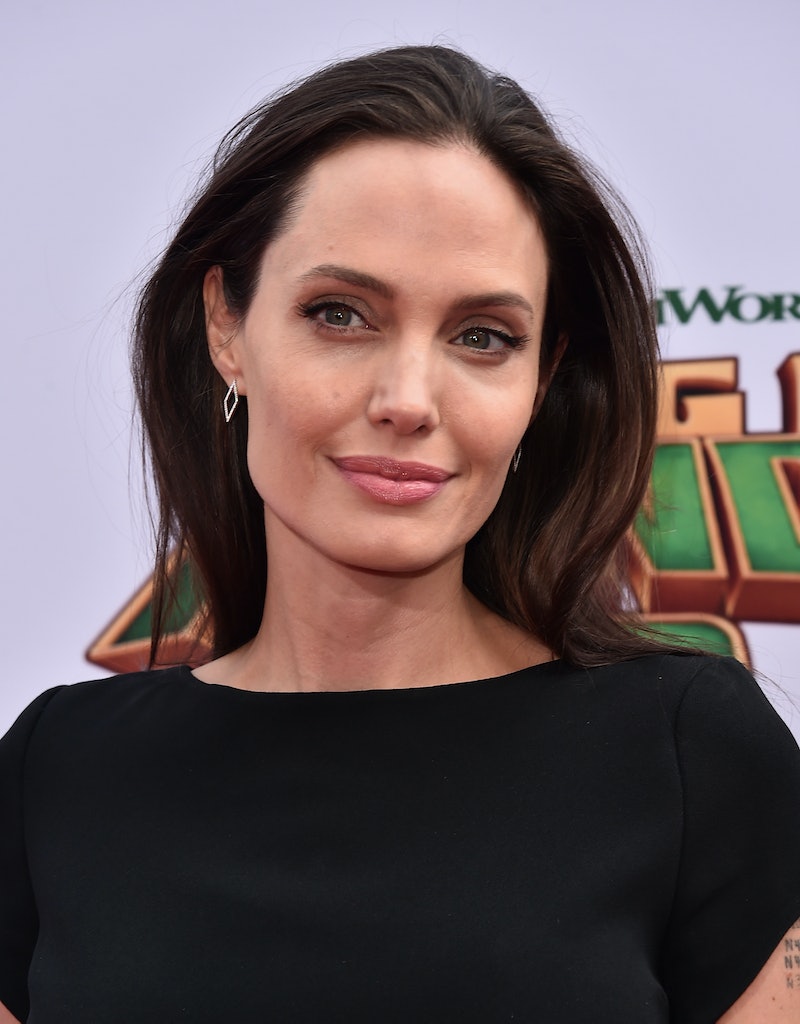 It's official: Angelina Jolie loves getting inked. Angelina Jolie recently got three new tattoos covering her upper back. As you can see in the photo below, they are definitely real, but what do Jolie's new tattoos mean? Well, not only are her new tats huge, but they are also quite meaningful. I mean, would you expect anything less from the 40-year-old actor who already is said to have 20 tattoos?

Per a source who spoke with People, Jolie's tattoos are "Buddhist blessings for peace, love, and a prosperous life." The ink designs are reportedly in the yantra style, which is a "traditional Buddhist form of body art that originated in Southeast Asia." People also reports that yantra tattoos are usually "hand-etched by Buddhist monks and special ruesi practitioners, requiring meticulous skill."

The By the Sea actor's new tattoos are similar to the one she already has etched on her left shoulder blade, which she got after adopting her son Maddox with husband Brad Pitt. Obviously, it's no secret that Jolie has a lot of permanent art on her body. In December 2015, she got what appears to be a geometric design on the inside of her left arm.

As for her other tats, one represents Pitt's birthplace of Shawnee, Oklahoma and she has another one on her arm showcasing the birthplaces of her six children. This tattoo previously read "Billy Bob" for Jolie's former husband Billy Bob Thorton, but she had it covered up. Actually, Pitt also has a tattoo in honor of his family displaying each family member's initials, per Us Weekly.

Basically, when it comes to tattoos, Brangelina makes sure they symbolize something special.

More like this
The $6 Drugstore Beauty Product Taraji P. Henson Uses Every Single Day
By Danielle Sinay
Sarah Jessica Parker Will Change Your Outlook On Aging
By Rachel Lapidos
Regé-Jean Page On The Art Of Power Napping
By Paris Giles
Lindsay Lohan Is “The Luckiest Woman In The World” After Her Marriage
By Grace Wehniainen
Get Even More From Bustle — Sign Up For The Newsletter